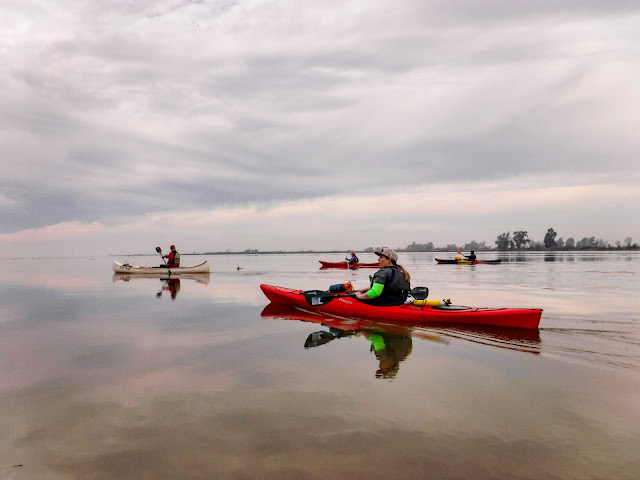 On Monday, January 28th, 5 of us launched from the Antioch Marina at 10:14 am at the height of the incoming tide.  It was a windless day with high clouds above us.  The day couldn't have been more perfect with not even a ripple on the surface of the water. 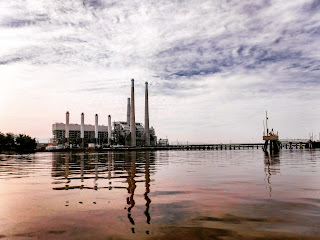 The first hour or so we paddled against what was left of the incoming tide.  As we approached Pittsburg the tide began to slowly turn and helped us gain speed as we made our way down the San Joaquin River.  The south side of the river made for an industrial type paddle. We hugged the south shore all the way to Martinez and glided past commercial enterprises such as US Posco steel, Dow Chemical and PG&E.  After the PG&E plant there is a good deal of wetland marsh along the Bay Point Regional Shoreline up until Port Chicago. 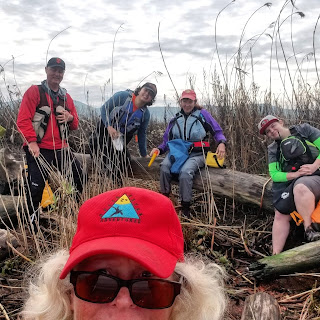 We stopped for lunch at Middle Point adjacent to the Bay Point Regional Shoreline. The tide had turned, but there was not a lot of areas to choose from to get out that were beach like. We found a gravelly rock covered spot for just enough room for the 5 of us.  We covered nearly 10 miles in approximately 2 and a 1/2 hours and we average 3.2 miles per hour. 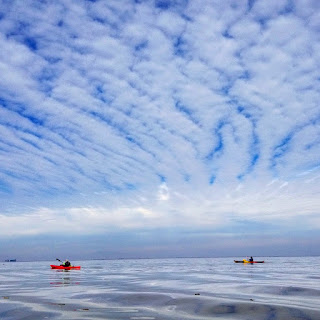 On this 1st part of our journey we encountered a couple of river otters, dozens of cormorants and  hundreds of gulls.  There were seals and sea lions on every channel marker buoy along the way. Their barking kept us company as we paddled downstream. 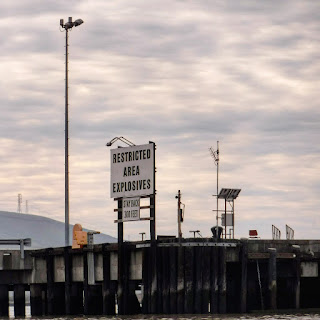 The 2nd part of our journey began after lunch as we made our way to port Chicago. Port Chicago was an extension of the Concord Naval Weapons Station, and is known for the location of the Port Chicago disaster in July of 1944 where over 300 soldiers were killed while loading a munitions ship. As we paddled this area it gave us a sort of an uneasy feeling, with huge signs posted "Restricted Area Explosives." We noticed a channel ahead that we thought would make a great shortcut but as soon as we began to enter the channel someone over a loud speaker told us we were in a restricted area and needed to leave. So we ended up paddling north around Seal islands and then gently made our way closer to shore as we paddled the Suisun Bay. 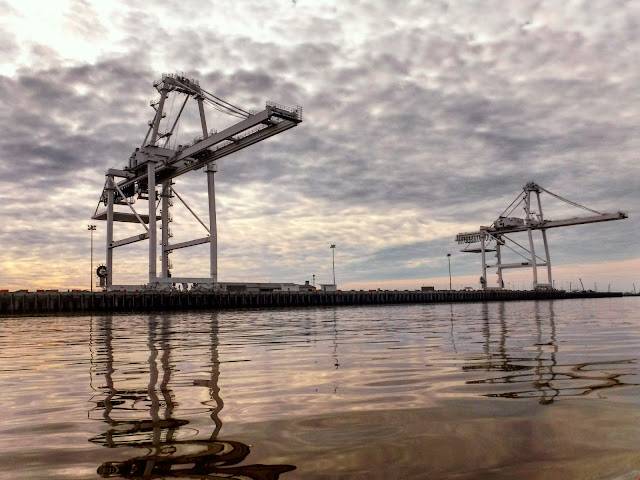 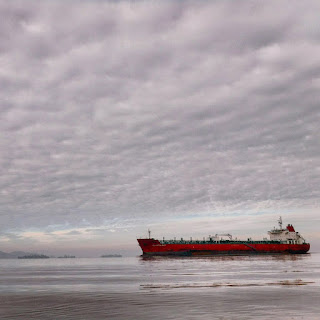 We continued to paddle on glassy waters and witnessed several grebes coming up to the surface and then bobbing back underwater and a couple more seals poked their heads out of the water. Behind us, a large ship began to approach and we made sure that we were out of the shipping channel so it could pass us safely. It was hard to judge distance, especially due to the haze but we watched silently as the ship passed and approached the  Benicia bridge.  We could see the mothball fleet north of us sitting faintly in Suisun Bay. 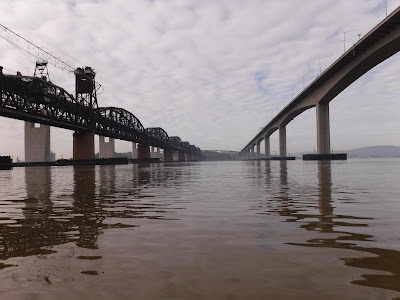 We passed under the Benicia bridge and I marveled at the structures above. The new span versus the old span, and then the old railroad bridge, built in 1930, which is still in use today, was something to behold.
There was a large tanker docked just after the bridge named Socrates. We paddled past as water from the bilge exploded out of the side of the tanker.  It took us less than 2 hours to reach the Martinez Marina after lunch. 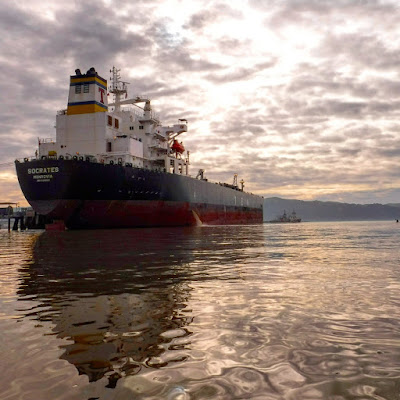 The narrowing of the waterway from Suisun Bay to the Carquinez Strait increased our speed along with the increase in speed from the tidal outflow, made for an extremely easy paddle.  We averaged 4.2 knots the last 9 miles of this trip. It was an amazing day with a great group of friends and I can't wait to paddle East on the North side of the river and bays! 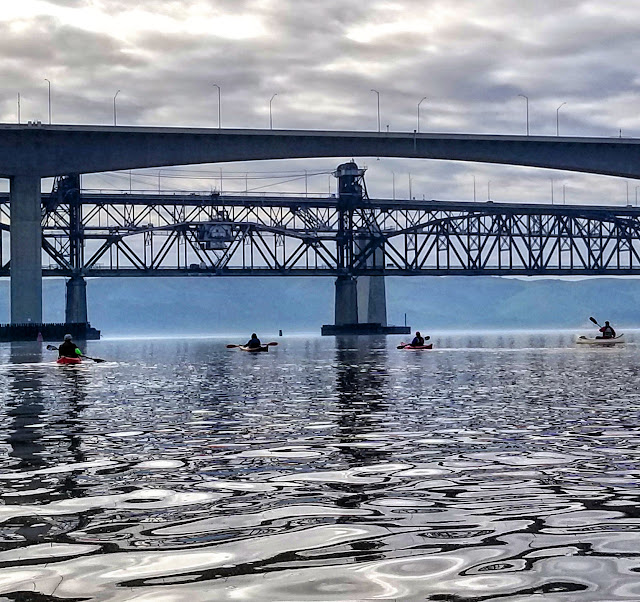 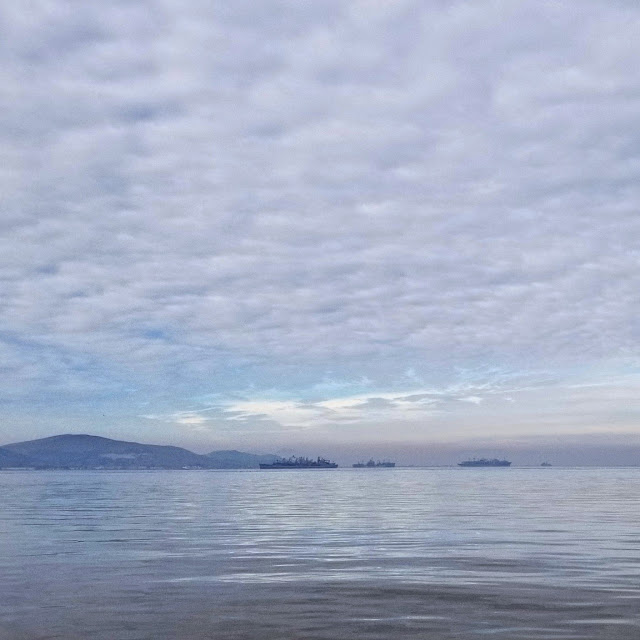 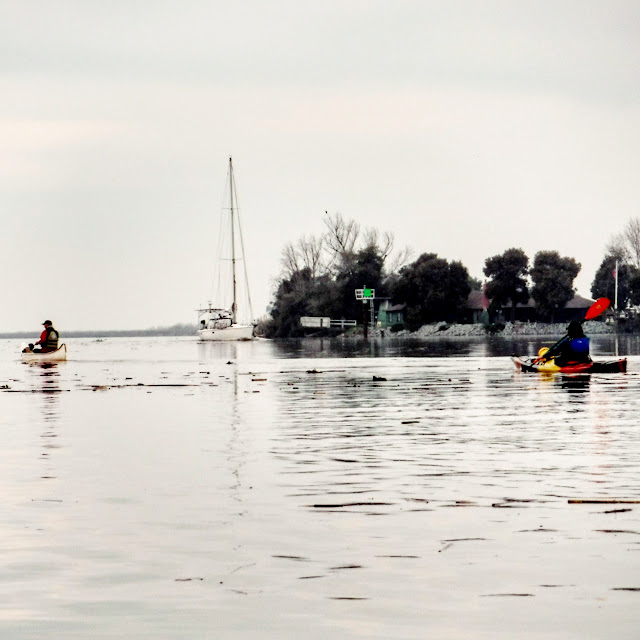 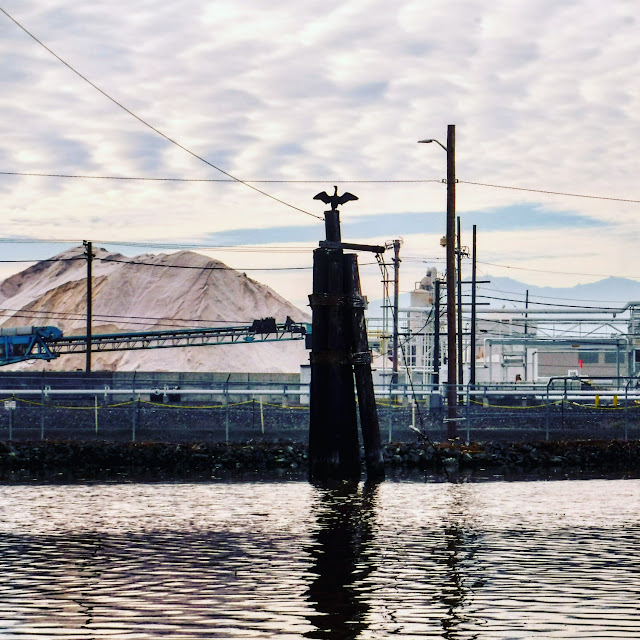 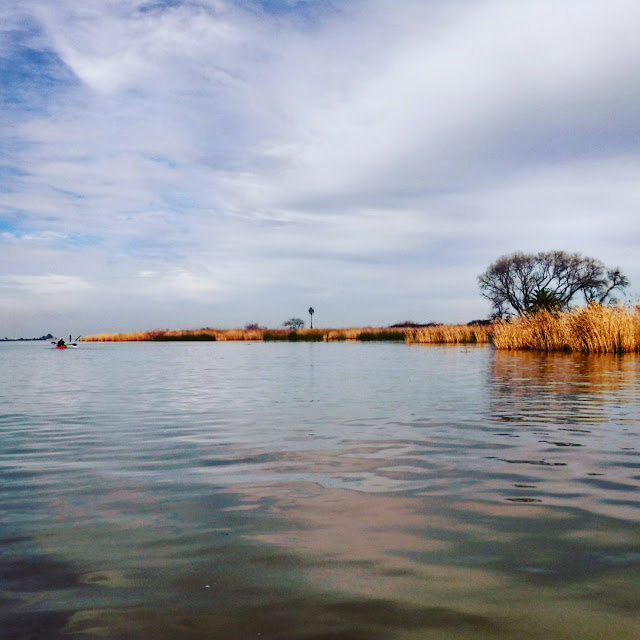 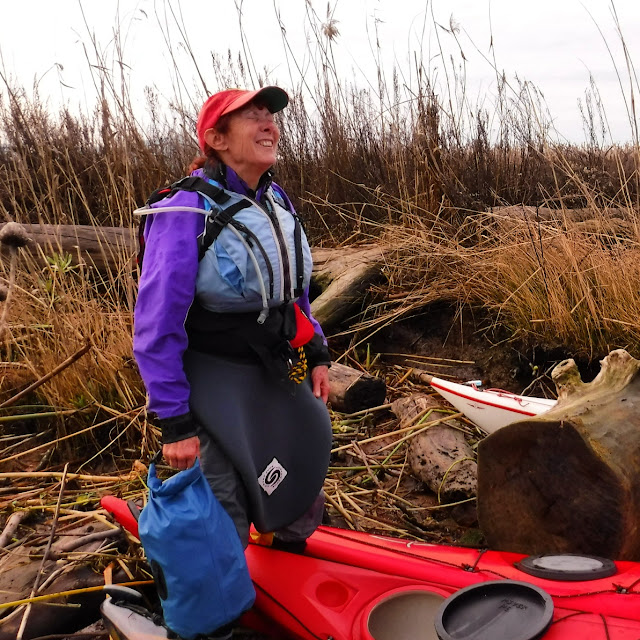 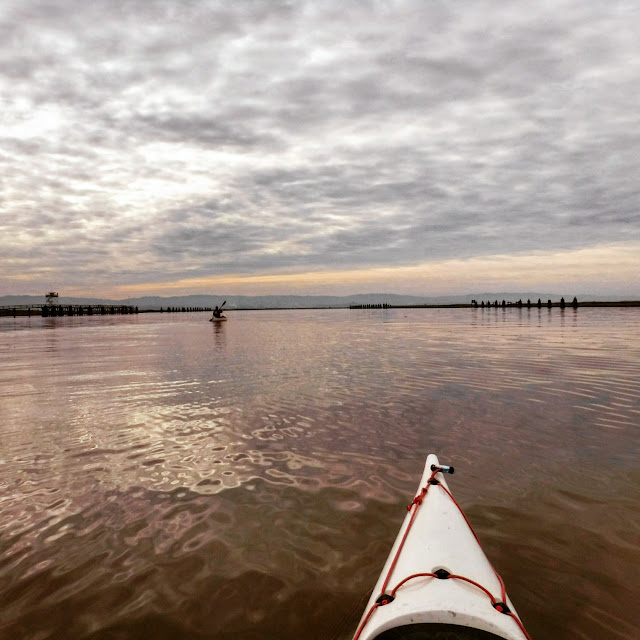 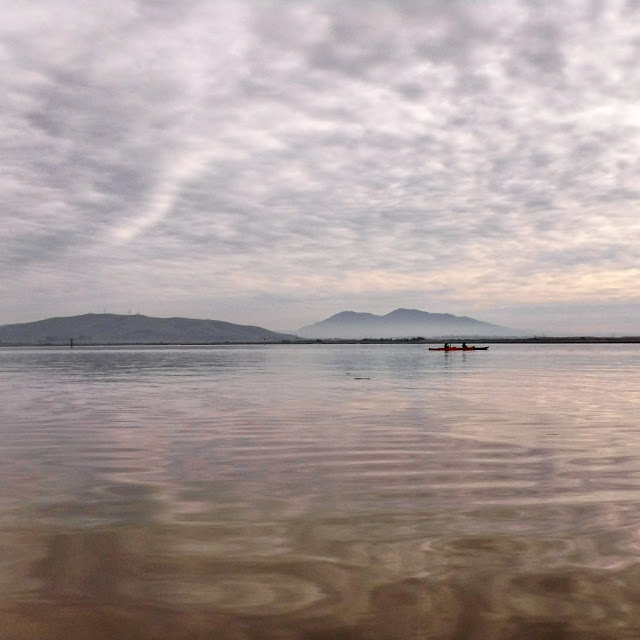 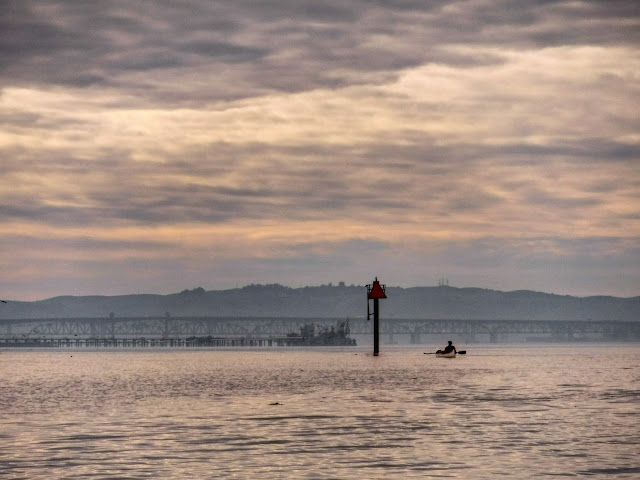 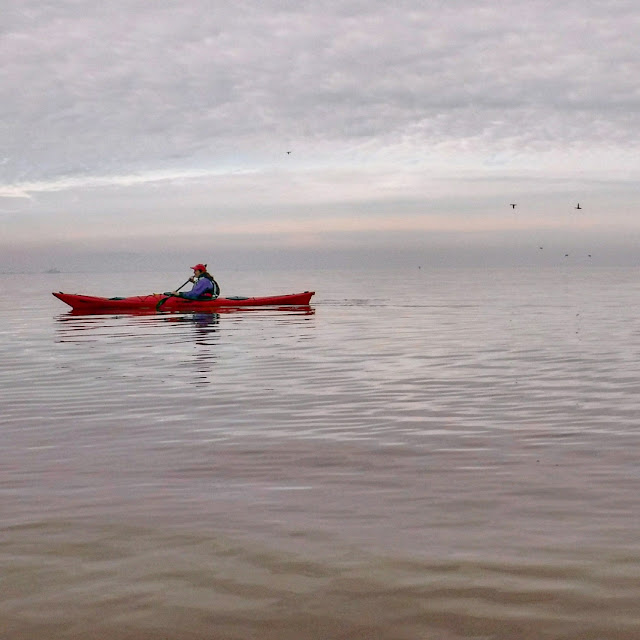 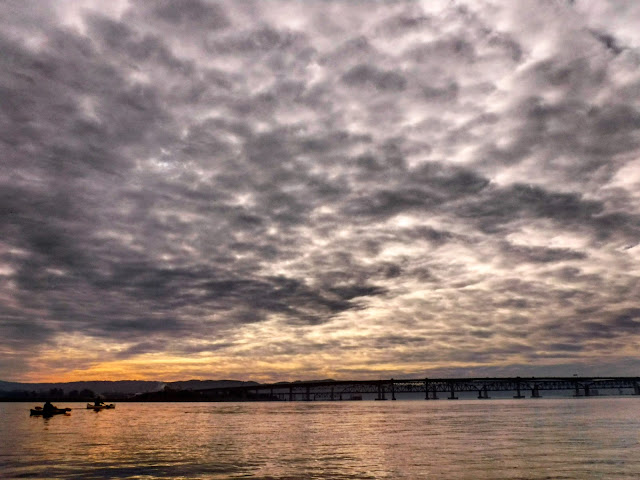 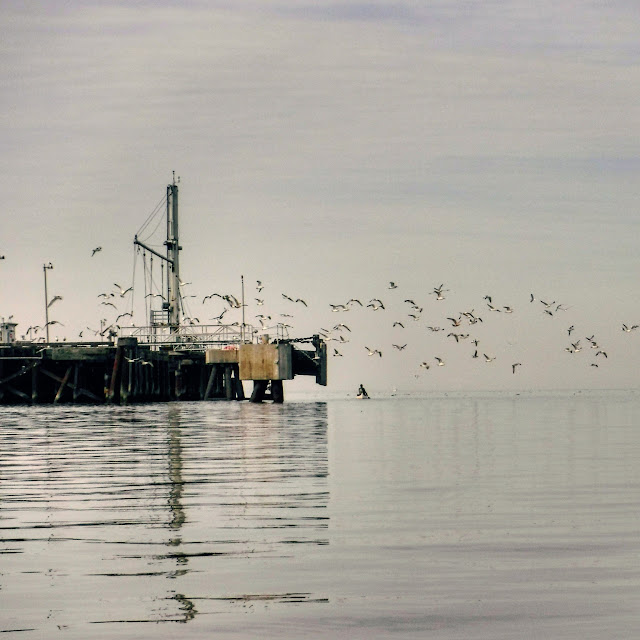