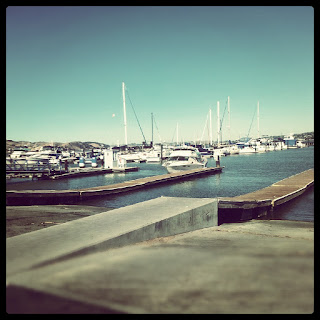 Last Monday my son and I went for a quick paddle to check out the Martinez Marina. There was a small craft advisory for that afternoon but when we arrived at 11:00 the wind was blowing at least 15 knots and there were white caps sprinkling the Carquinez Straits. The Martinez Marina is a nice place to launch if you want to explore the Carquinez Strait Regional Shoreline. There is no fee to launch for kayaks if you carry your boat to the launch, otherwise it's $10. We didn't have a lot of time to explore but it piqued my interest enough to want to return. The winds and current here can be very strong so check tides and weather before you head out. 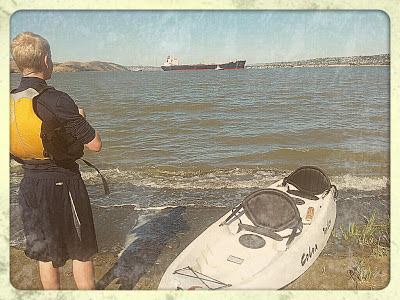 It was beautiful inside the harbor as we paddled out. Once we exited the harbor we were hit with a strong head wind and broaching waves. The current was also against us and we decided to stick close to the pier and head towards a small beach we saw in the distance. There were many fisherman fishing from the pier so we needed to be very careful as to not paddle too close to their lines. We reached the beach and talked about whether we should continue and watched a couple of tugs push and pull a large tanker. We decided it was best if we saved this paddle for another day. Our return was speedy with the wind at our backs and current in our favor. Waves were breaking over our boat so it wasn't a dry ride but it was fun. I'll update this post the next time I visit but my first impression was very good.
Posted by Kathy Bunton at 3:12 PM No comments: 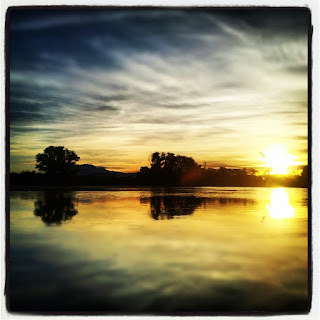 It was a gorgeous evening out on the water tonight. It was 78 degrees when we launched at high tide a little after 4:00 p.m.. I attempted to fish using a small jig but didn't catch anything but weeds. I switched to some power bait with the same results.

We decided to put the poles away and just paddle around and take in the peaceful evening. We saw a few great white herons and hundreds of mud ducks. After awhile I decided to put my line back in the water with a rubber worm. On the second cast I got a bite and thought I set the hook but the little guy escaped just as I got him close to the boat. At least my daughter got it on video so the rest of my family would know I wasn't telling fish tales.

I wonder if there is a world record for smallest fish ever caught. I think I have a good shot at breaking that record if there is one. It's probably better that I stick with the small ones because I wouldn't know what to do if I actually caught something worth eating.

Any day on the water is a good one, and I'm blessed that I can share days like this with my family and friends! 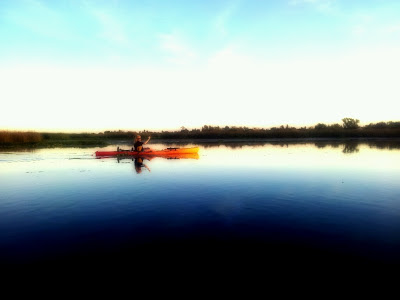 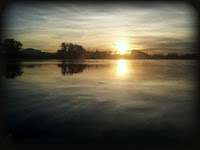 Posted by Kathy Bunton at 11:00 PM No comments: 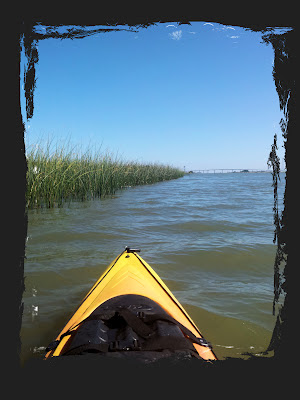 Today my friend Mary and I did a little exploring in our own backyard. We launched from the Antioch boat ramp and paddled across the deep water channel, about one fourth of a mile, to Kimball Island.


There was a stiff breeze blowing when we launched and the current was flowing eastward at high tide. The water was choppy in the channel and the weather was warm, mid 70's. We soon found a beach on the southeastern tip of the island and decided it would be the perfect place to eat lunch. As we approached, we found the skeletal remains of an old boat surrounded by beautiful Nodding Bur Marigold. The sandy beach provided shelter from the wind and had a couple of logs that we used as benches to sit and eat. 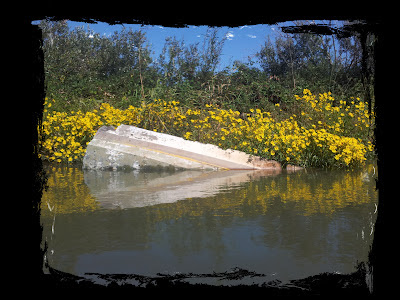 After lunch we paddled east and almost immediately found the entrance to Cabin slough. We entered the slough and headed northwest towards Broad slough. Cabin slough is just over a mile long, and about a half dozen small homes and cabins line the eastern shore. 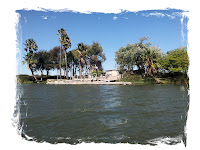 As we paddled at a relaxed pace, we observed quite a few wrecks scattered throughout the slough. When we came to the end of Cabin slough, we noticed the wind had picked up quite a bit. According to the wind report from Windfinder.com, the winds never exceeded 15mph but the waves were quite steep for so little wind. The waves made for an adventurous paddle across the channel. We pointed our boats toward the entrance of the Dow Wetlands and paddled hard, keeping our eyes peeled for ships that might cross our path. I shot a little video but had to put the camera down so I could concentrate on paddling. It was less than half of a mile to the Dow Wetlands but it seemed to take a long time to cross the channel. 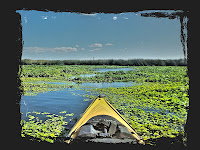 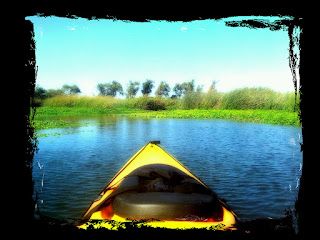 Once we entered the wetlands the wind and waves disappeared and we paddled lazily through the preserve. On our way out I noticed an opening through the reeds that I hadn't noticed on previous trips. We decided to do a little more exploring and we're treated to a beautiful view of the heart of the preserve. A dazzling meadow like carpet of green surrounded by tall reeds. As we left the peacefulness of the preserve, a river otter ducked under the carpet of green. Our only wildlife sighting of the day, besides a couple of ducks and a sea gull. On our return to the launch we had the wind at our backs and the waves pushing us homeward. Overall we paddled a little over five miles.

What a great day!