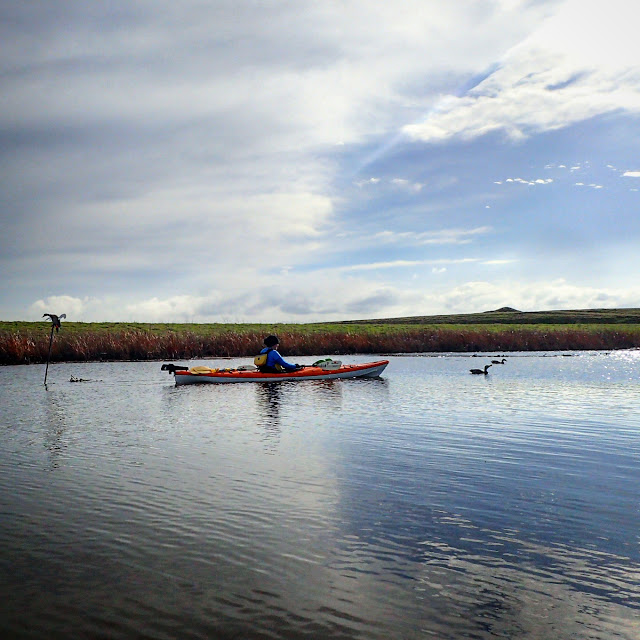 For the first time in many days, the sun broke through the clouds and bathed us in its' 55 degree warmth. We launched from Rivers End Marina at  12:15 and paddled south on Old River. High tide was predicted at 12:29 at Grant Line Canal. Rivers End charges $10 to launch but they do have very nice facilities, including a little store and clean restrooms.

There are multiple directions you can paddle from this starting point but we decided to head south on Old River. There is a discrepancy on Google maps about which river runs south. Google has labeled it Middle River but according to NOAA chart 18661 it's actually Old River. Caution must be observed shortly after launch because this is where the intakes are for water sent to So. Cal., and the currents can be extremely dangerous near the gates. We were told they were pumping 3500 CFS Friday. There is no need to pass directly in front of the gates as you can make your way around Hammer Island and proceed in any direction you wish. 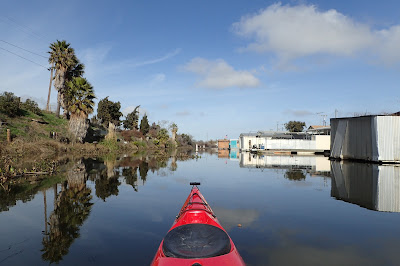 I was concerned with flow direction because the pumps can reverse flows but on this day, paddling with what was left of the incoming tide worked in our favor. We made our way at a leisurely pace while checking out the numerous little islands. Once on Old River we observed lots of tule lining the banks of the levy interspersed with many trees. We reached Mountain House creek about an hour after launch. We spotted something moving in the distance and paddled slowly towards it only to discover a duck decoy with movable wings on a some sort of mount. We promptly announced our presence and were jovially greeted by a hunter camouflaged in his aluminum boat. We apologized for our intrusion and he said that he was just getting ready to leave and asked if he could take our picture with his decoys. We were happy to oblige and then continued our exploration of this small creek. 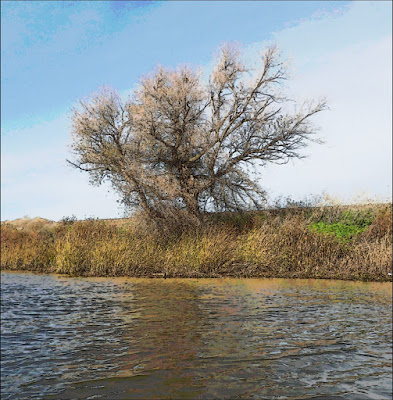 After dawdling around the creek for awhile we made our way back to Old River and began our paddle home. We were accompanied by dozens of buffleheads and coots. Three unidentifiable owls swooped beside us gliding inches above the water before ascending into nearby trees where they were quickly chased from by a couple of agitated hawks.

We decided to attempt to paddle around the north side of Hammer Island before heading back to the launch. We soon encountered immense pockets of hyacinth and then were alerted to a large danger sign warning us of fast water. We decided to go back the way we came and followed a small boat through the thick invasive weeds back to the put in.


This is a lovely area to paddle with many exploration possibilities. I look forward to returning soon!

Posted by Kathy Bunton at 2:37 PM No comments: