Last week I had the opportunity to paddle Drake's Estero with a good friend.  This trip had been on my bucket list for quite some time and the conditions on Monday looked like they couldn't be any better.

Low tide was 3 and a 1/2 feet at 11:08 a.m. with high tide predictions at 4:44 pm at 5.3 feet.  Several sources strongly recommended paddling with at least a 3ft tide and I definitely concur.  When we launched shortly after 11:00 a.m. there was just a gentle breeze from the North West. With the breeze at our back, we paddled at a leisurely pace down Schooner Bay taking in the beautiful scenery. We spotted dozens upon dozens of harbor seals sunning themselves on beaches and playfully swimming all around us.  According to the National Park Service Drake's Estero is home to the largest Harbor seal breeding colony in Point Reyes.

Drakes estero and Limantour estero are closed to all types of boating March 1st to June 30th to protect harbor seals from disturbance during pupping season. The NPS has a great video of its' restoration project and photographs of the estero.

After about an hour and a half we found a gorgeous beach on Drake's Head.  After lunch we wandered among the tide pools and spotted sea anemones, hermit crabs and other marine life in the tide pools.  After our relaxing lunch we launched and headed towards Limantour Estero. The breeze was just starting to pick up a little but was still at our backs for the most part. The wind direction did change from north west to to north east and back-and-forth. We explored Limantour Estero for awhile then realized it was just after 3:00 p.m. and we should start heading home. 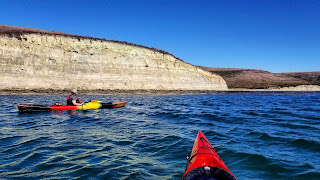 We pointed our kayaks west and immediately noticed an increase in wind speed. The tide had turned and was now flooding and the wind was opposing the current making for some choppy conditions. We paddled about a mile before we tucked in to a protected cove to reassess the conditions. The wind was now steady at 15 knots and gusting to just over 20. We noticed at Drake's head where the Estero enters the ocean, were rogue waves spilling in and braking abruptly. With determination and lots of bracing, we paddled against the wind and current past Drake's head where we finally caught the incoming tide. 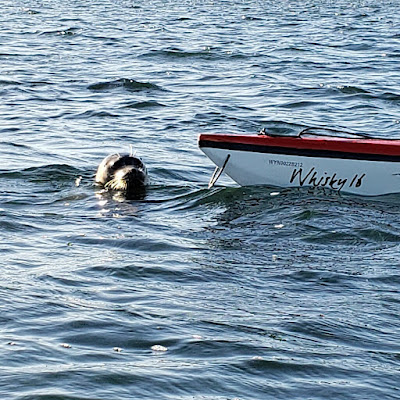 I have to admit that mile was pretty sketchy and nerve wracking because the waves were breaking and not in any sort of pattern that could be predicted. I reassured myself that if either of us capsized we wouldn't have a problem getting to shore to seek shelter and wait it out. After getting by Drakes Head, with the help of the tide and reduced wind speed we were able to paddle at a much more relaxed pace. As we were making our way back to the launch, a baby seal, not much longer than 3ft, poked is head out of the water a couple feet from my kayak. He startled me but with those puppy dog eyes I was put at ease at least until he started swimming under my kayak and bumping the bottom of it. He stuck with us for at least an hour, going back and forth from my kayak to Kelseys' and nibbling on my stern toggle. He would pop up inches from our kayaks and then swim to the rear and I really think he was trying to figure out how to get on the back deck of our boats. Fortunately we had gear on the back deck which didn't leave room for a baby seal. 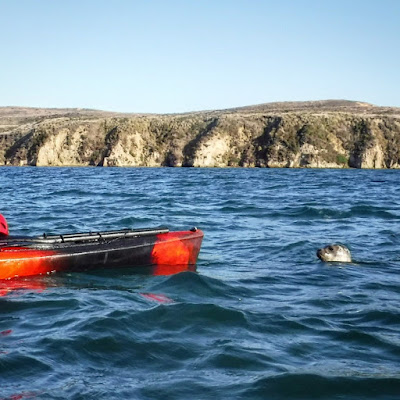 By the time we reached the put-in, the wind had died down and the estero was like glass once again. We had paddled 12.76 miles overall. It was an absolute fantastic adventure and look forward to returning.

Drakes Estero is a great paddle destination and there are lots of options for both beginners and more experienced paddlers. Be aware of your skills and plan ahead with a float plan. Check tides and weather, have a bail out plan and dress for immersion. It's a very remote area so be prepared for any situation.

Posted by Kathy Bunton at 3:09 PM No comments: 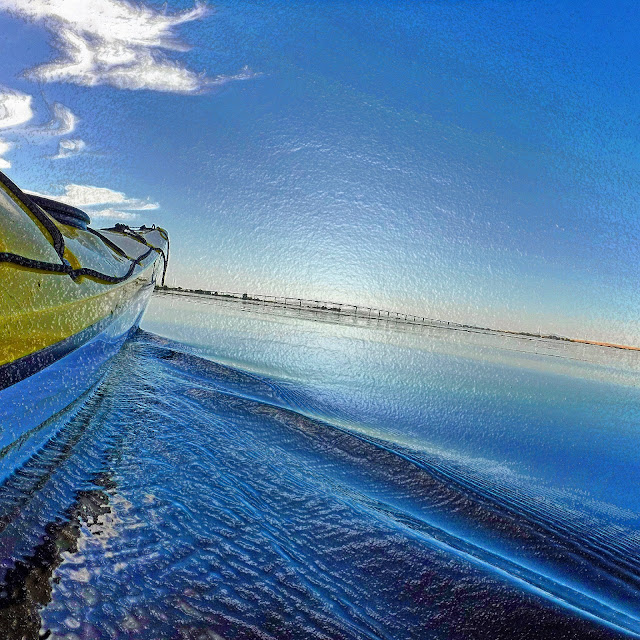 I've been on the water nearly every day the past couple months so haven't had a chance to write.  We've been enjoying some beautiful weather and doing lots of tours including trips to Delta Meadows, Sherman Island  and round trip tours from Antioch to Big Break to to name a few.  We've had Adventure Camps for kids and  Rescue Clinics and Fundamentals of Kayak Touring for adults.  It's been a busy summer and I'm very grateful.

I'm looking forward to fall and winter paddling, my favorite time of year.  We have some great tours coming up including our next Dive in to the Delta series number 3 with a trip to Sherman Lake on November 23rd starting at 2 o'clock. The birds are coming in, more wildlife is being spotted and the weather has been amazing. 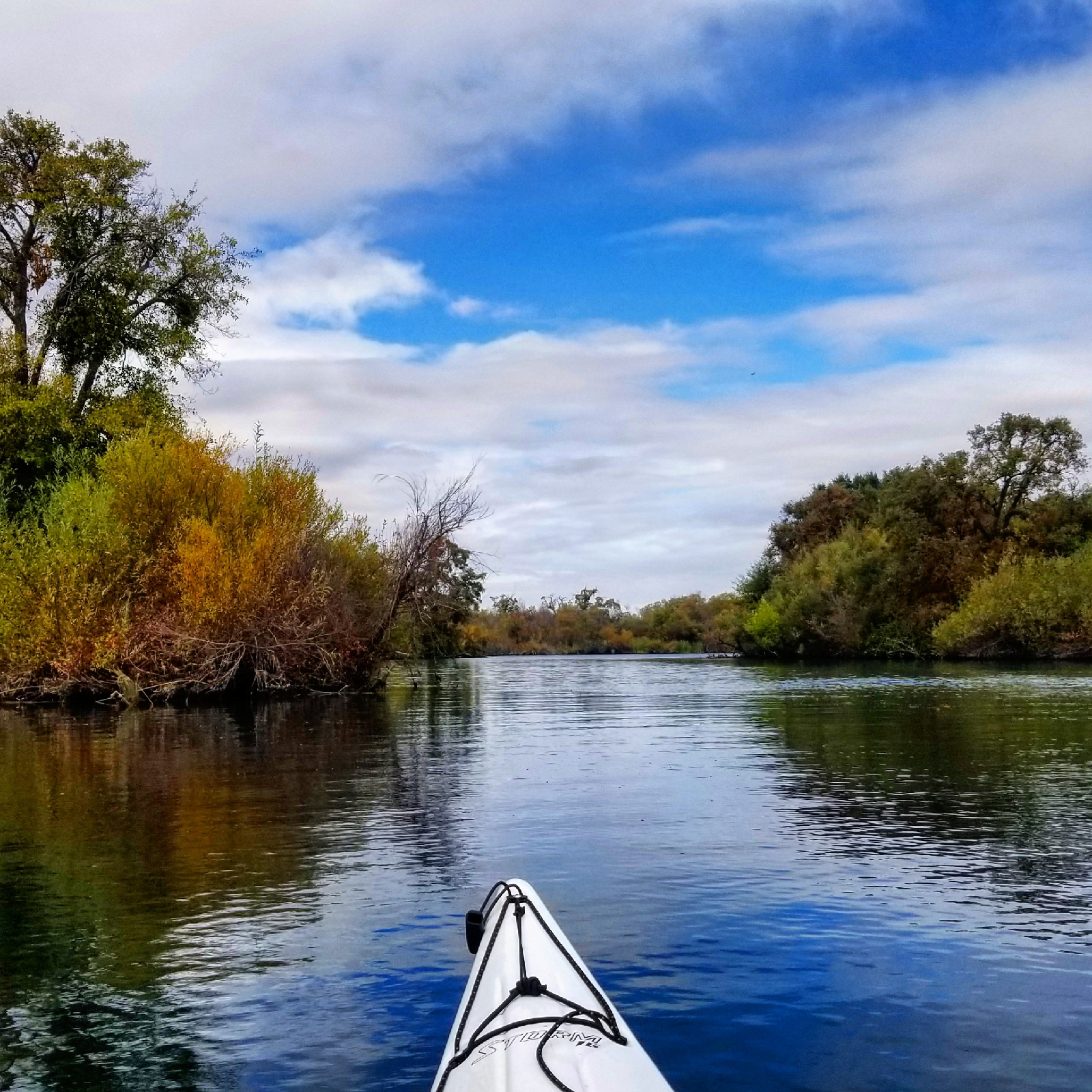 Keep an eye on our calendar at our website or on our Facebook page for upcoming tours and classes. You are always welcome to create your own custom tour or class for your group. Contact us for more information or to set up a date for your group.

Just a reminder we have TRAK kayaks available for demo. TRAK 2.O is the ultimate touring kayak. Not only does it pack up into a bag that can be taken easily on planes, trains and automobiles but it is a true performance sea kayak that must be seen and paddled to be appreciated. We'll be teaming up with TRAK in 2020 to offer some amazing camps where you will gain skills in sea kayaking and get to know your TRAK better. Stay tuned for more information!

This past Monday I was able to paddle Drakes Estero and I'm currently working on a write-up which will be posted soon. It was an amazing adventure! 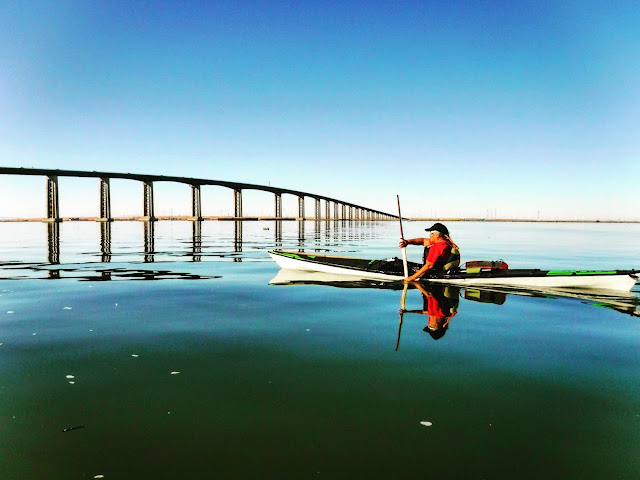 Posted by Kathy Bunton at 3:21 PM No comments: