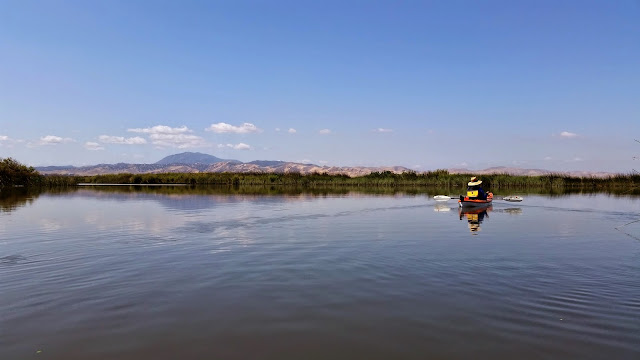 We had an amazing day on the water today! We launched from the Antioch Marina boat ramp just before 8:00 am and caught what was left of the slack tide. There was barely a breeze and only small riffles disturbed the water surface. We paddled across the San Joaquin River and headed east towards Kimball Island. 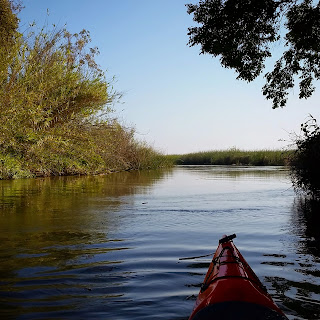 We paddled against a gentle current until we reached Cabin slough where we caught the outgoing tide that led us to an entrance into Sherman Island Waterfowl Management Area. I carried a marine chart and topo map and had planned our route ahead of time. I'm thankful that I also had the US Topo Map ap on my phone to track our progress with gps. I don't believe the physical map and chart have been updated lately and the invasive weeds had many channels blocked. In fact, the original route I had planned was impassable.

I highly suggest having a gps if you plan on exploring this area. The area has multitudes of sloughs and channels to explore but it is very easy to get lost or disoriented. We ended up following a channel north that opened up to more small waterways and the gps with the Topo map ap helped us find open water. 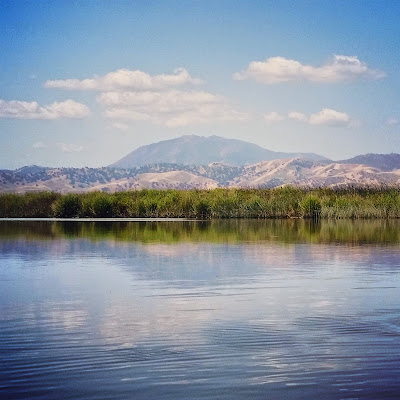 Once in open water we headed to a small island with a nice sandy beach to stretch and have a snack. There are actually two islands across from Sherman Island County park that make nice stops when the tide is low enough.

After a short break we headed southeast following the riprap to Mayberry Cut. Once we reached the cut we stayed left and followed the edge of  Donlon Island until we reached an opening and decided to do some more exploring. We ended up spotting a raccoon walking on top of primrose to reach a tule covered island. Fish were jumping all morning and Caspian terns were catching lunch. We exited Donlon Island and made our way back to the San Joaquin via Mayberry Cut. 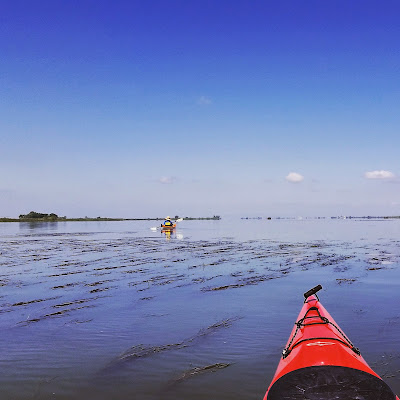 If you stay on Mayberry Cut the current here can be very strong as it meets the San Joaquin River. It was moving at least 2 knots as we paddled and there were lots of eddies and swirling currents that kept our attention. We saw 4 otters swimming against the current next to shore and then we spotted them on the muddy shore but when they saw us they quickly returned to the water and disappeared.

We reached the San Joaquin and it was moving at a good clip so we caught the current and it made for an easy ride home. This area is so beautiful and has unlimited exploring possibilities. At lower tides there are many potential landing spots. I am blessed to have this true wilderness area in my backyard!

WARNING: WINDS ABOVE 8 MPH CAN CREATE 1-3 FOOT ROLLERS COMING FROM MANY DIRECTIONS - ALWAYS CHECK WEATHER FORECAST AND DRESS FOR IMMERSION!

Posted by Kathy Bunton at 4:48 PM No comments: