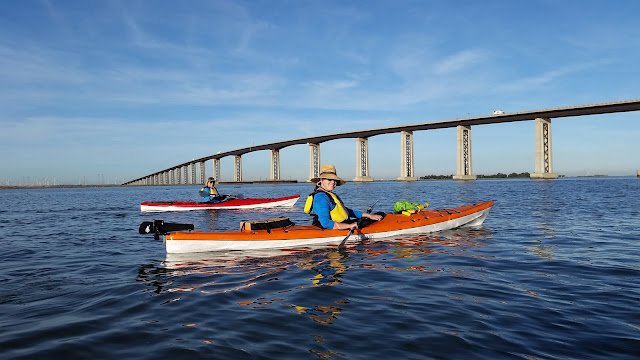 We had a wonderful paddle earlier this week. One of the things that I love about the Delta is the endless paddling opportunities available so close to home. This past week we took some time to explore Donlon Island which is basically a small lake just north of Antioch. 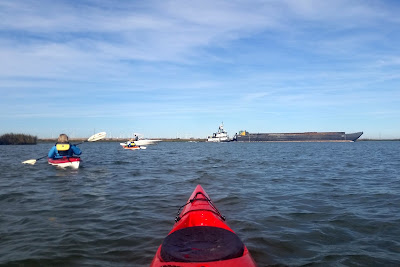 We launched from Lauritzens with the ebbing tide and paddled across the San Joaquin River under the Antioch bridge to the easternmost tip of West Island. We waited for a tug boat pushing a barge upriver to pass before we crossed the shipping channel and found the entrance to Donlon Island. There is more than one entrance to the submerged island via the San Joaquin River but we chose the closest to the bridge. After entering you can choose your water trail. We veered right and were able to paddle most of the inner island without having to turn back. We had at least a 2 ft. tide and we encountered a couple of spots that were very shallow, probably impassable with less than a 2 foot tide. 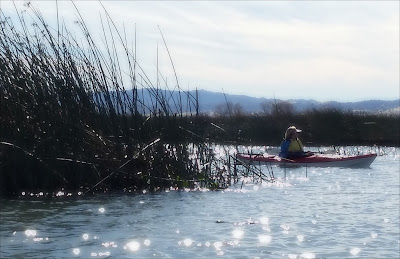 I was struck by the lack of water hyacinth and lack of migrating waterfowl. I'm happy about the hyacinth because there are many  places on the Delta that are unboatable due to hyacinth. Usually by this time of year I'll be spotting lots of Sandhill Cranes, snow geese and coots. There are a number of coots but I have yet to spot any cranes. We did see a few egrets and blue heron and a seal kept a watchful eye on us as we made our way back home.

After exploring Donlon, we paddled across Mayberry cut and into the edge of Sherman Lake. The currents near Mayberry can be very strong. We found a water trail within Sherman Lake that brought us back to the San Joaquin where we finally caught a glimpse of an otter. We crossed the shipping channel once again to West Island where we found a nice sandy beach to stretch our legs.

By the time we got back in our boats the breeze had died and we were left with glass like conditions for our journey back to the put in. It was another amazing day on the Delta!

Posted by Kathy Bunton at 4:39 PM No comments: