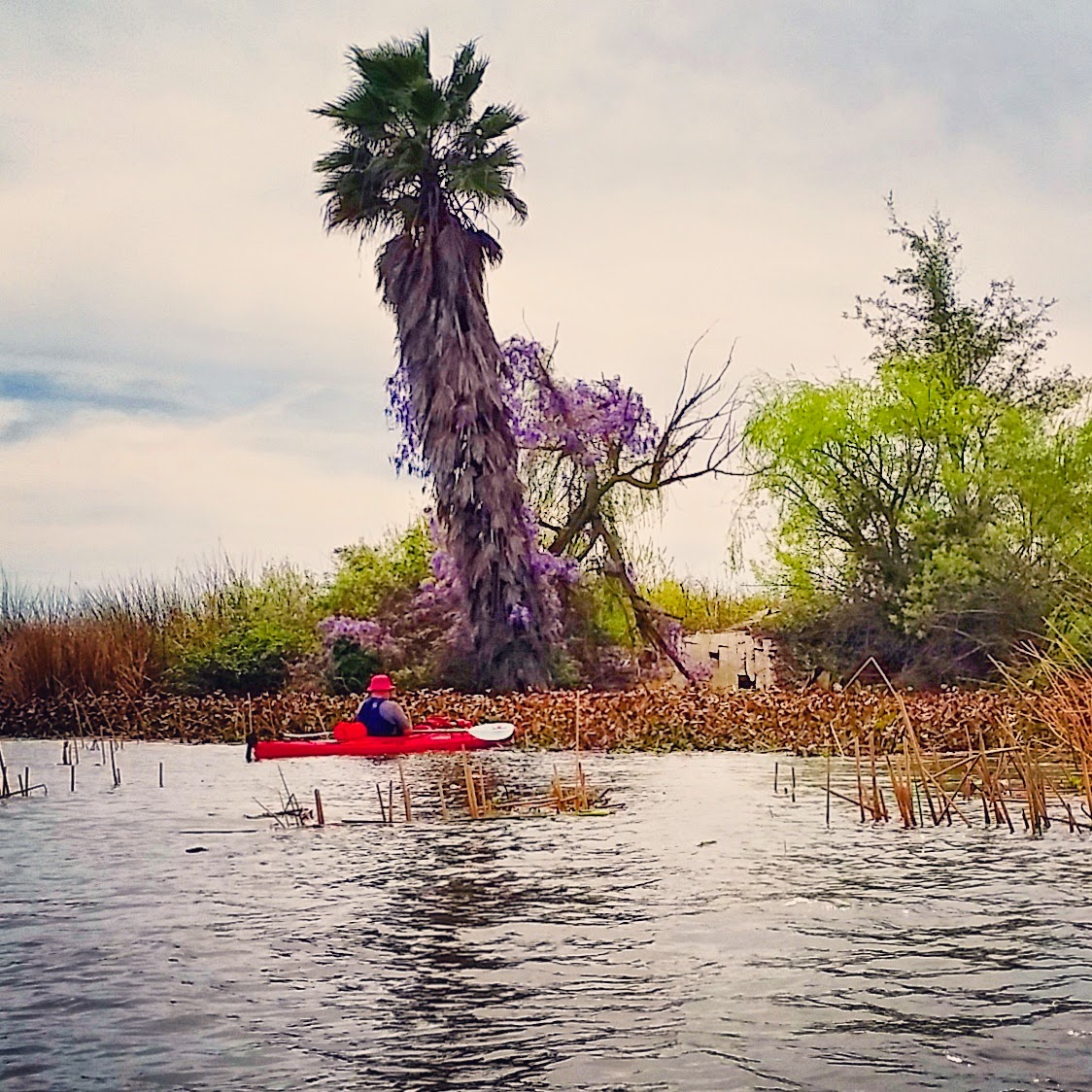 The past couple of weeks have flown by and it's hard for me to believe Spring has sprung. We've taken advantage of the warm weather and have been paddling our hearts out. 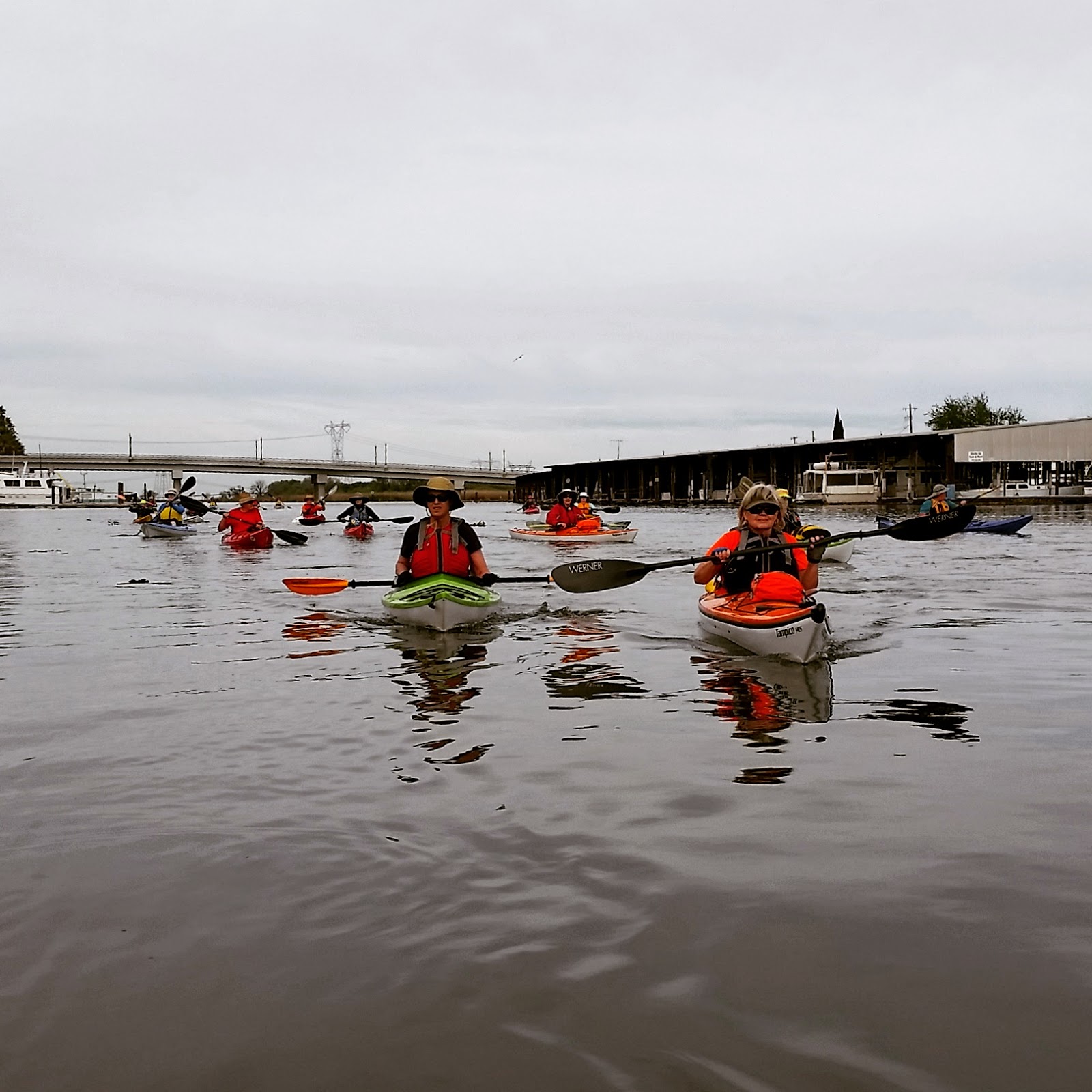 A couple of weeks ago I was privileged to guide 31 paddlers, most of whom belong to the Sacramento Paddle Pushers, to Franks Tract, Old River and Sandmound Slough. It was an awesome sight to see so many kayaks and one canoe on the water exploring Bethel Island! We started out with flat water but when we reached Franks Tract the wind had picked up and we encountered some good chop which livened things up a bit. We had several yachts pass us by giving a chance to surf for those that dared. We spent several hours exploring and everyone had a great time.

The kids have been on spring break so we spent time kayak fishing and picnicking on sandy Delta islands enjoying some family time. 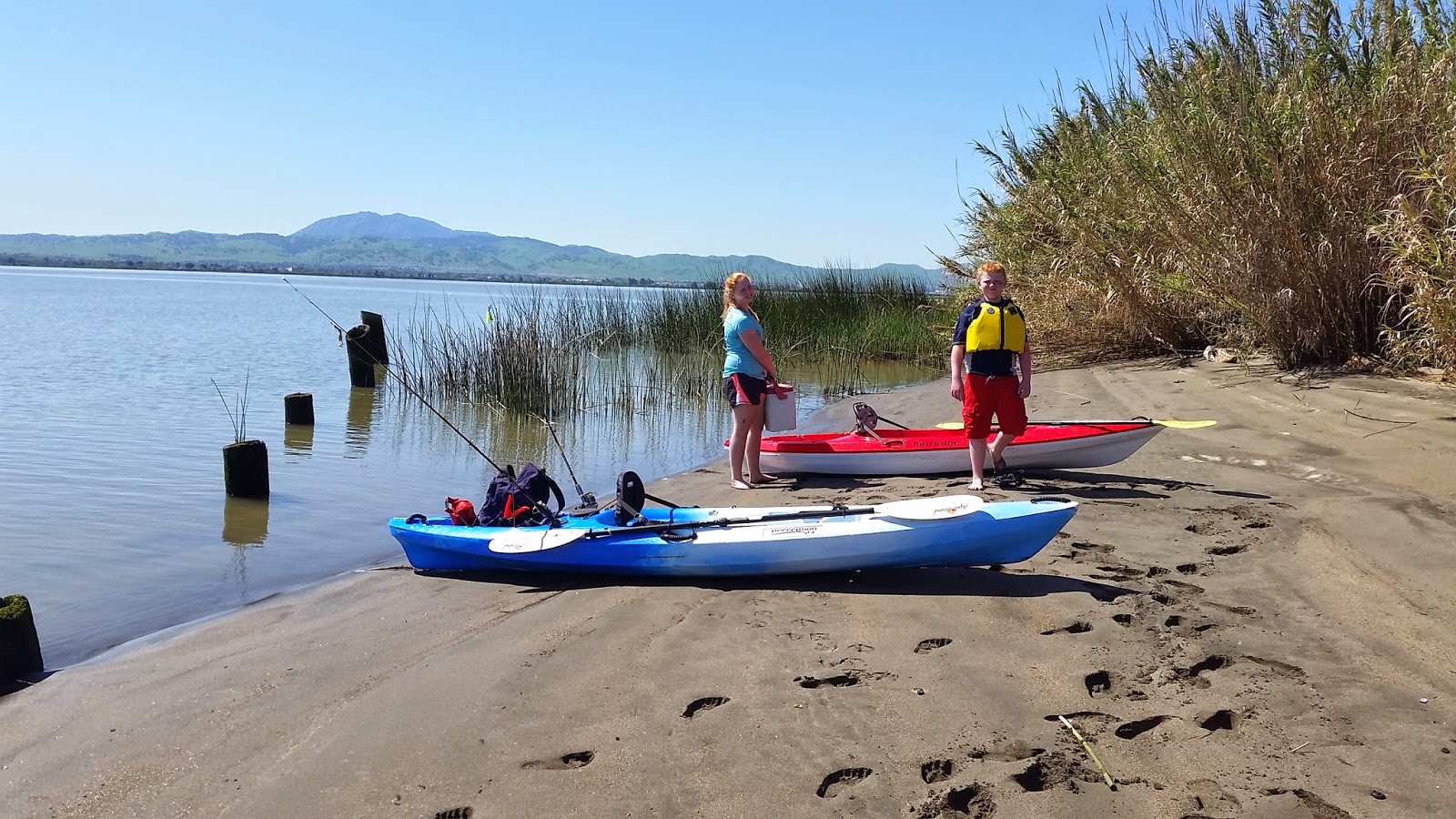 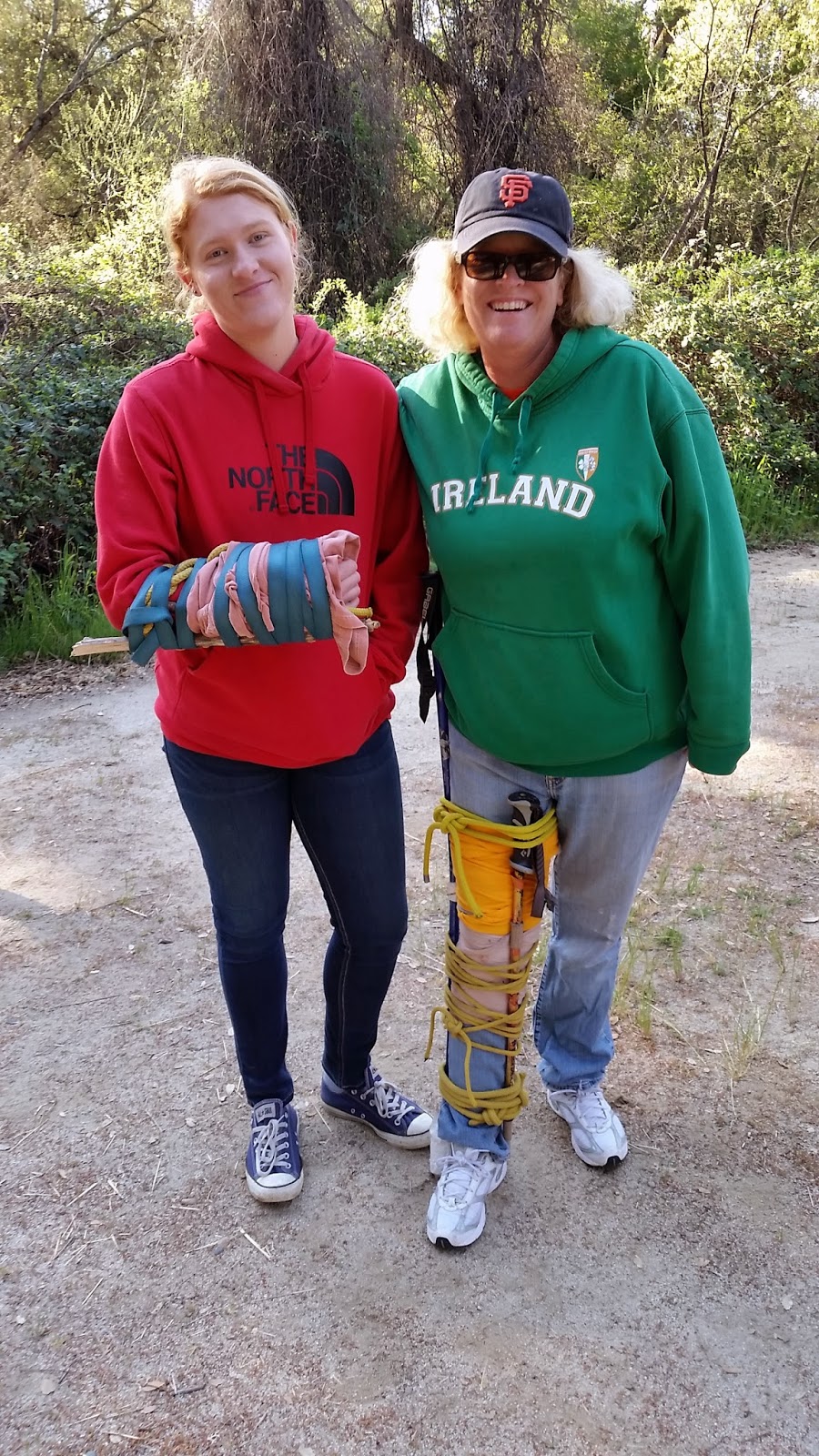 This past weekend my oldest daughter and I participated in Sierra Rescues' 16 hour Wilderness First Aid and CPR course in Coloma. We are now certified in WFA and CPR. If you are interested in taking one of their courses, I strongly encourage you to check out what they have to offer. Our instructor, Jess, made the class a fun learning experience and we'll definitely return when we need to re-certify.

Be sure and check our calendar as we have some great tours coming up including our Moonlight Paddle on the Delta April 4th. We rescheduled our special Elkhorn Slough tour for May 9th which is a must do paddle if you enjoy lots of wildlife. We also have rentals available with advance notice and we'll even help plan your paddle and drop the boats and gear off for you! 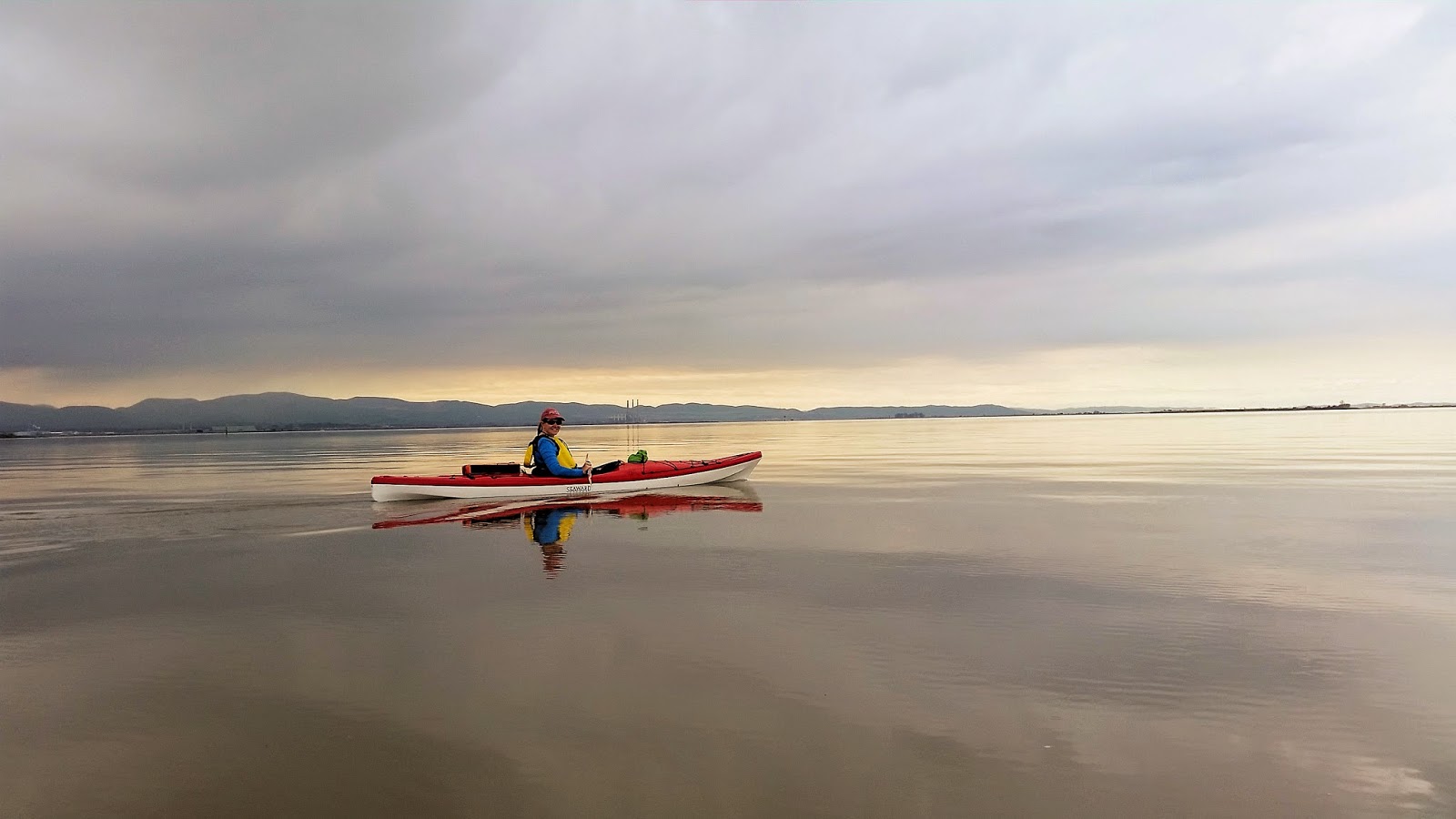 Our third attempt to reach Collinsville was a success! It was an absolutely amazing day to be on the water. 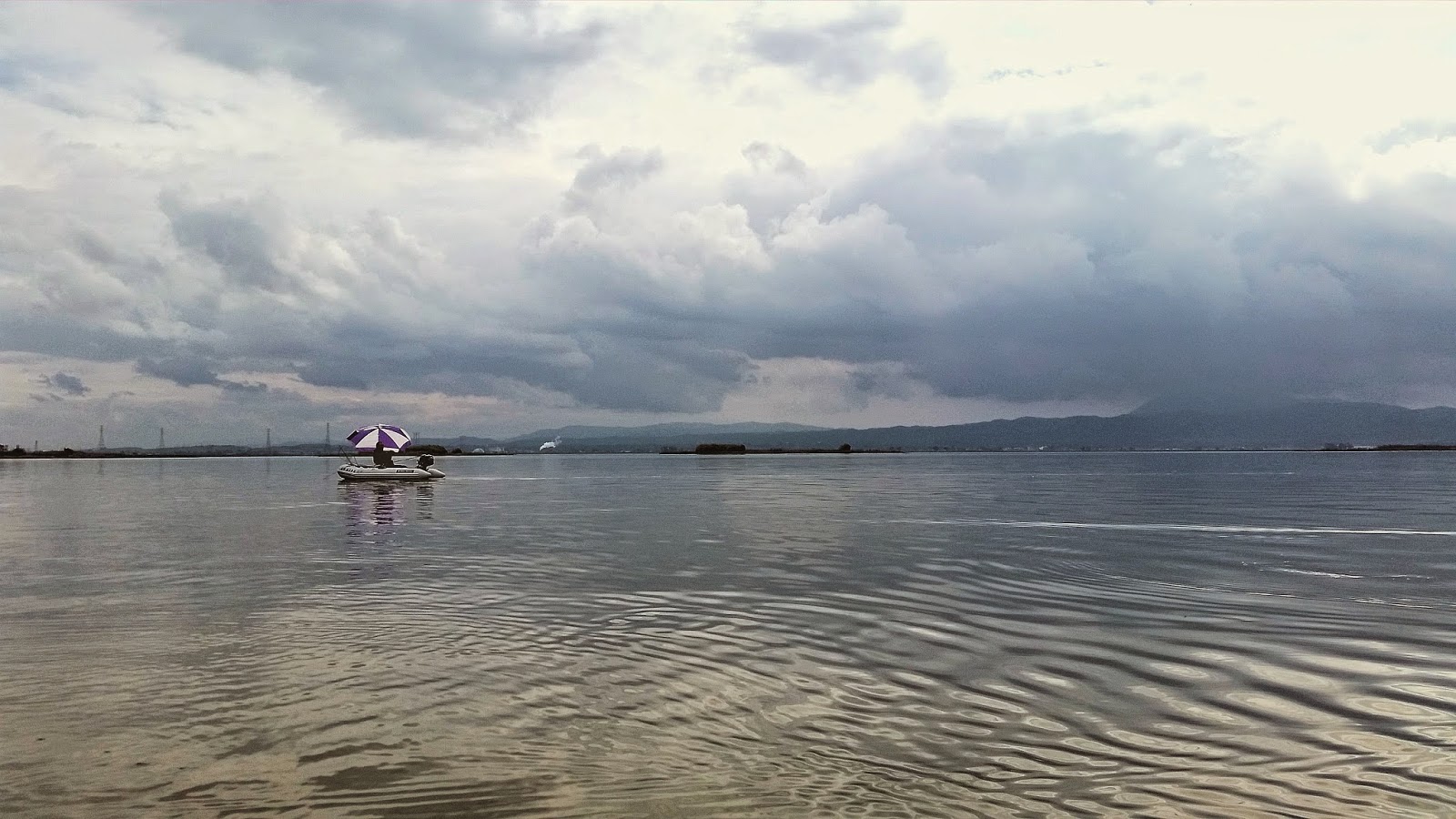 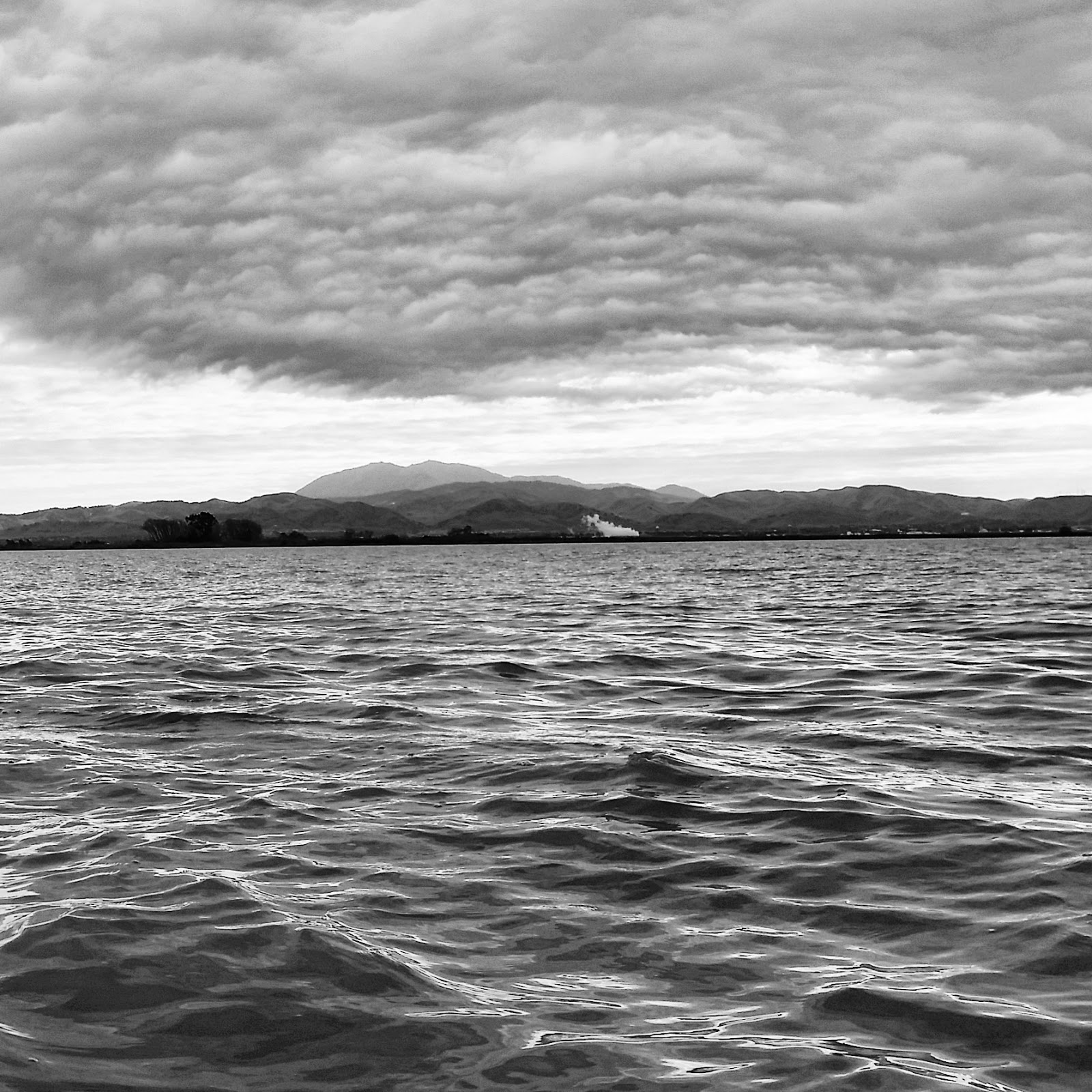 We launched from Sherman Island County park at 2:30 and paddled with the outgoing tide on glassy waters. There were showers earlier in the morning and the sky was filled with beautifully textured clouds. The sun peeked through the clouds once in awhile lighting up the windmills dotting the deep green hills. As we paddled closer to Montezuma Island, a stiff breeze came up against us and the waters became quite choppy very quickly. We attempted to pass through Montezuma Slough on the north side of the island but decided to turn around due to the low tide and hyacinth. I'm not sure if that part of the slough is navigable, maybe at a higher tide. Montezuma Island has quite a few sandy beaches covered with driftwood that make for a good lunch or stretch stop. As we left the island behind us we could see Collinsville about 500 yards away. The tide had changed and we now paddled against the current and a headwind but we were determined and after some effort we made it to our destination. The shore-front was lined with very tall pilings and high docks that reminded me of a commercial fishing port. We saw a few buildings but no people as we searched the shoreline. 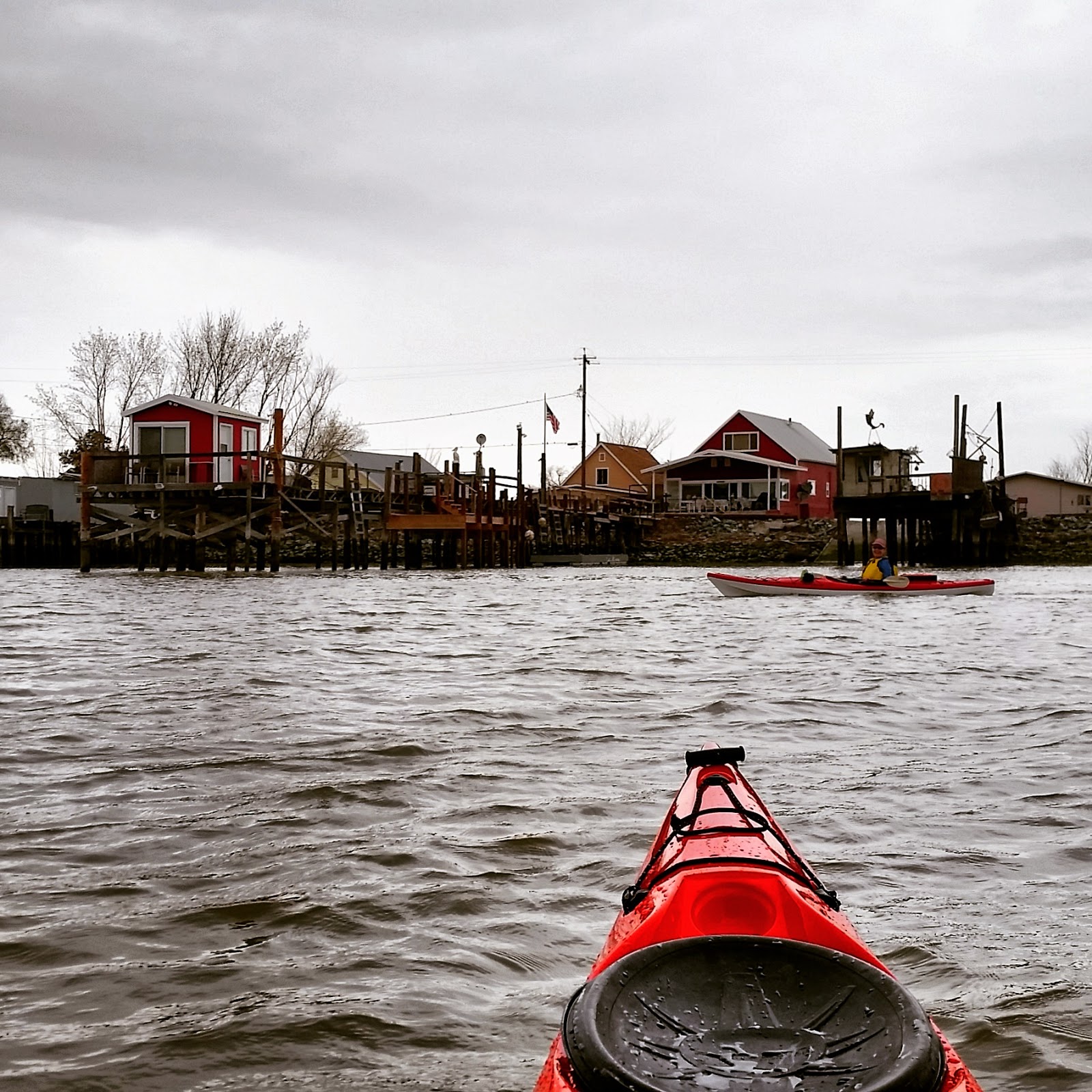 According to Hal Schell's Guide to Cruising the California Delta, the sleepy town of "Collinsville was named after C.J. Collins, who settled in the area in 1859 and surveyed for the town in 1861. Collinsville had even earlier beginings. Between 1846 and 1849 L.W. Hastings ran a ferry from the Collinsville area to Contra Costa and it is thought to have been the first ferry on either the Sacramento or San Joaquin Rivers." At one time Collinsville was home to nearly 500 people and "was a regular port of call for steamboats, a thriving fishing village where Italian was heard everywhere. It had at least two fish canneries, hotels, saloons and other businesses."

There is so much history among the delta just waiting to be revisited. As I paddle along sandy shores and tule covered islands, I imagine what it must have looked like 200 years ago. I don't think too much has changed when it comes to Collinsville. 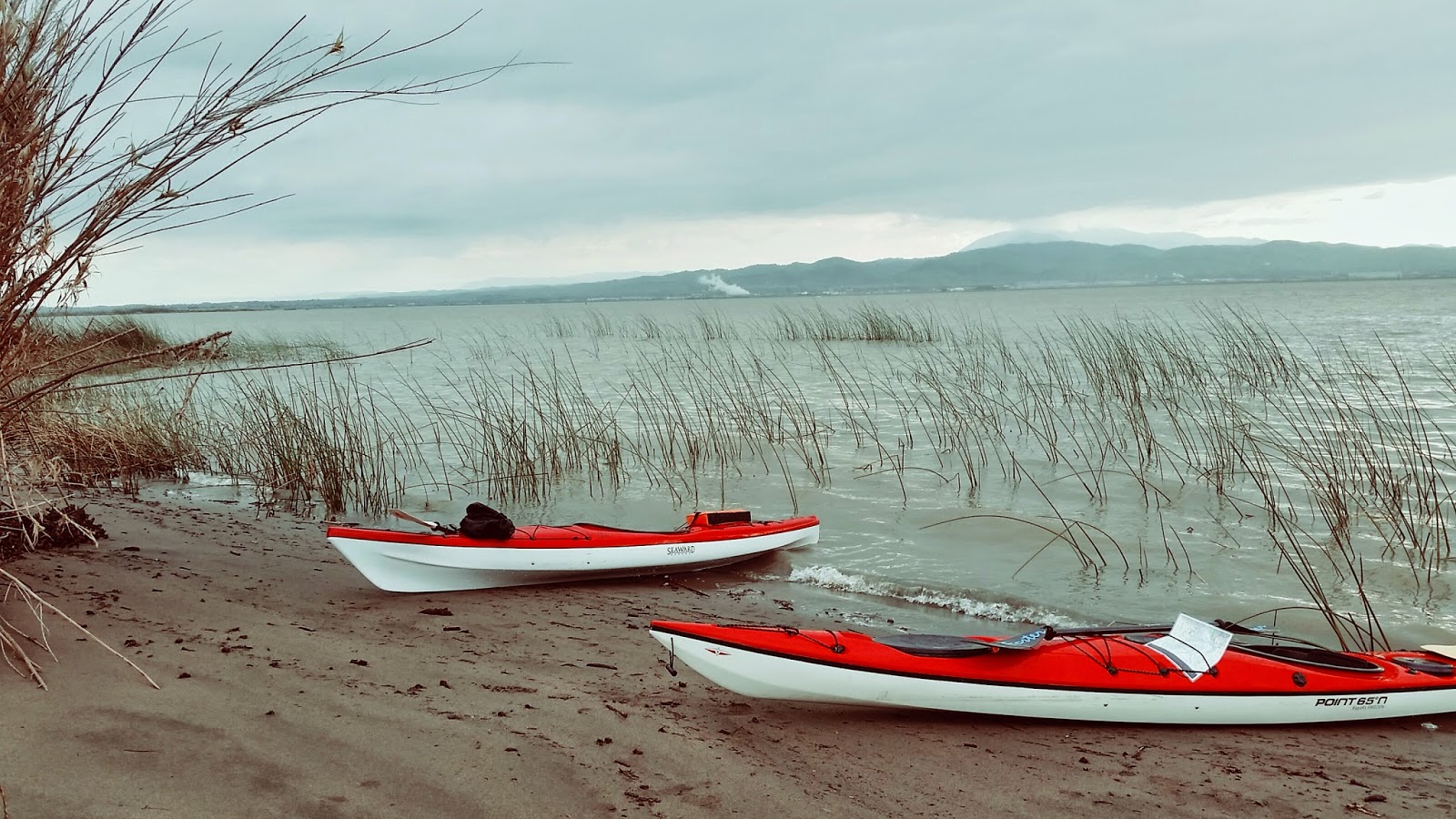 After a few pictures we turned around with the wind at our backs and headed to Montezuma Island for a snack and stretch break. It was nice to relax on the sandy, driftwood covered beach. After our little break on the beach we launched back onto the Sacramento River and headed back to the put in. The wind had died down but there were some nice surfable waves that helped move us along at a good clip.

It was a very relaxing day on the delta. Next time I plan on paddling a little further up Montezuma Slough along Van Sickle Island. The Delta offers an endless supply of paddling opportunities where sights and sounds change every time you hit the water.

Posted by Kathy Bunton at 10:00 PM No comments: 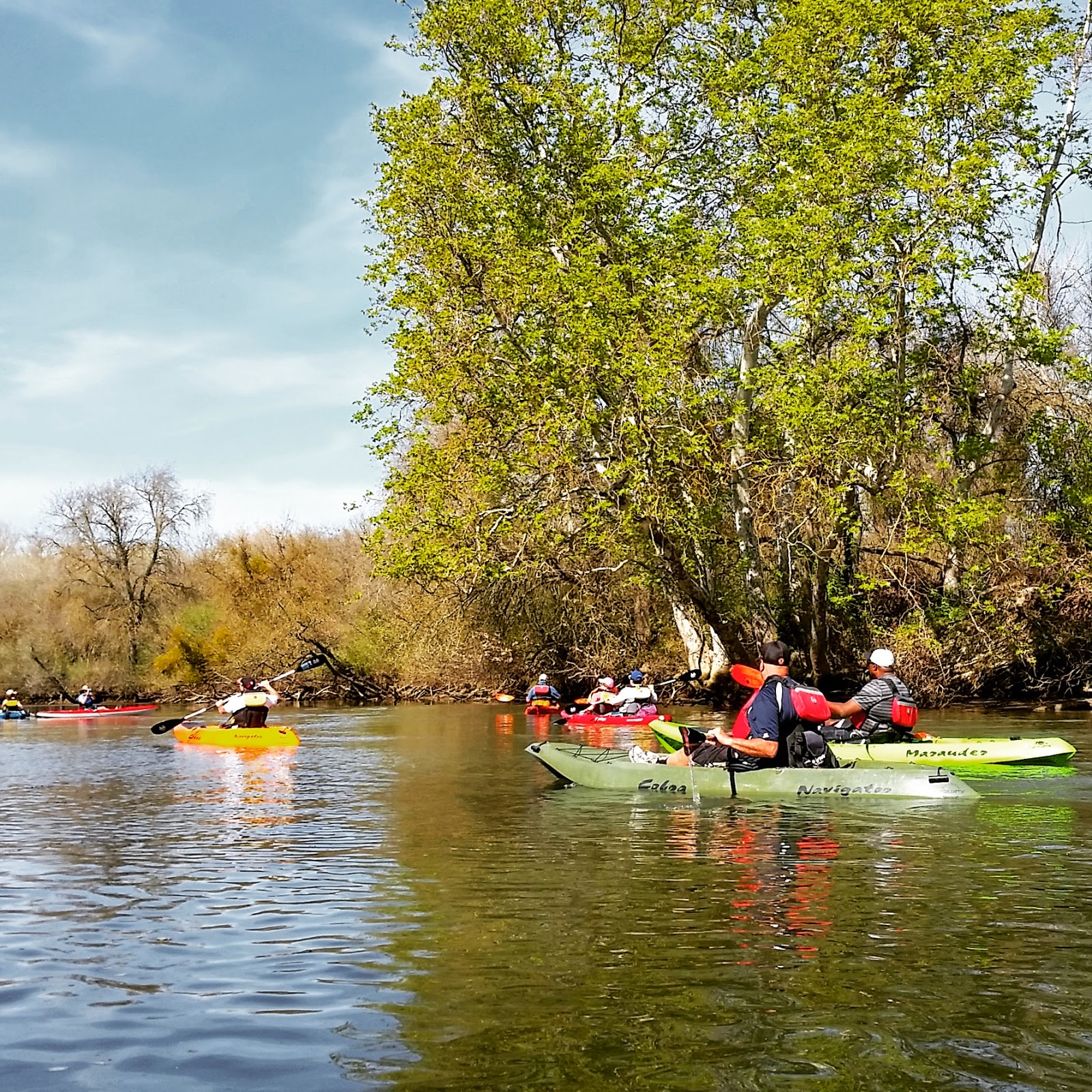 We had a great trip down the Mokelumne River yesterday for Wimpy's Run! After figuring out the shuttle, we finally got on the water just before 2:00 pm and rode the outgoing tide to Wimpy's Marina. 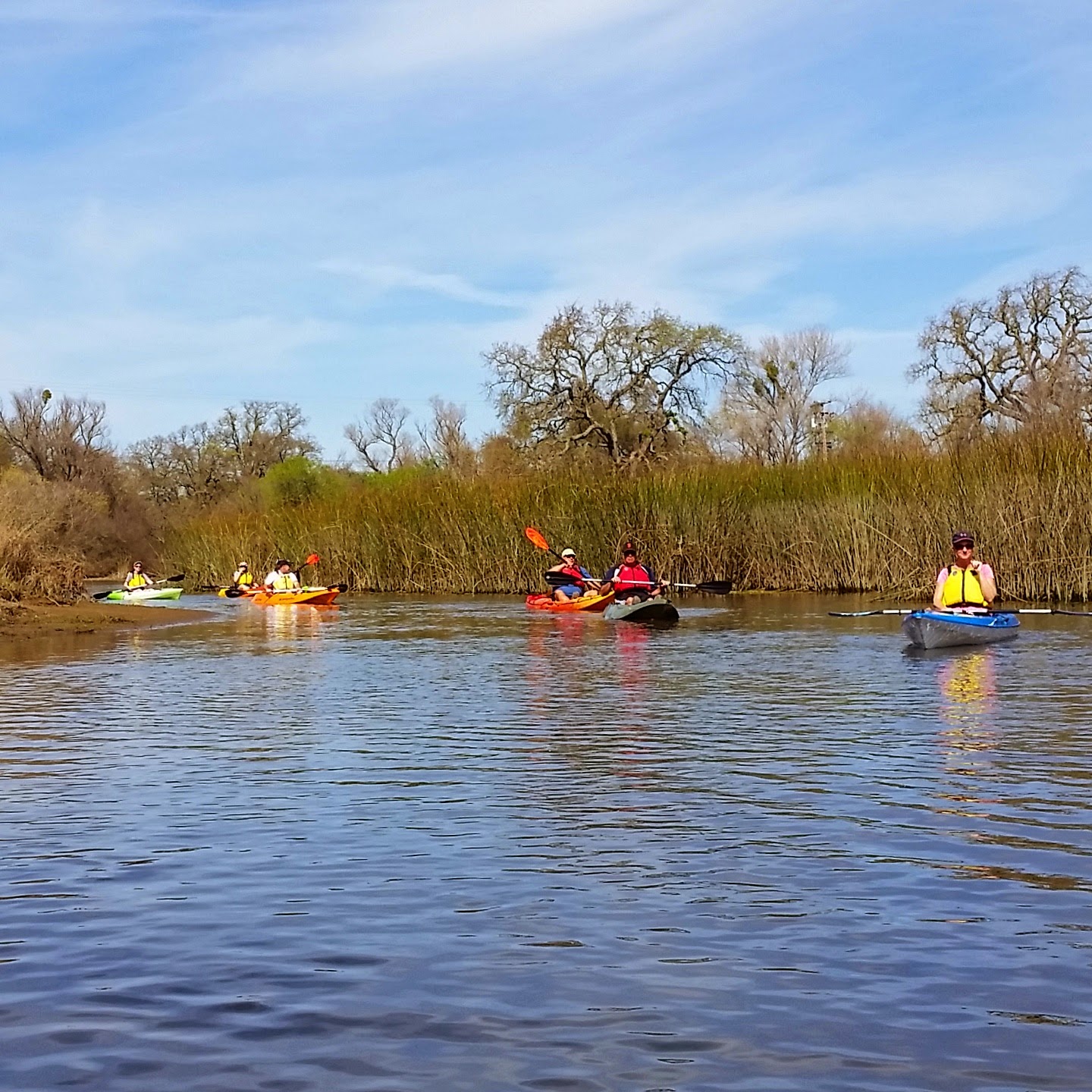 The weather couldn't have been better as we launched from the Cosumnes River Preserve. The wildlife must have been in hiding because we didn't see much other than some turtles and a Great Blue Heron. I threw my fishing line behind me and trolled down the river but never got a bite. The lack of wildlife didn't spoil the day because just being on the water surrounded by lovely scenery was enough.

We traveled just over 5 miles and made it to Wimpy's in time for an early dinner. The food was delicious and the company even better and I can't wait to do it again!


Posted by Kathy Bunton at 3:50 PM No comments: