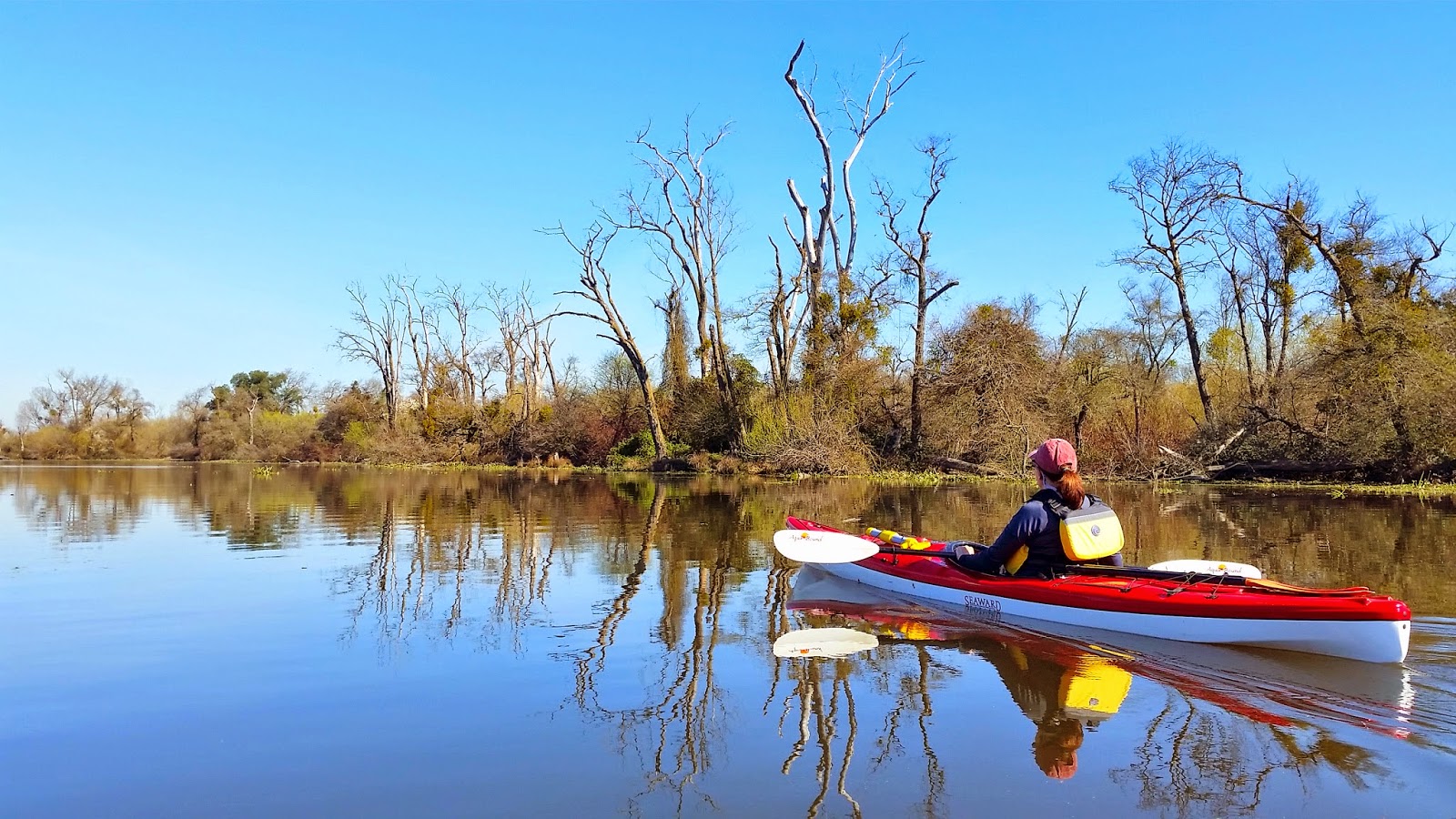 We paddled until we could paddle no more. It was a stunning day on the Delta for our "Wednesday Wandering." 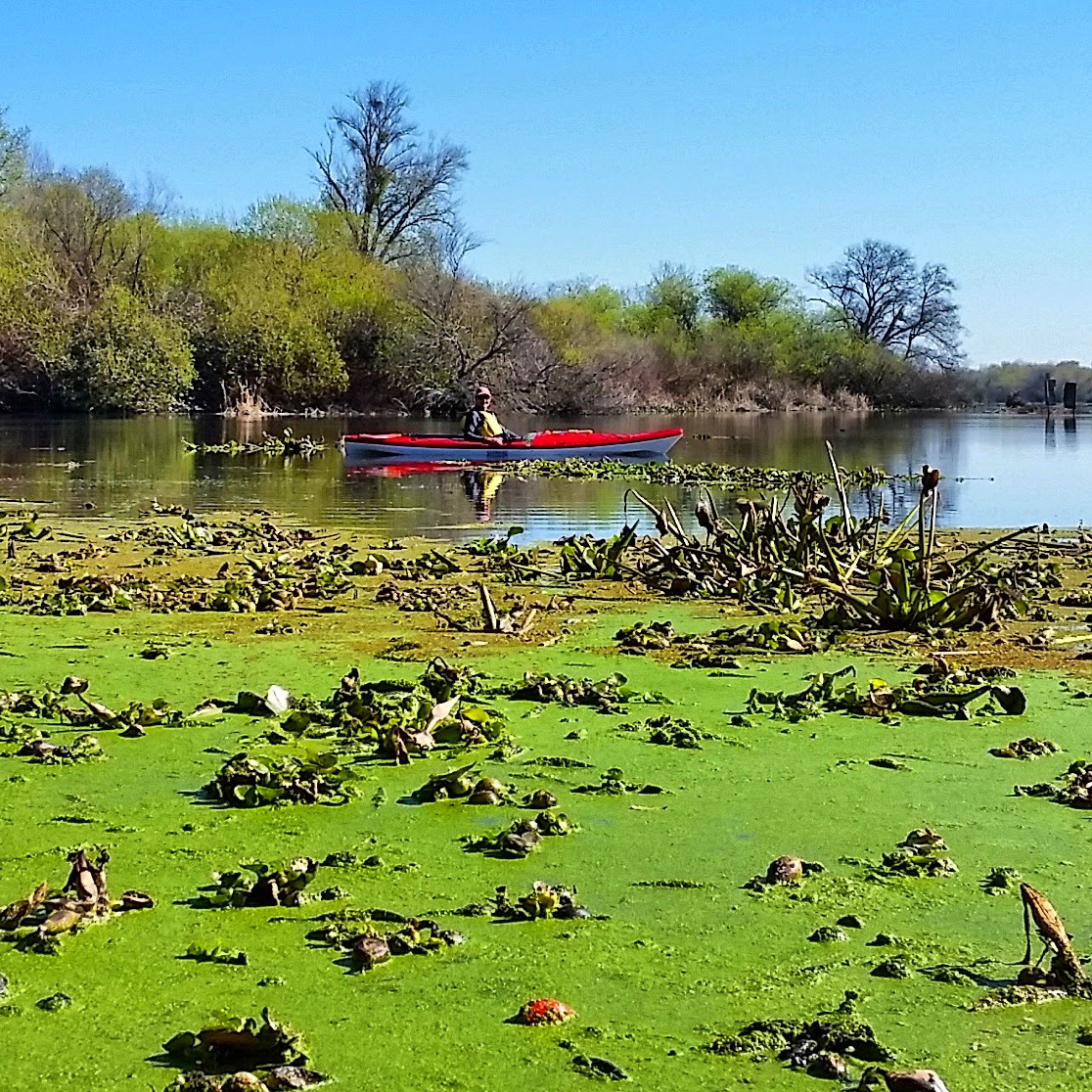 We launched from Delta Meadows in Locke at 10:25 am with high tide predicted for 11:49 am at New Hope. The small boat ramp was surrounded by some tiny green plant life floating on the surface but it was easy enough to paddle through. There wasn't much hyacinth which was my main concern because it can make launching or landing impossible. The sun was shining brightly and there was no breeze to speak of as we paddled north on Snodgrass Slough. 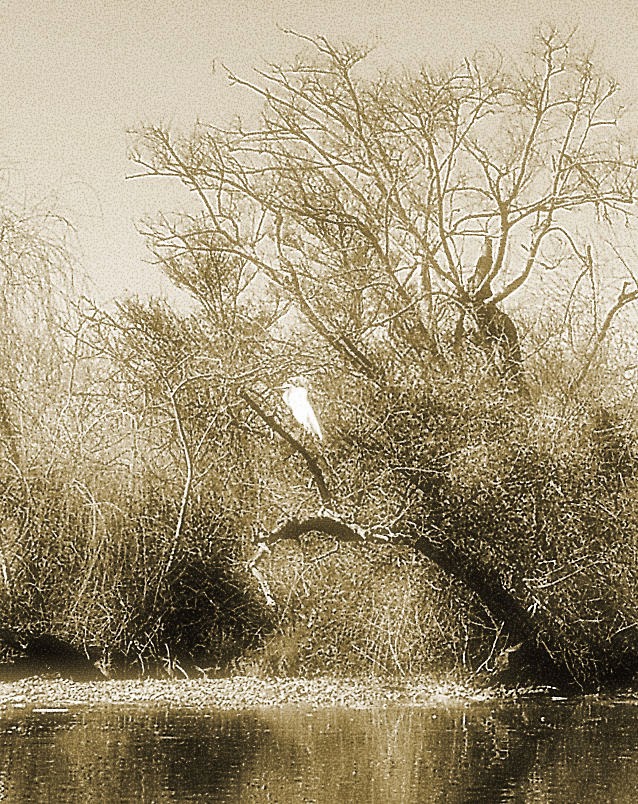 Our plan was to see how far up the slough we could get and see if we could reach Stone Lakes. We paddled with purpose as a sea lion surfaced behind and then passed below us. We continued to follow him most of the trip up the slough. The sounds of Sandhill Cranes soon filled the air and as we looked above we saw a flock of at least two dozen pass overhead. A Red Tail Hawk circled above the glassy water and Cormorants spread their wings to dry as they rested on bare branches. Greater and Lesser Egrets, Night Heron and a Great Blue Heron  also blessed us with their presence. Turtles leaped off half submerged logs as we paddled quietly past them and hundreds of coots accompanied our journey. The day was filled with almost magical encounters with God's precious creatures. 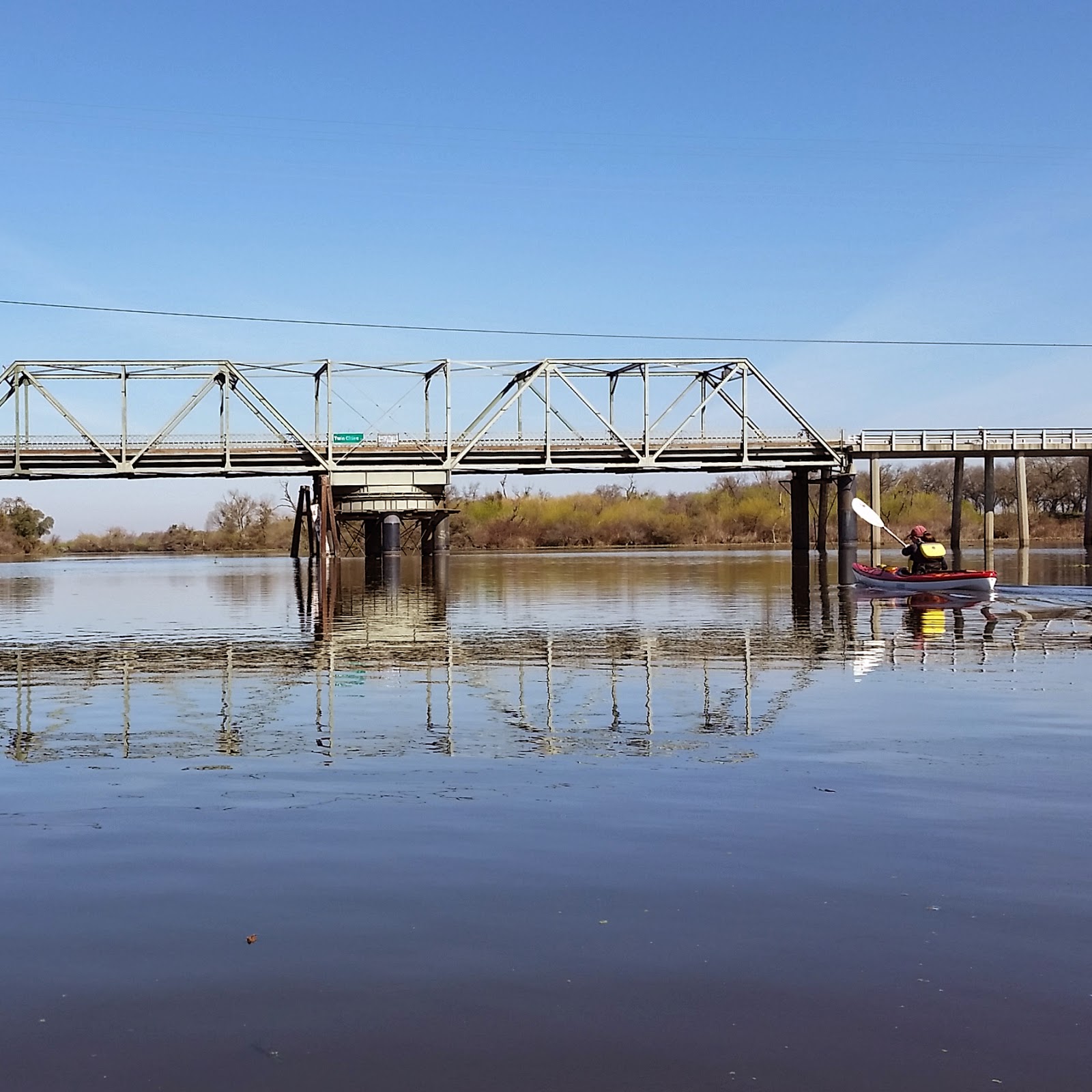 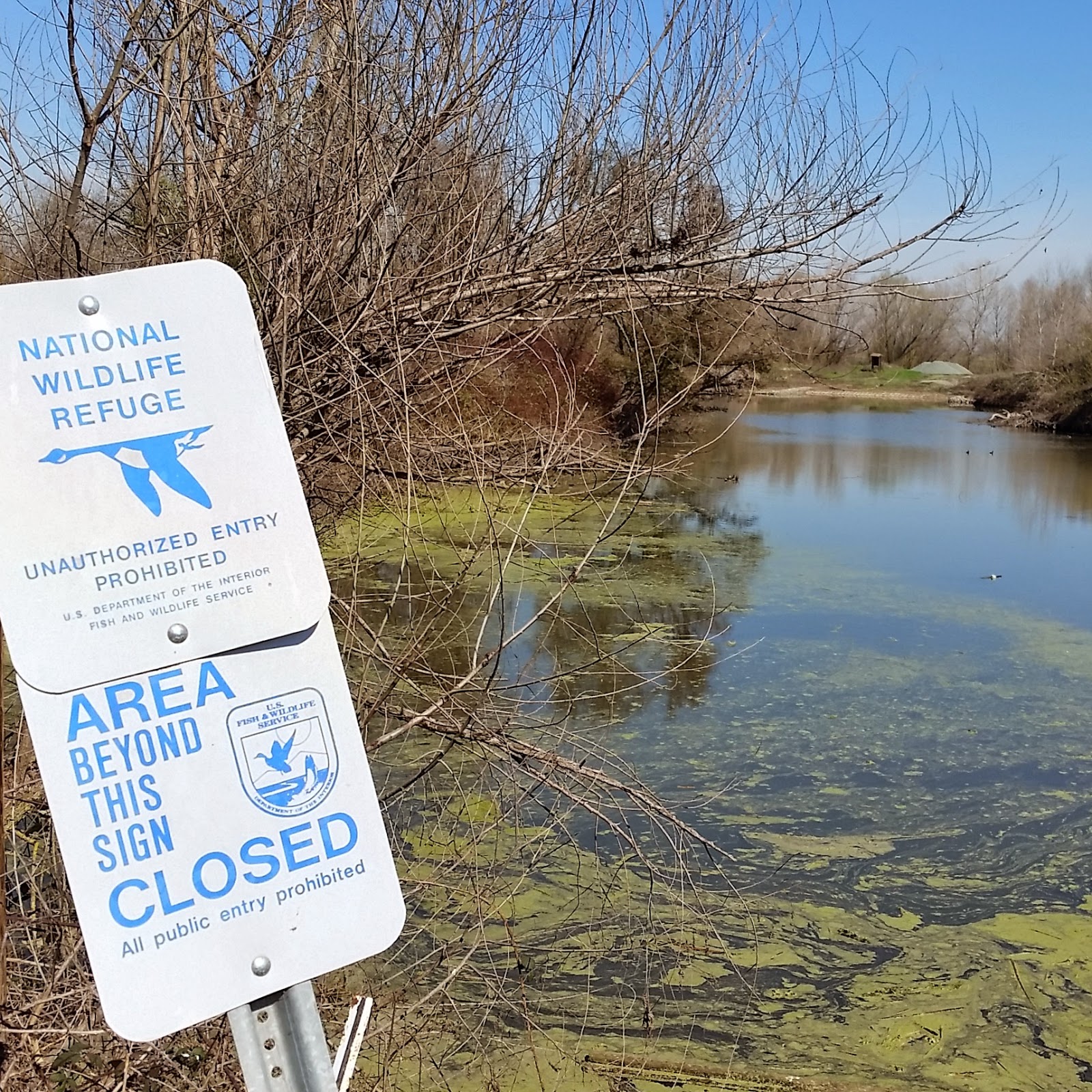 We entered the heart of Snodgrass Slough after passing under the Twin Cities bridge. The levies were lined with varying types of trees and brush. Tule also hugged the edges of the levee and blackberry bushes abounded. The waterway itself widened and it felt like we were on a small lake. The slough is surrounded by farmland and we came upon a couple of places that looked as if they could be parks but in actuality were private property with signs posted no trespassing. We paddled on and the slough became narrower with each progressive stroke. Tree branches hung over the water and small side channels appeared like private rooms beckoning to be explored. After paddling a little over 6 miles we finally reached a dam and could go no further. We exited our boats and climbed a steep hill to see what was on the other side of the dam. We had made it to the edge of Stone Lakes. 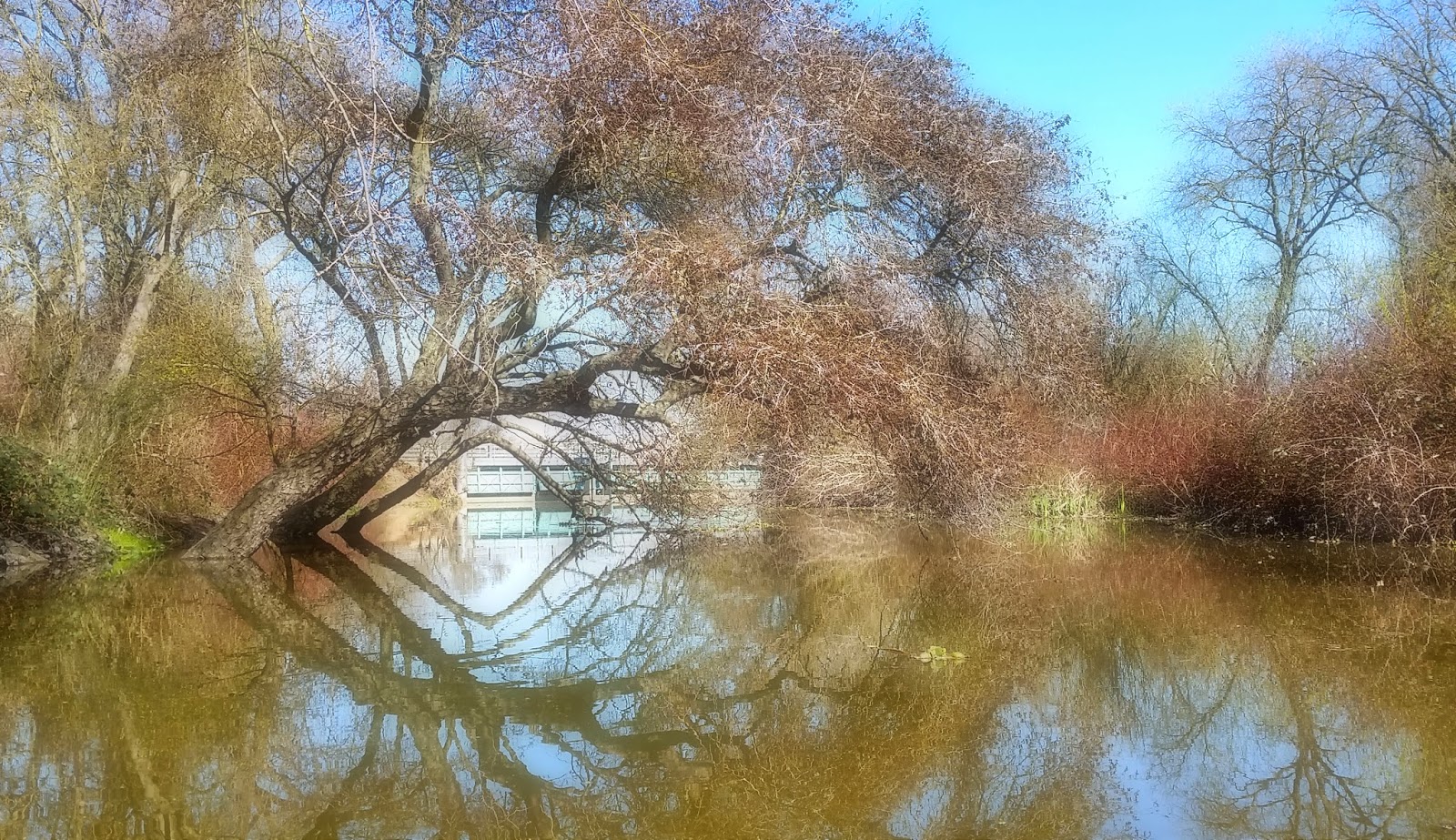 We returned to our boats and headed back to a spot we felt would make a good lunch spot under the shade of some trees. After refueling we paddled with the current back to the put in. We met our sea lion friend halfway back and it looked like he found a good fishing spot so he was too busy filling his tummy to take notice of us. We almost missed the channel that would take us back to Delta Meadows which reminded me to be sure and take note of landmarks when paddling this area. It's easy to get lost in this beautiful mesmerizing stretch of the Delta. 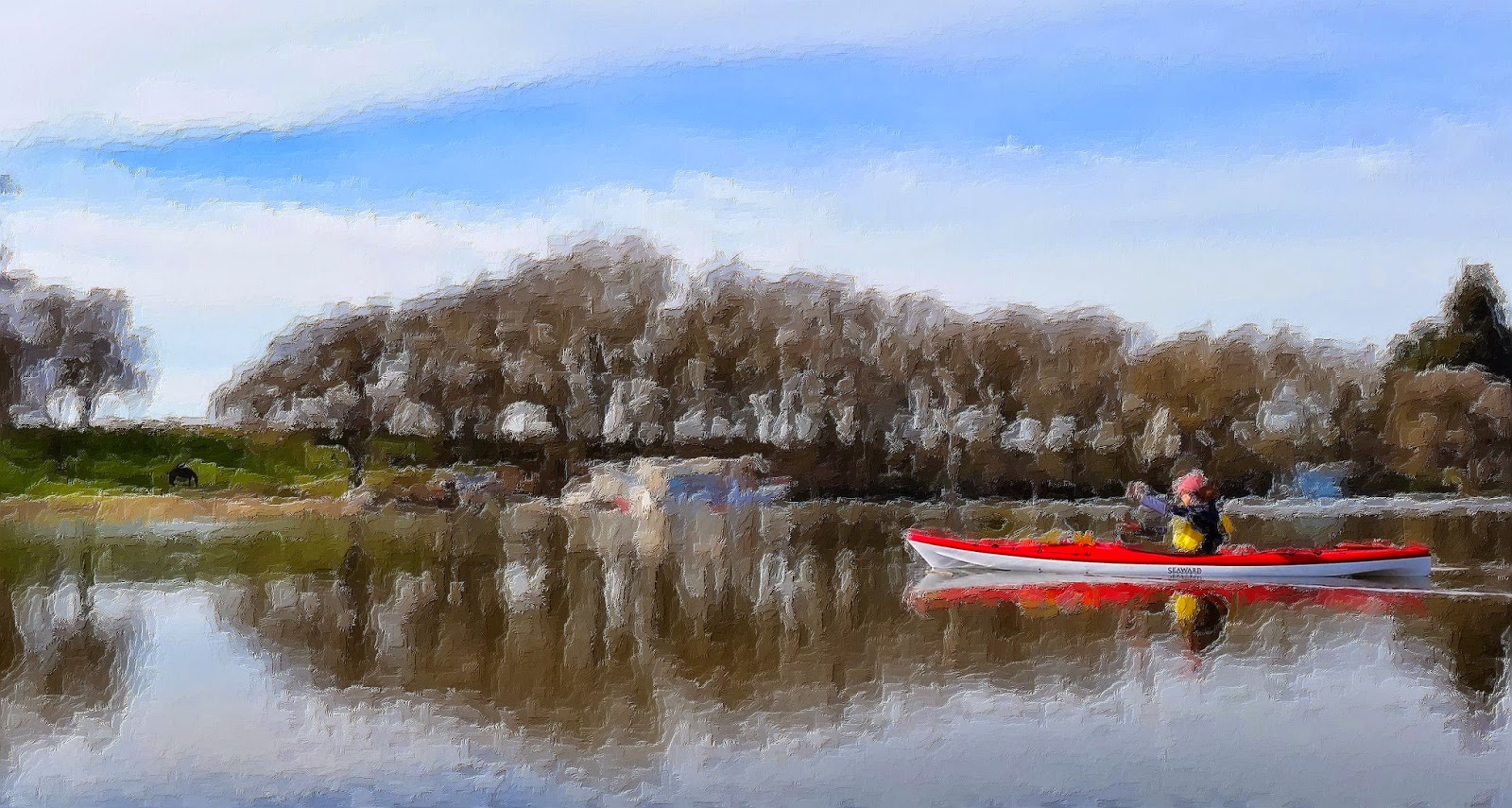 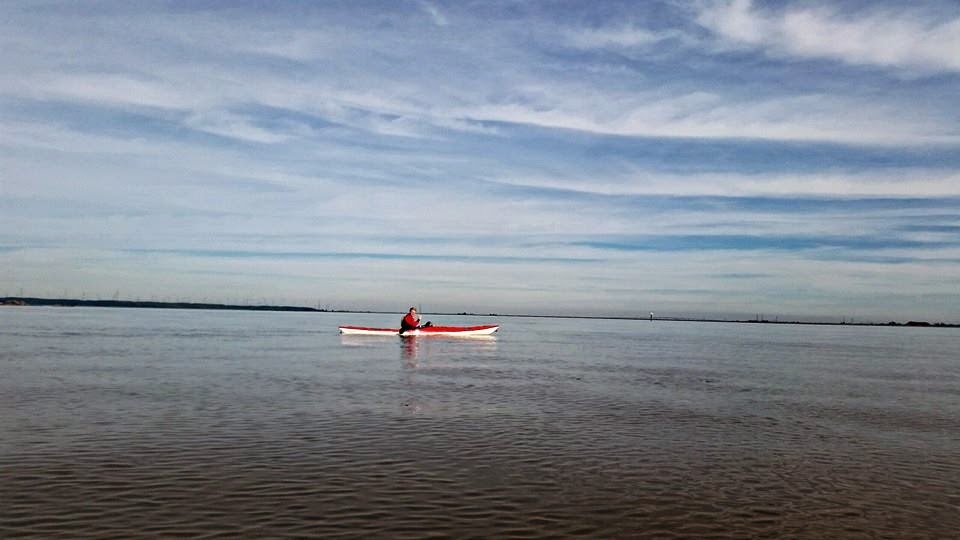 Wednesday my Son and I made a quick jaunt to Chipps Island. I had planned on a much more in depth exploration but I'll be putting that on my calendar for another day. The weather has been incredible and it was great to get out on the water even for a couple hours.

Chipps Island lies a little over a half mile northeast of Pittsburg and is bordered by the confluence of the Sacramento and San Joaquin River to its' south and Honker Bay to the west. We launched from the Pittsburg Marina at 1:40 pm with low tide predicted for 2:45. The current was predicted to flow at just over one knot. The water had a few ripples with barely a breeze blowing from the southwest. 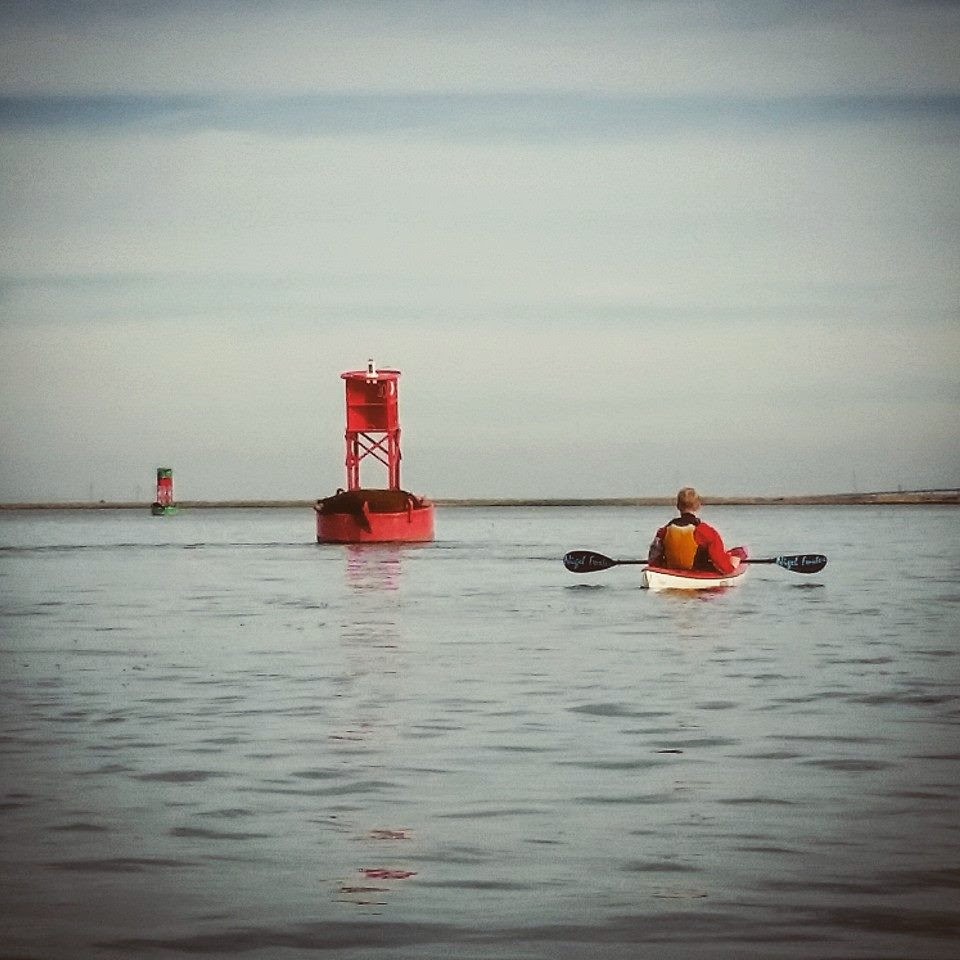 Once out of the protection of the marina we picked up speed rather quickly with the current pushing us along at a good clip. I had planned on paddling to Mallard Island before making the crossing but with the water moving faster than I expected I decided to cross when we reached the Power Plant. The crossing was just over a half mile but it turned out to be one that required our full attention. Before crossing we made sure the coast was clear, that there were no ships in the distance heading our way. We passed a huge sea lion resting on the red navigation buoy and proceeded quickly across the shipping channel. We encountered a huge eddy, a couple of boils and even a whirlpool forming. I must say I felt much more relaxed when we reached the shoreline of Chipps Island.

When we reached the shore of Chipps Island we discovered an opening that led to another opening to a long slough. We kept an eye open for a beach or somewhere safe to land as I was having some issues with my kayak seat and wanted to readjust it. All we found was mud so we turned around and headed east along the shore to see what we could find. We paddled to Spoonbill creek but still had not found any kind of beach. We did find a small cove with the edge covered in a thick grass like plant that my Son was able to climb and bring his boat up to rest. I decided to stay in my boat and attempt to fix my seat. We sat around for awhile waiting for the tide to change or at least slow down some so we wouldn't have to paddle against it. 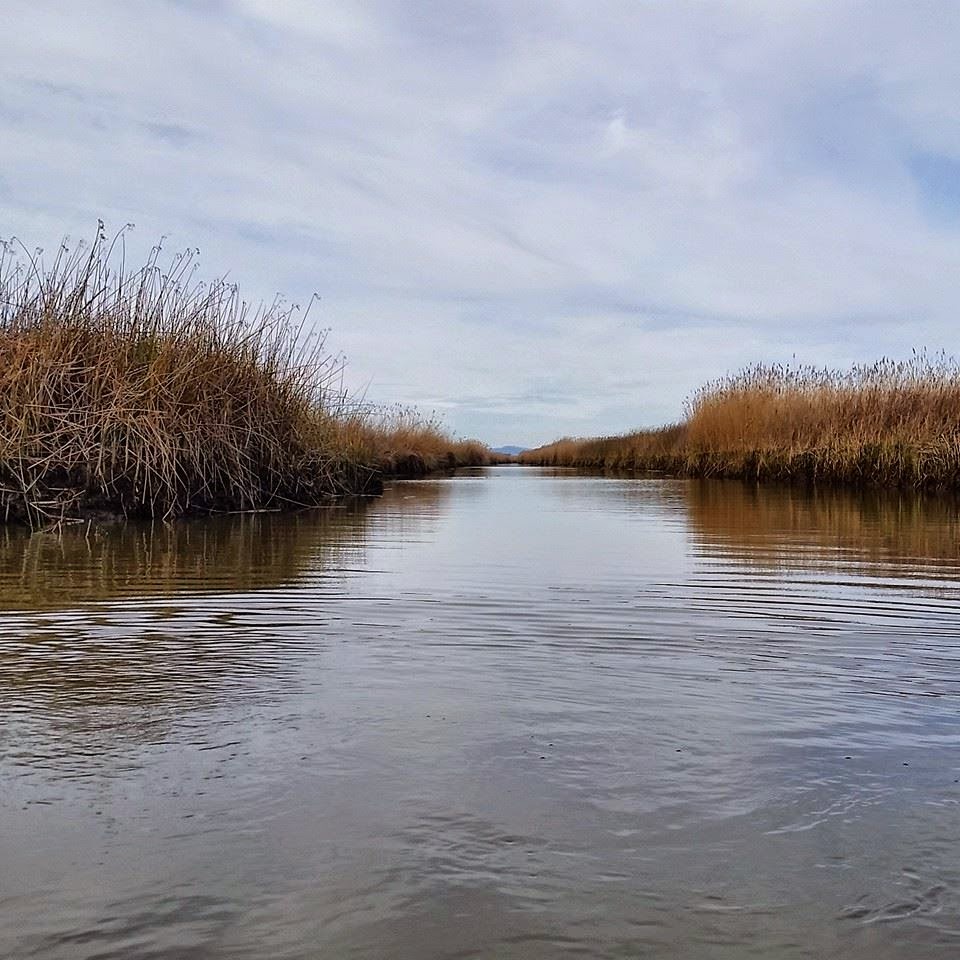 As the current subsided we paddled back to the Pittsburg marina enjoying a much calmer river on our way home. The same sea lion was still resting on the red buoy as we passed by, looking like he was enjoying his nap in the sunshine.

Chipps Island has many sloughs and inlets to explore and I look forward to returning. 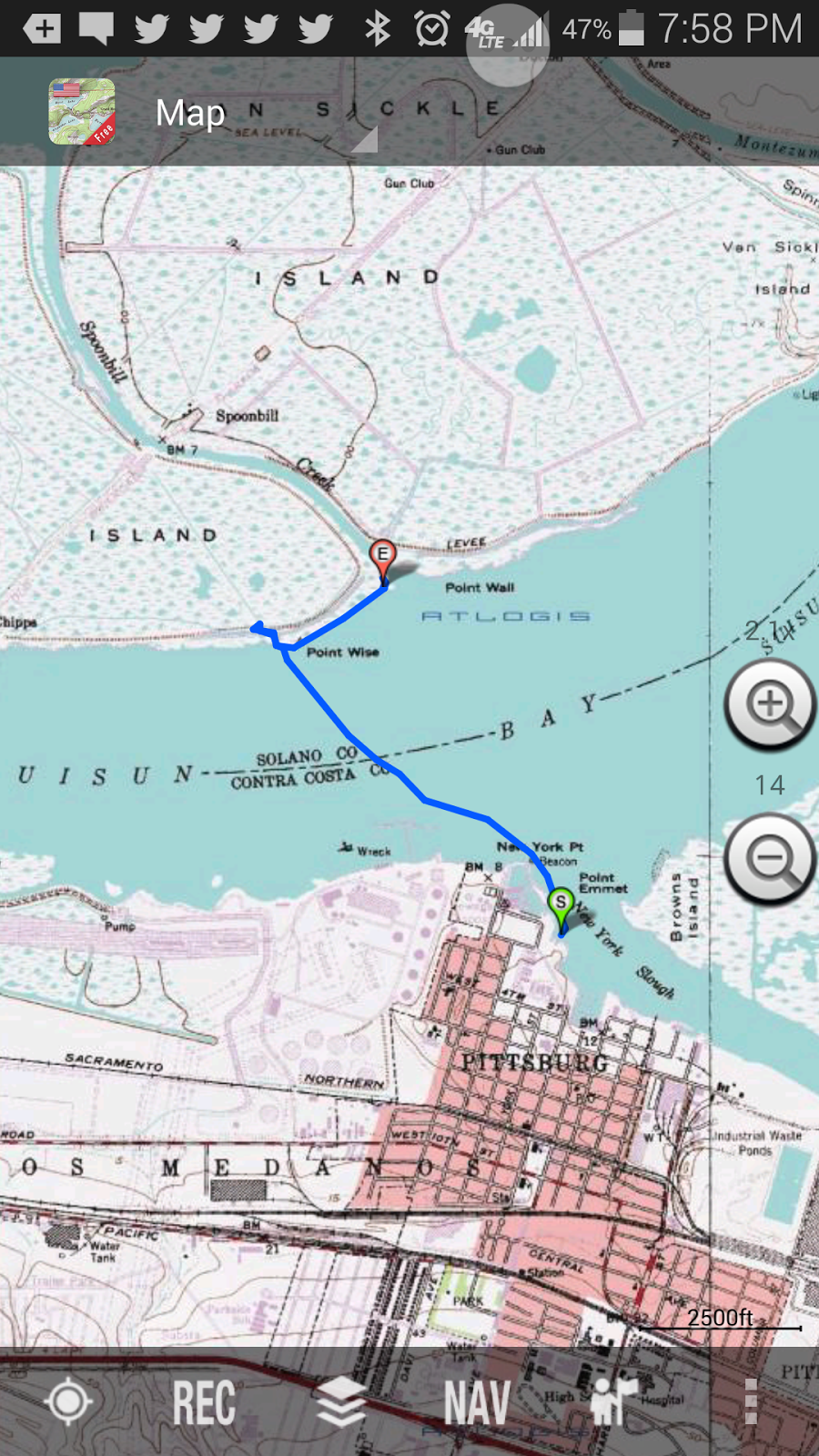 Many people think of the Delta as purely flatwater and that could be a dangerous thought to assume. Some areas of the Delta are more protected than others. Wherever there is moving water you must use caution and be prepared to deal with changing conditions. The sheer volume of water that passes through the Delta is mind boggling, then add tidal influence and wind and you can experience some extremely challenging conditions. I strongly suggest kayak instruction including self and assisted rescue techniques. Know the area you'll be paddling and check tides and weather before leaving your house.  Carry a cell phone in a waterproof case and/or a VHF radio. Dress for immersion or at the very least carry a spare set of clothes in a drybag and always leave a float plan with family or friends. The Delta is a wonderful and beautiful place to paddle but be sure to show it respect. 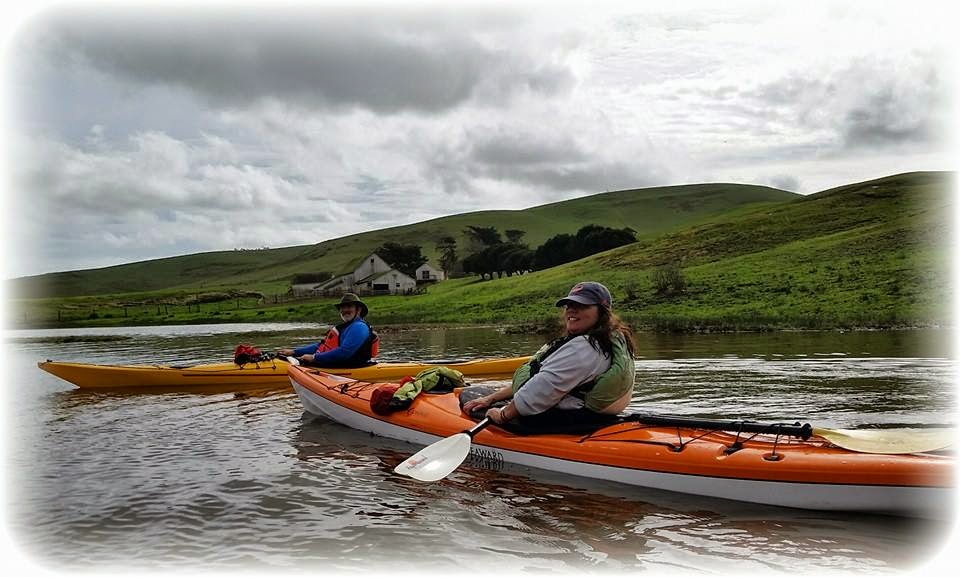 Saturday a couple of friends and I participated in the annual Cow Patty Pageant on the Estero Americano put on by Rivers for Change. Rivers for Change is a nonprofit made up of a wonderful and "passionate group of river enthusiasts dedicated to changing the way people think about and interact with water." Janice Green has a nice write up about kayaking the Estero on her website. 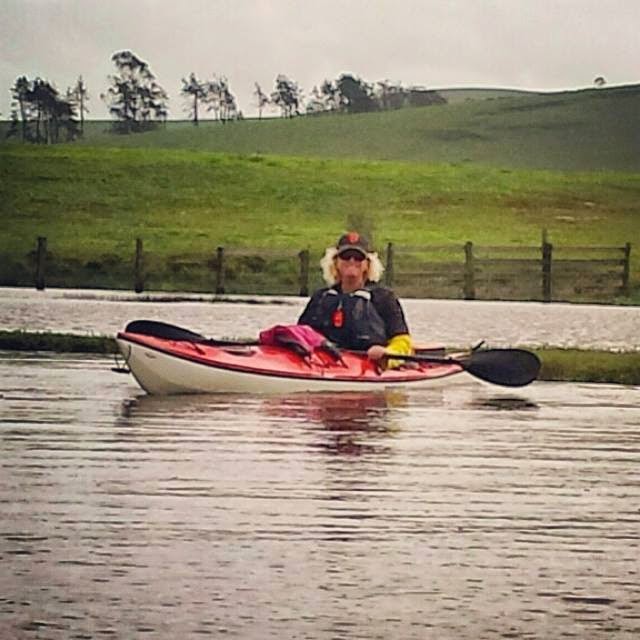 It turned out to be a beautiful day on the Estero. I wasn't sure what to expect and with all the flash flood and small craft advisories on Friday, I thought the event may be cancelled. I was delighted when we arrived in Valley Ford to see the sun shining and there was no wind to speak of. After checking in at the schoolhouse in Valley Ford, we made our way to the put-in less than a mile away. We met a bunch of happy and enthusiastic paddlers and some were dressed appropriately for the event decked out in a multitude of cattle attire. The first group to launch were the recreational paddlers doing the short course. My friends and I signed up for the intermediate course which was 11 miles round trip and the second wave to launch at approximately 9:50 am. The last wave launched 10 minutes after us and were made up of the competitive paddlers most of which were paddling surfskis. 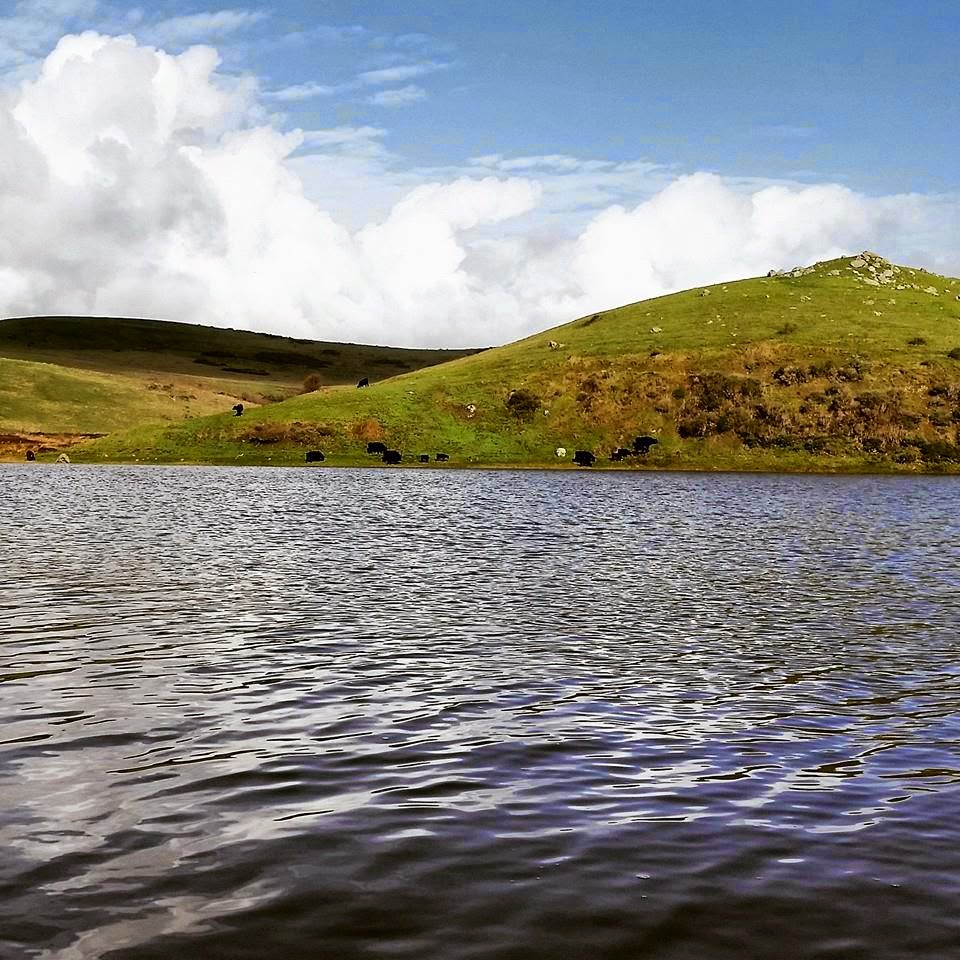 Due to the weather forecast we were told that we would need to turn around at 11 am no matter where we were on the Estero so we could be off the water before the next storm hit. We paddled our hearts out and almost made it to the ocean but came up a half mile shy of our goal. That's ok because that means we'll have to return. I didn't get to take as many pictures as I would have liked because of the pace we were trying to keep so that's another excuse to go back.

I'm proud to say that my friend and I tied for second to last place and had a moovalous time taking part in this event! 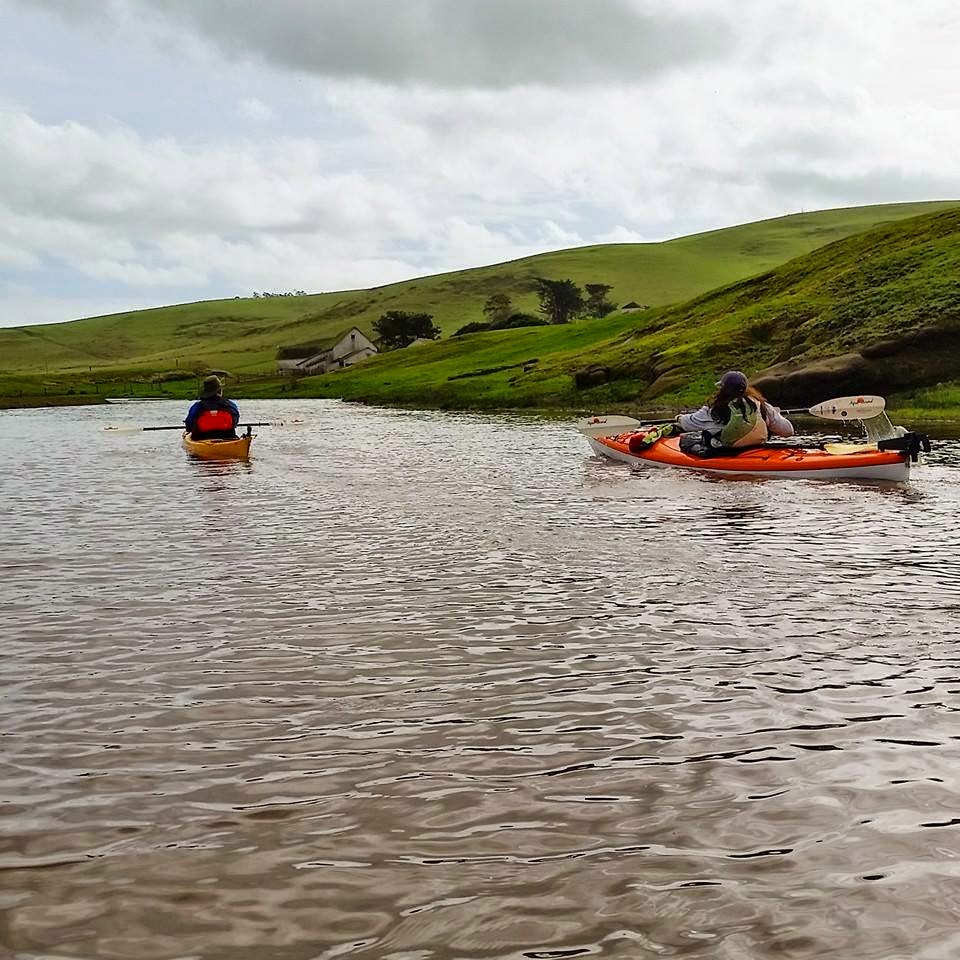 Rivers for Change also hosts the CAL 100 which takes place Memorial Day weekend. This 100 mile race is also on my bucket list!
Posted by Kathy Bunton at 9:23 PM No comments: