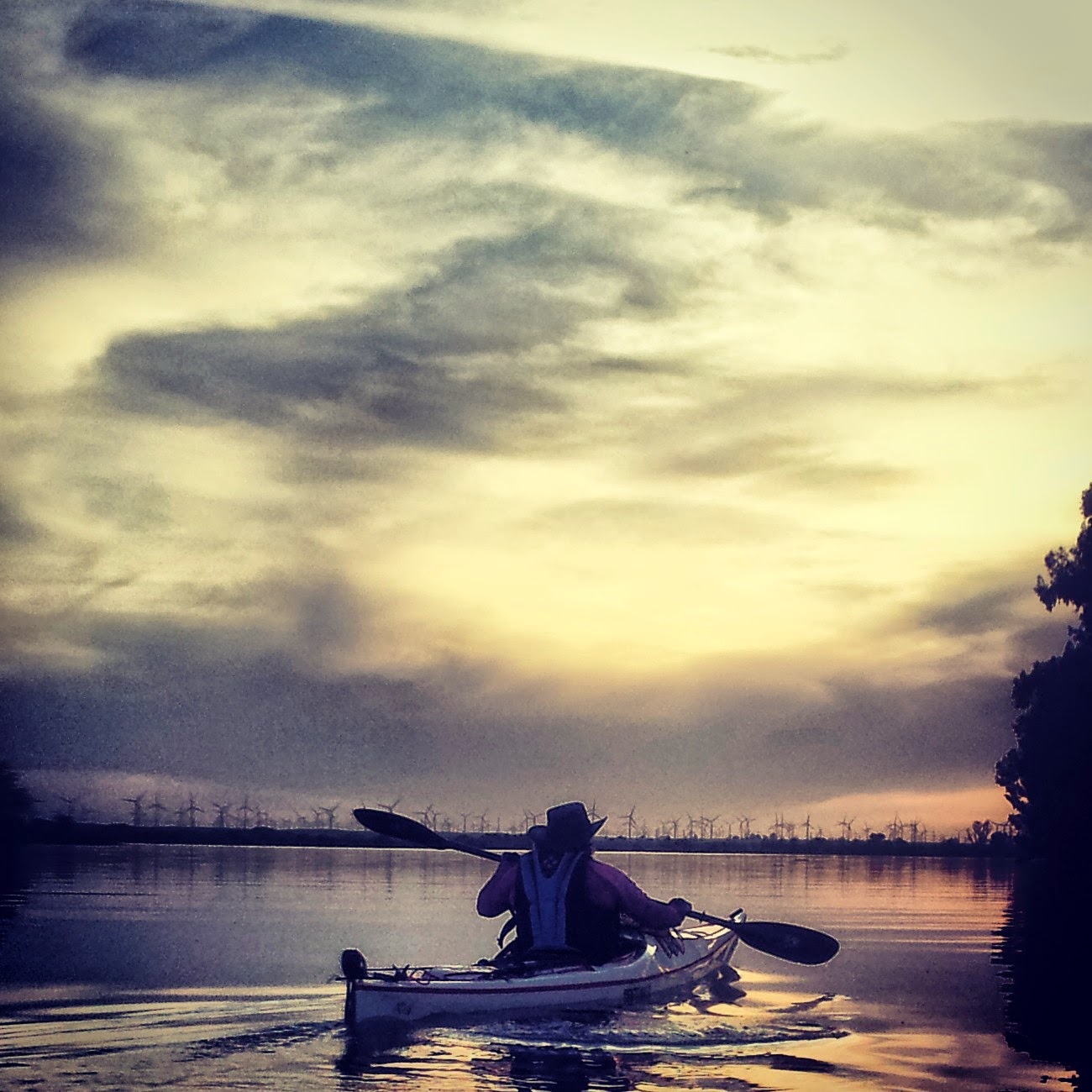 Monday I had a private tour and it turned out to be a spectacular day on the Delta! We launched just before 1:00 p.m. just north of Rio Vista and headed northeast on Steamboat Slough. This spot is at the top of my list for favorite places to paddle because of the scenery and the clarity of the water.

We launched just after low tide and headed up the slough with the incoming tide. Once we entered Steamboat slough we noticed a seal ahead of us looking for his own lunch. It was such a treat and we followed him all the way to Hogback Island where we stopped for lunch. The weather was absolutely gorgeous being in the low 80's and I needed to splash myself often to keep cool. As we passed Snug Harbor we came upon a few people cooling off themselves in some inner tubes. 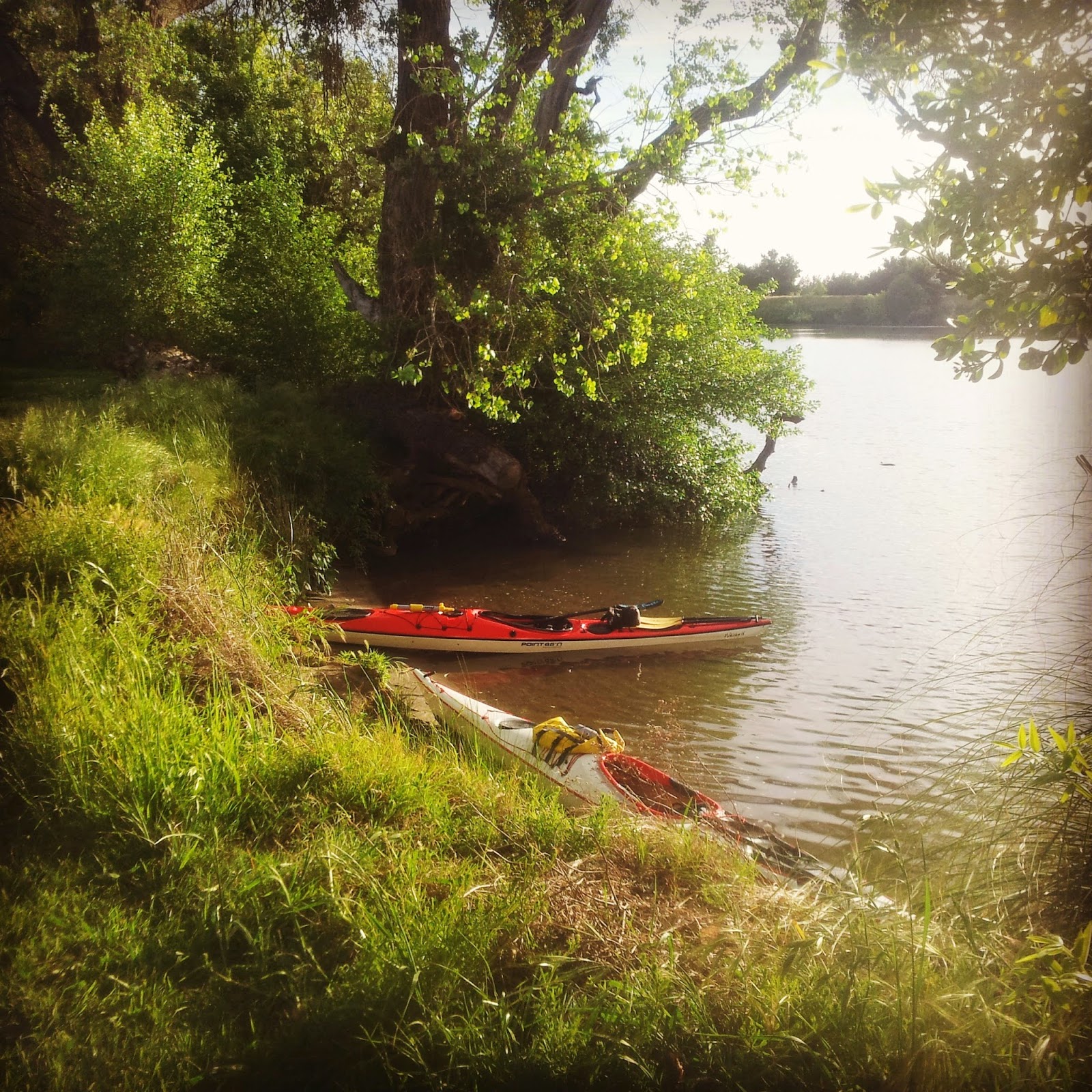 After lunch we left Hogback Island and continued with the tide passed Howard Landing where the Ferry takes cars from Ryer Island to Grand Island. We paused before crossing the ferry cable and made sure the operator knew we were there with some hand signals. The cable ferries are an integral part of life on the Delta and are actually fun to ride on.

When we reached the tip of Sutter Island we still had an hour before the tide would turn so we continued on Sutter slough for another 30 minutes before turning around. We stopped at Sutter Island just to stretch our legs and then proceeded down Steamboat towards home. We stopped once more at a nice beach on Hogback Island to stretch and use the facilities before continuing. As we headed southwest the sun sank lower and the sky lit up with golden light scattered through the sky and over the water. 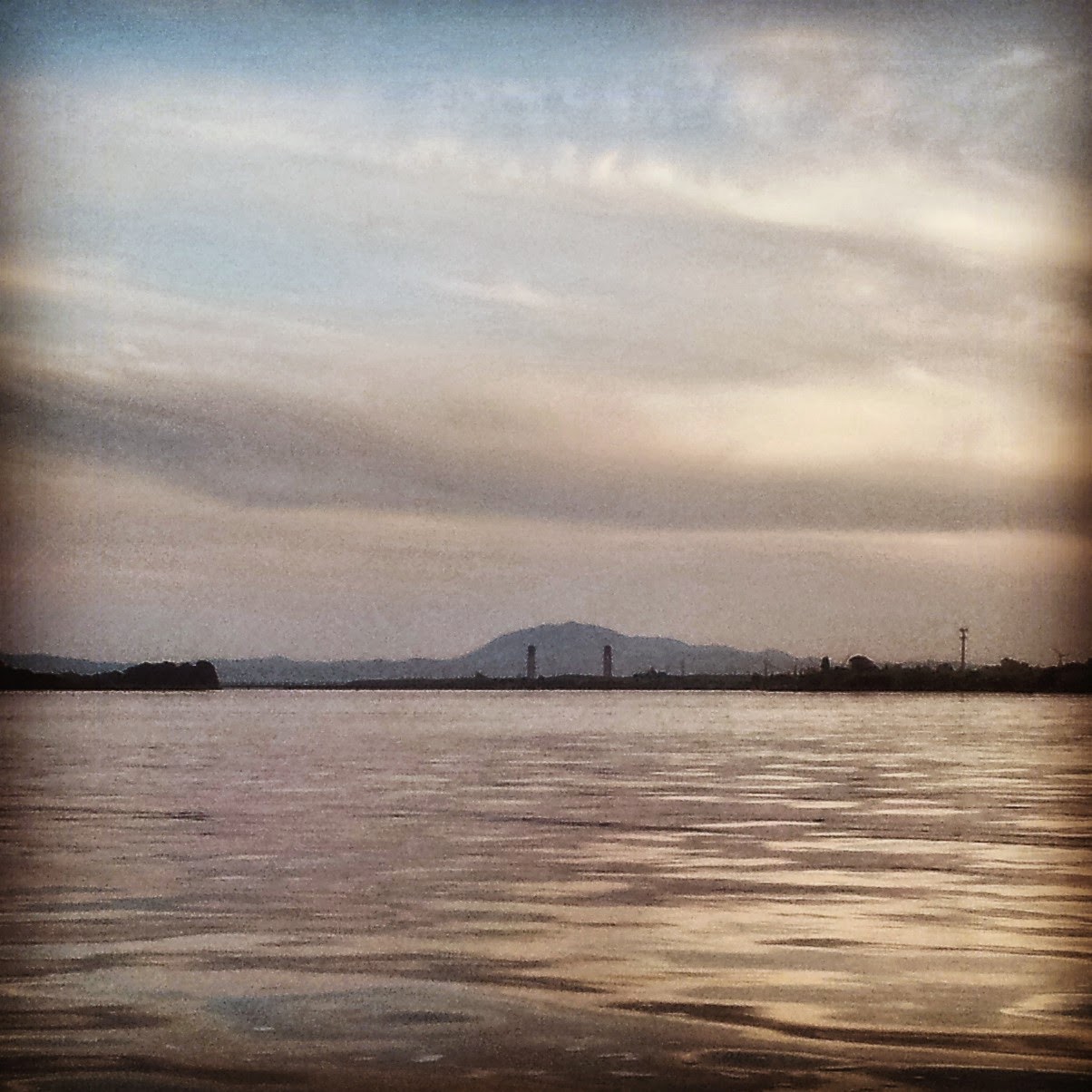 The water was like glass and small fish jumped around us as we paddled home. We crossed the shipping channel at a ferry angle without incident and landed safely with the moon rising behind us. After 18 miles of paddling we were treated to an amazing sunset and moonrise to end our day!

If you're interested in a private tour for yourself or your group, please contact me and I would be happy to guide you practically anywhere on the California Delta. 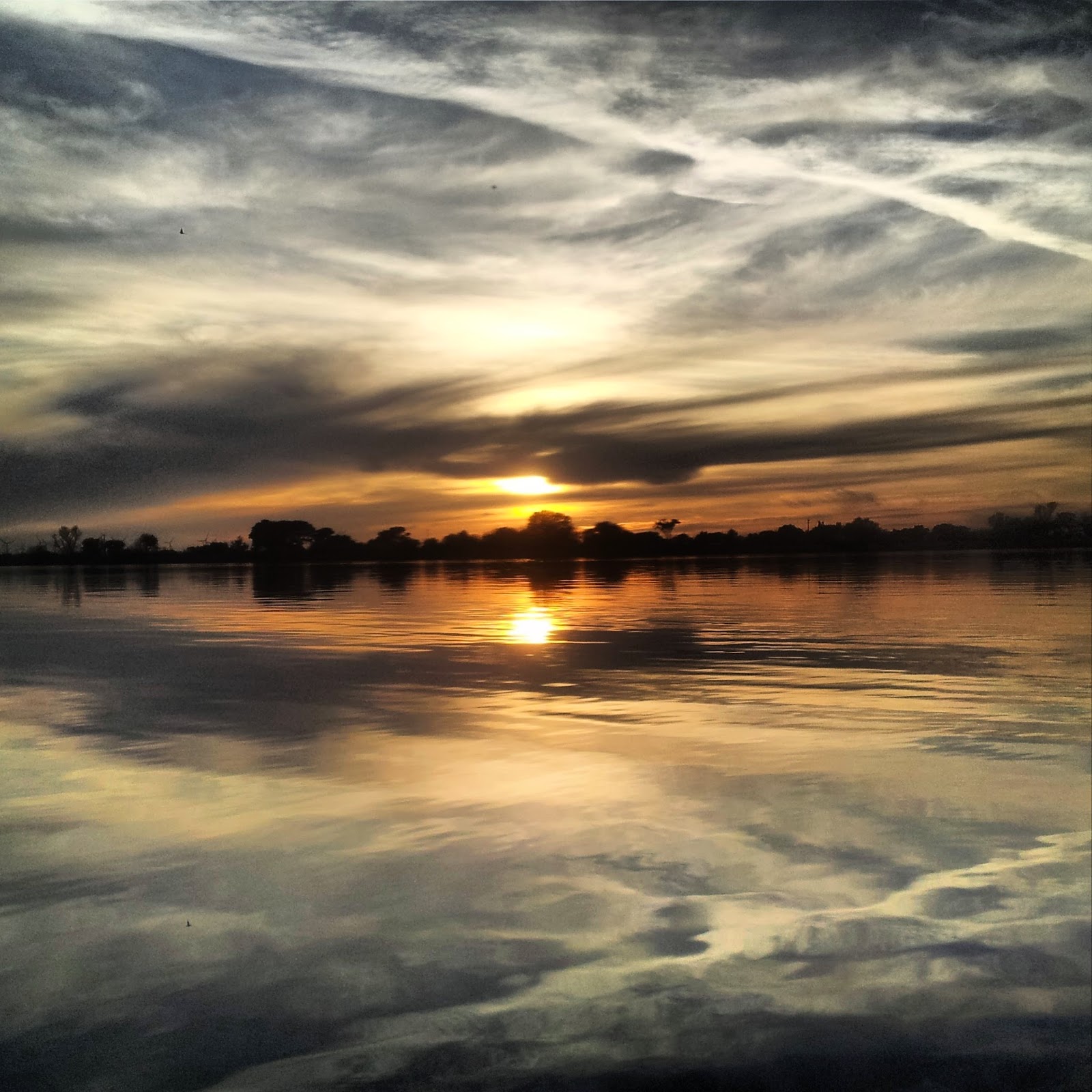 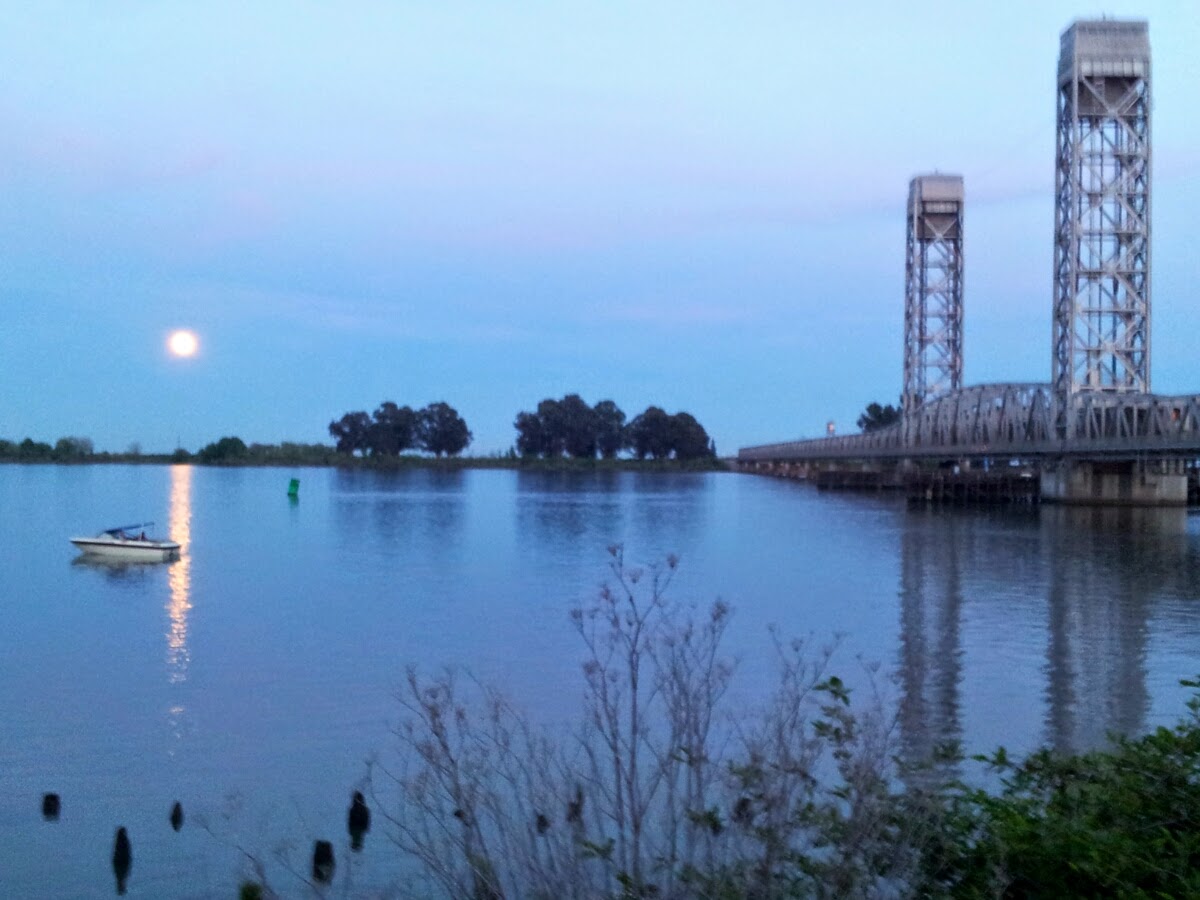 Posted by Kathy Bunton at 1:10 PM No comments: 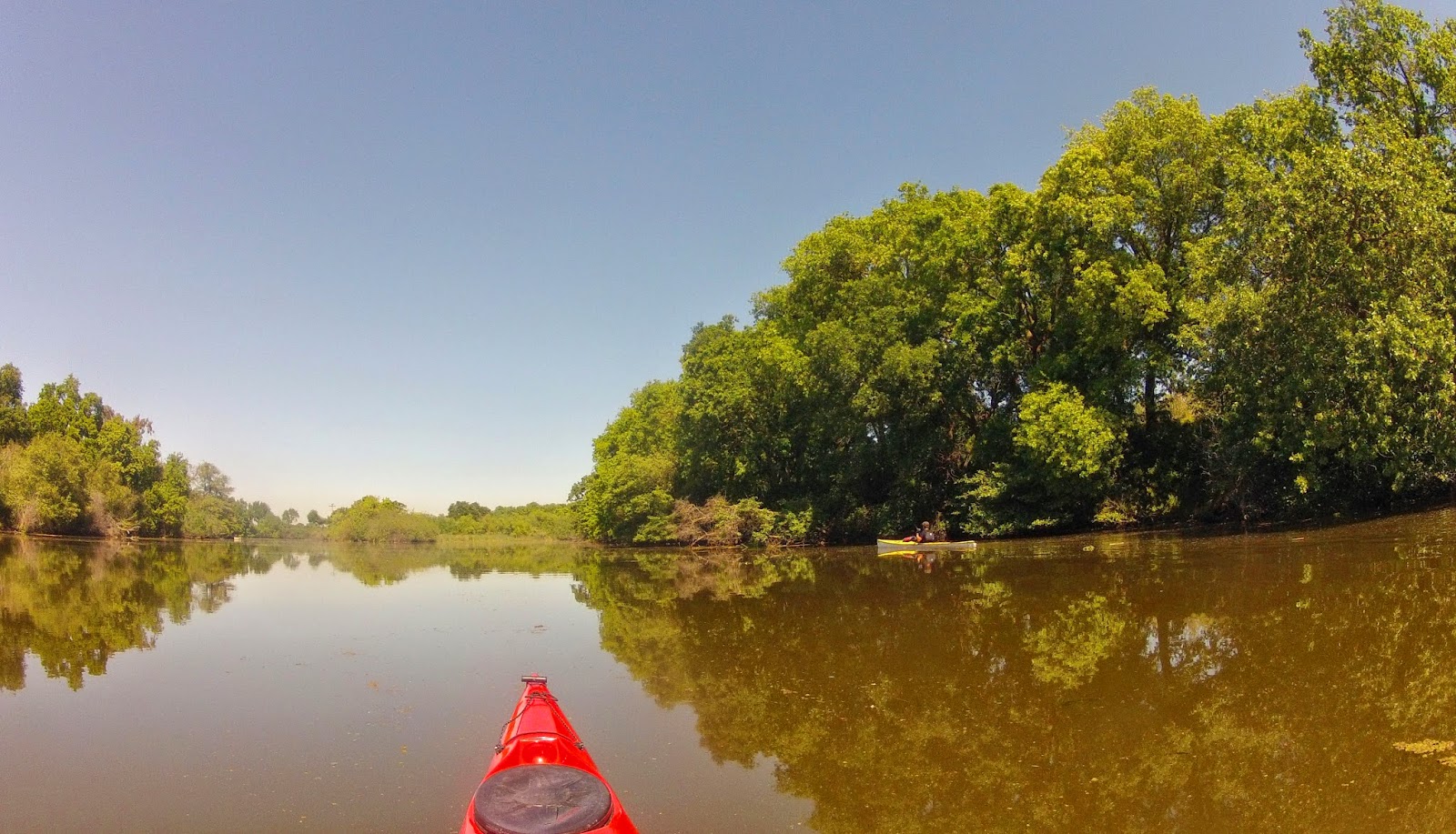 A few days ago I joined a great group of exploratory paddlers to check out Lost Slough. The weather was perfect and the scenery did not disappoint. 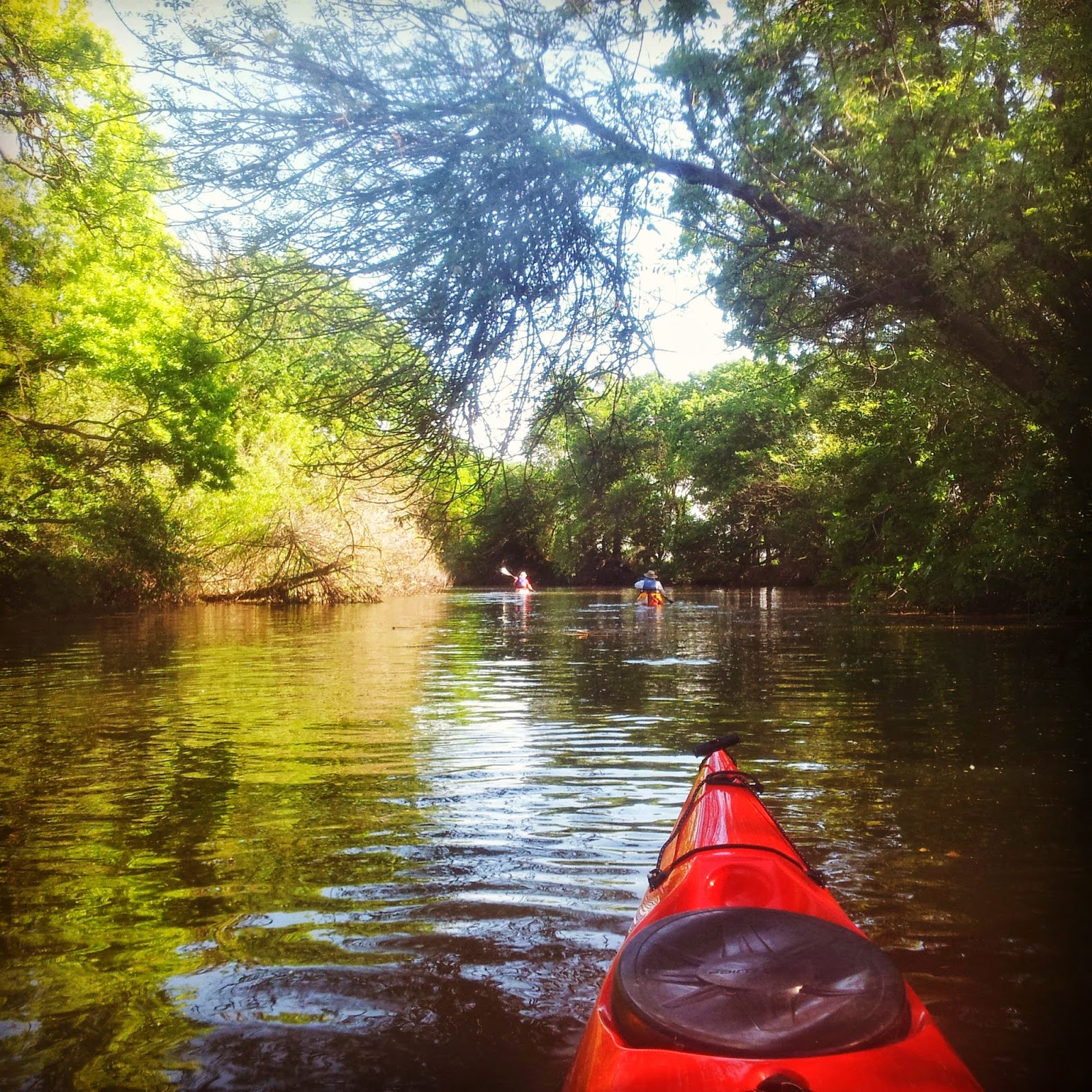 We launched from what used to be Delta Meadows State Park in Locke. There is a concrete ramp we used but it was steep and slippery. This was a one way paddle to Cosumnes River Preserve so we set up a shuttle prior to launching. Access to the ramp is limited and you need wheels to get your boat there and there are no facilities.

After setting up our shuttle we launched around noon and headed toward Meadows Slough where we found a great spot in the shade to eat lunch. After exploring Meadows Slough we headed to Lost Slough and paddled east towards our destination. Lost Slough is the perfect name for this spot, as you can become easily lost amongst the various channels that lead to the preserve. It's extremely quiet and peaceful and we only encountered a couple of fishing boats on our journey.

We ended up paddling a little over 10 miles with one portage and it was another great day on the water! 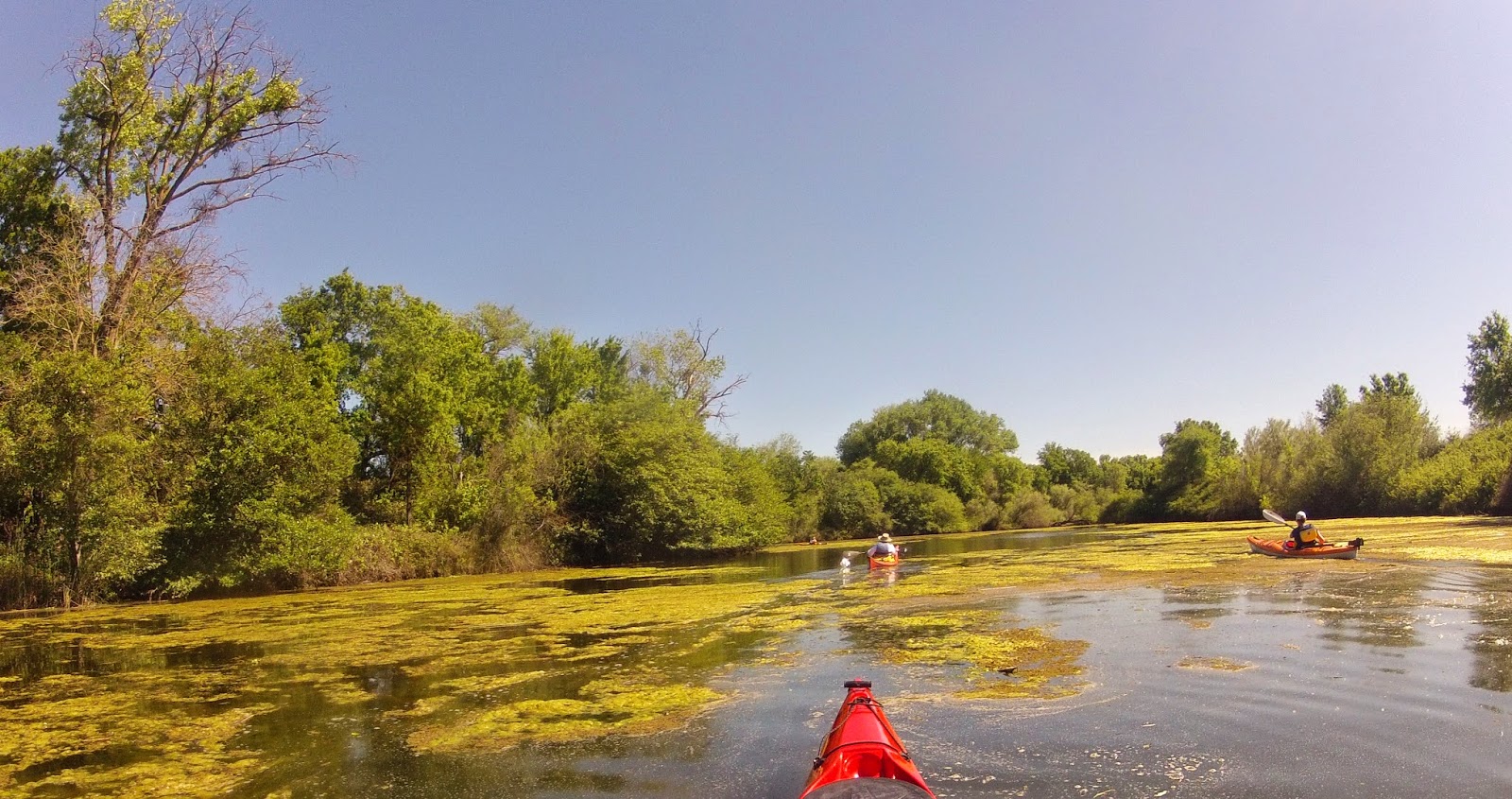 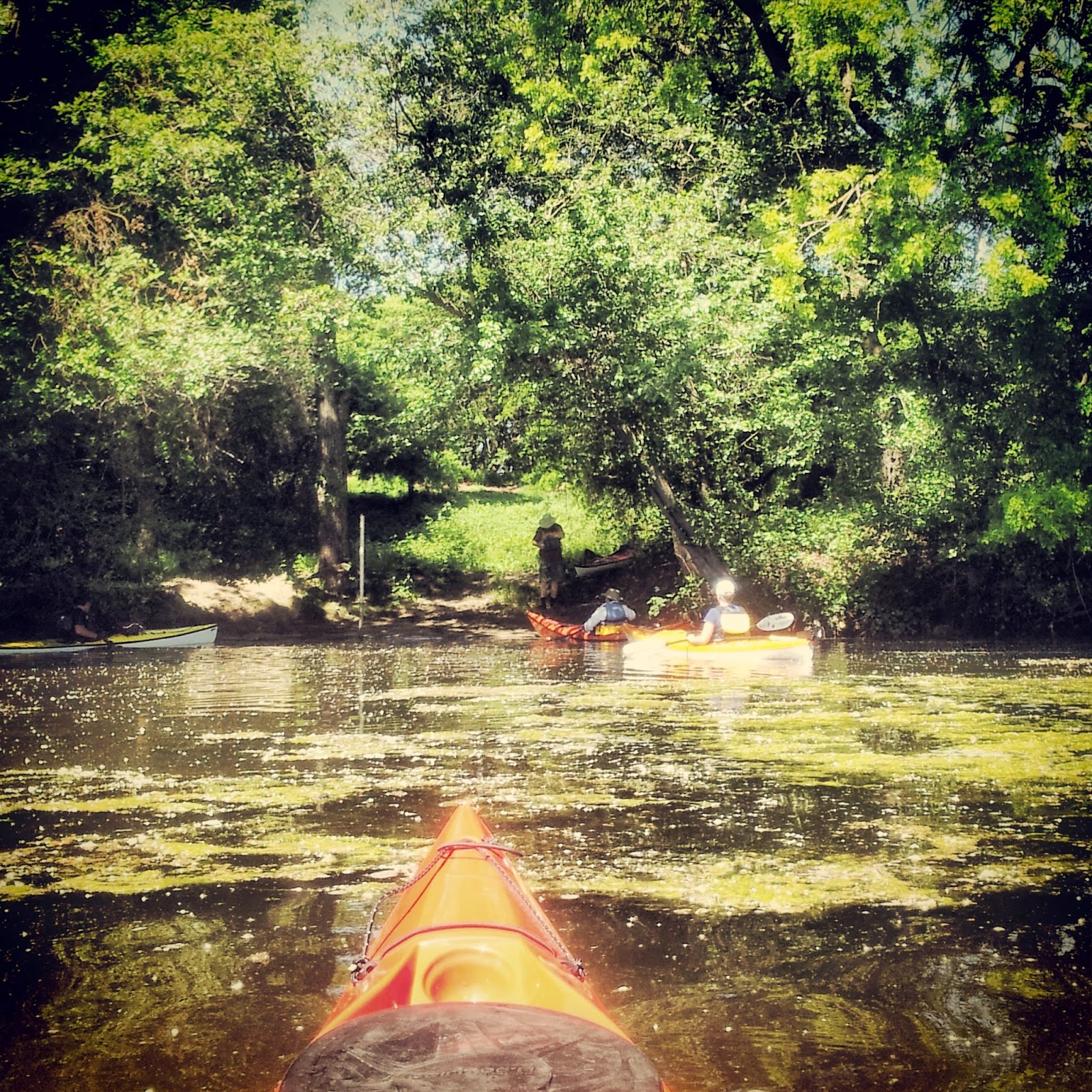 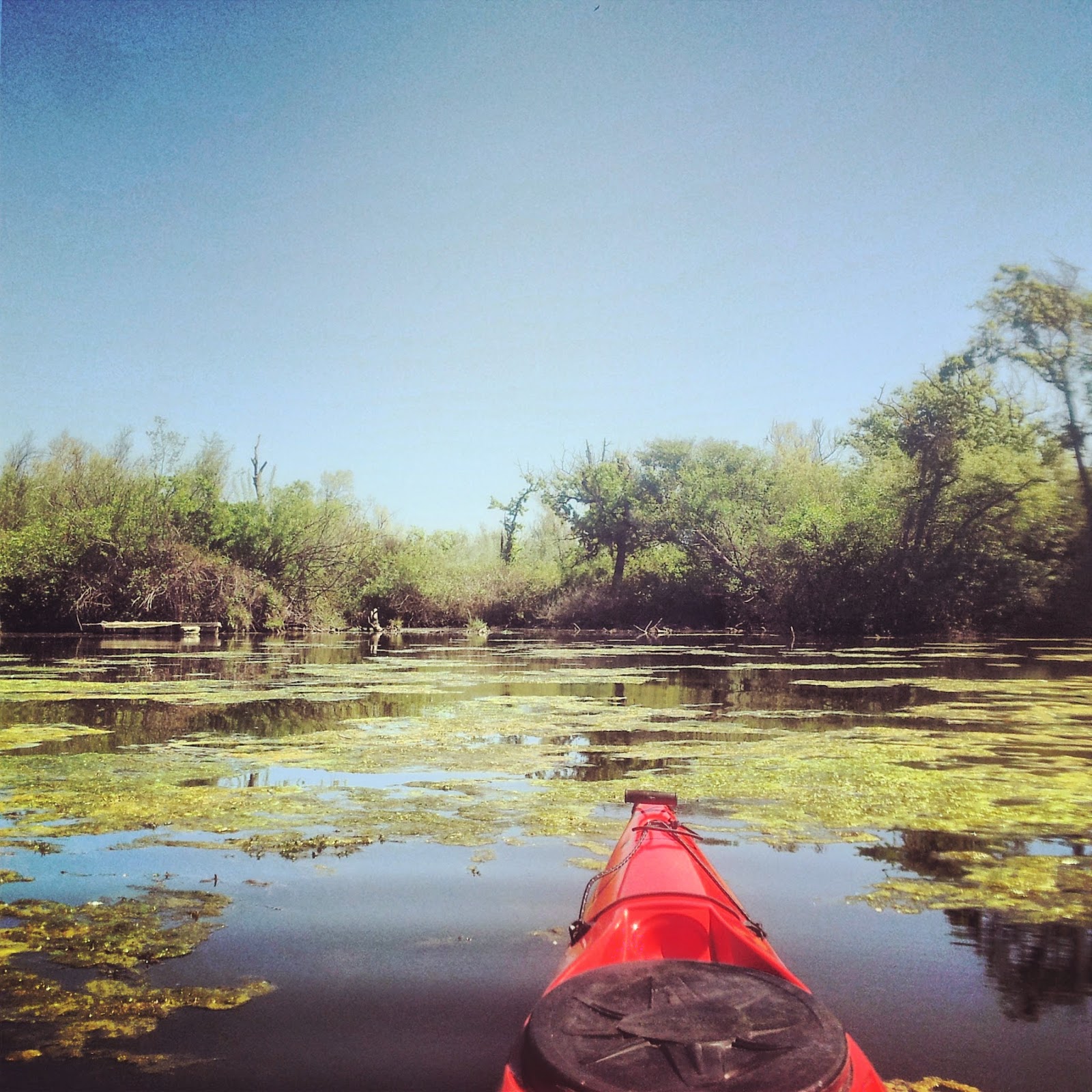 Posted by Kathy Bunton at 12:17 PM No comments: 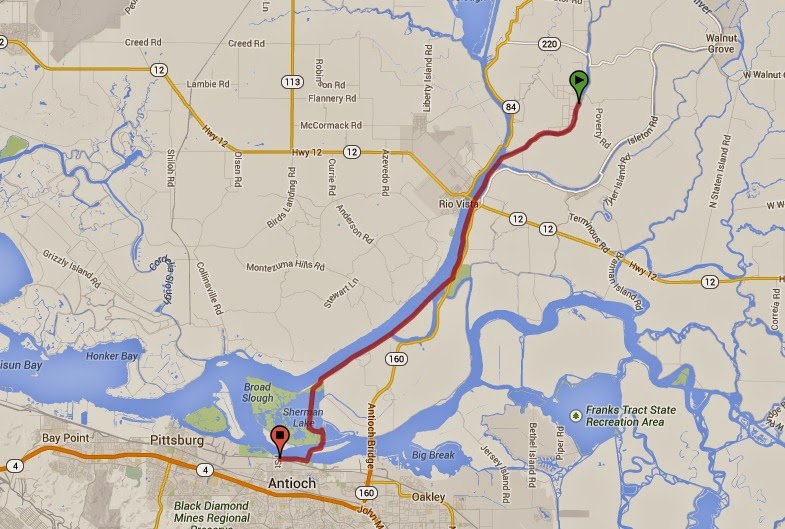 I had a great adventure with my friend Mary yesterday as we paddled a little over 20 miles from the Hogback Island Recreation facility in Walnut Grove to the Antioch Marina. I plan on participating in this years California 100, which takes place Memorial Day weekend, and I want to get some longer paddles in before the big race. It's not so much of a race for me but I consider it a challenge I'd like to conquer for myself. You can visit their site to get more info about the 2nd annual California 100. 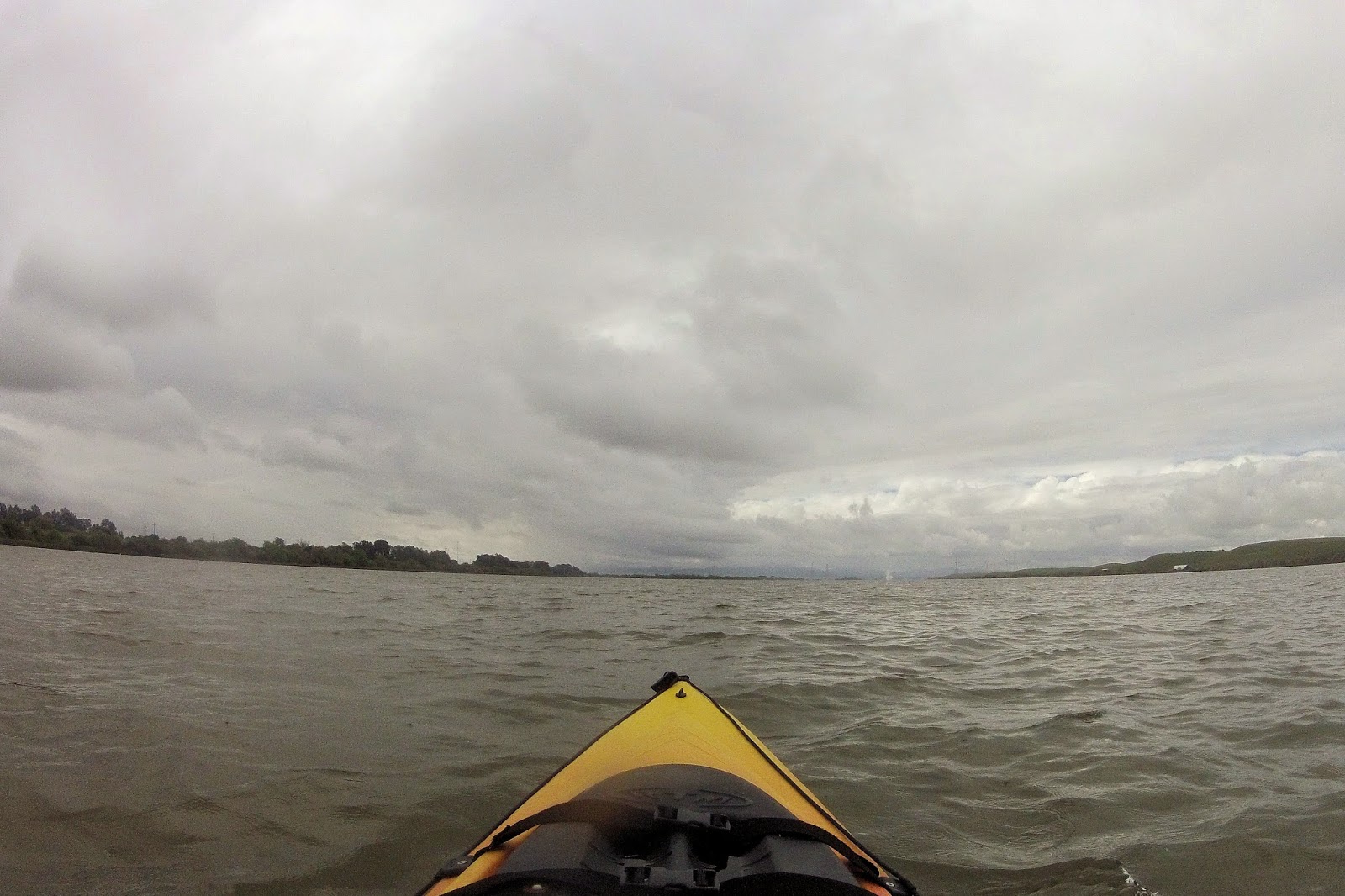 We met at the Antioch marina at 7:30 a.m. to leave a vehicle for our return. We then headed to Hogback Island where we entered the water at 9:00 a.m. Before leaving the house, I checked NOAA weather and also turned the news on TV and both predicted that the skies would clear by 8:00 a.m.. Both were wrong! We chased sunny skies the entire paddle but never caught up. It rained on us for the majority of the journey but it didn't hinder our progress or our enjoyment for the day. 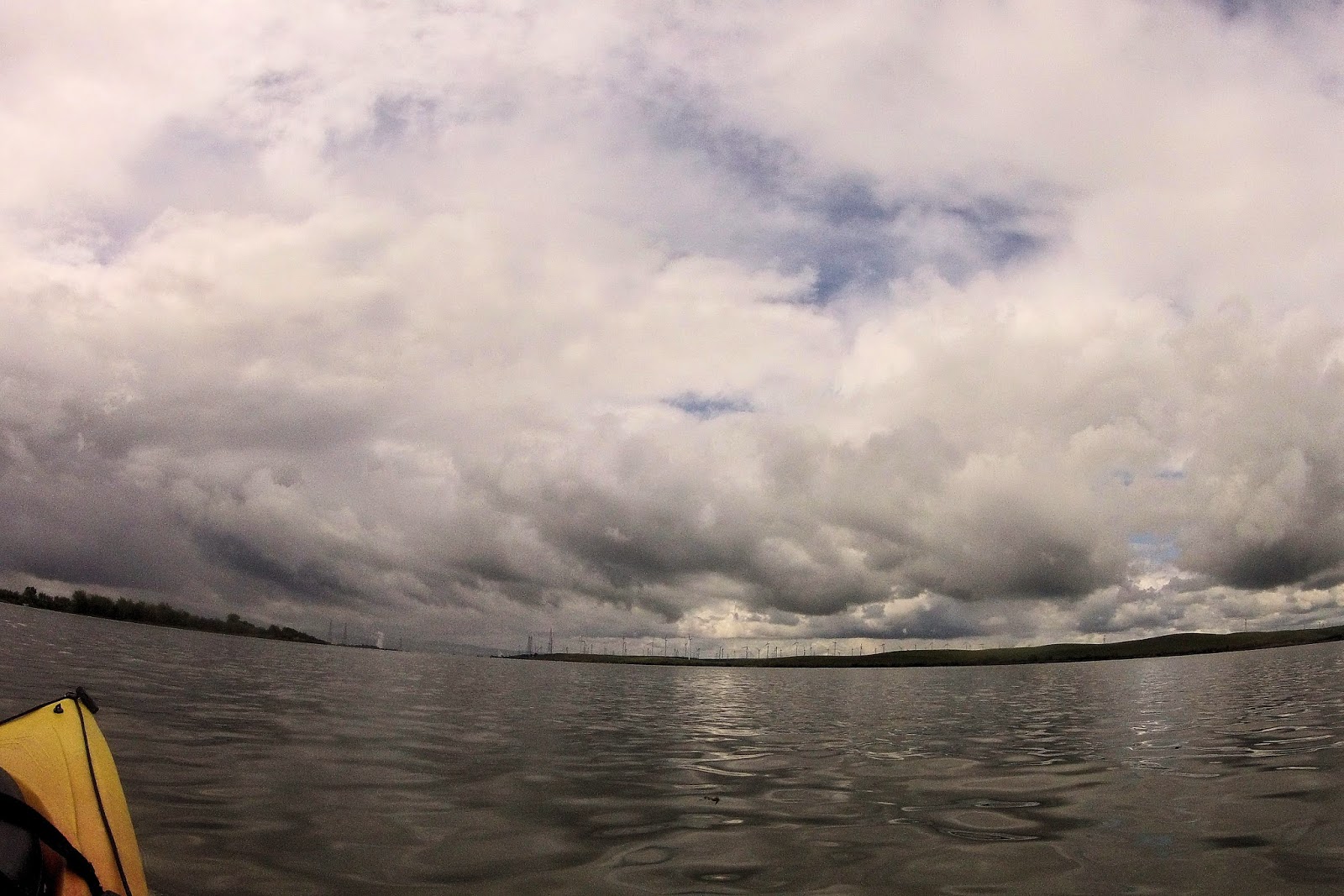 I thought I would track our progress with an ap I have on my droid and it worked great until it drained my battery after 2 hours and 22 minutes on the water. I was able to save the data before my phone completely died. The ap said we paddled 9.6 miles with a top speed of 6.4 mph with an average speed of 3.7 mph. We had reached Windy Cove on Brannan Island when my phone died and we found a nice beach to have lunch. 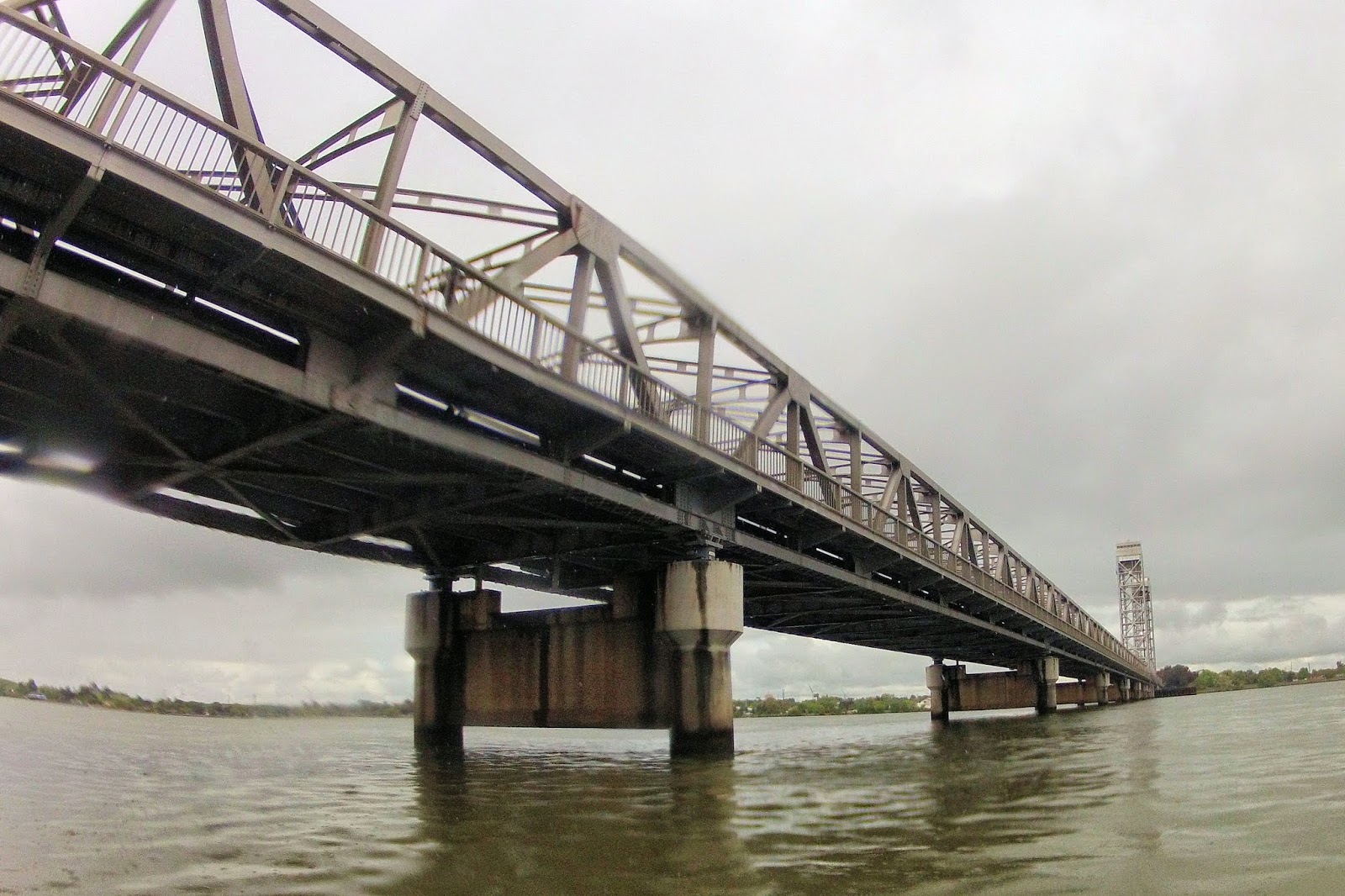 We were back on the Sacramento River after a brief lunch and continued with our journey feeling good about our progress. We paddled at a leisurely pace for the next 7 miles until we reached Sherman Lake. This area is well known for kiteboarding and windsurfing and they would have loved the conditions we encountered. The first 17 miles were completely flat with barely a breeze but when we came upon Sherman Lake the wind must have been blowing at least 15-20 knots from the southwest. We paused in the lee of a small island to refuel with a snack and some liquid before tackling what lie ahead of us. To get to the other side of the lake where there would be shelter from the wind and waves we needed to cross 1.5 miles of 2-3 foot wind waves hitting us broadside. About half way across I turned to Mary and asked how she was holding up and she said "we're going to finish this thing!" With our take out so close, we paddled with determination and made it to the other side without incident. As we turned and looked at where we had come from the wind suddenly died down and the water was much calmer than it had been just moments before. 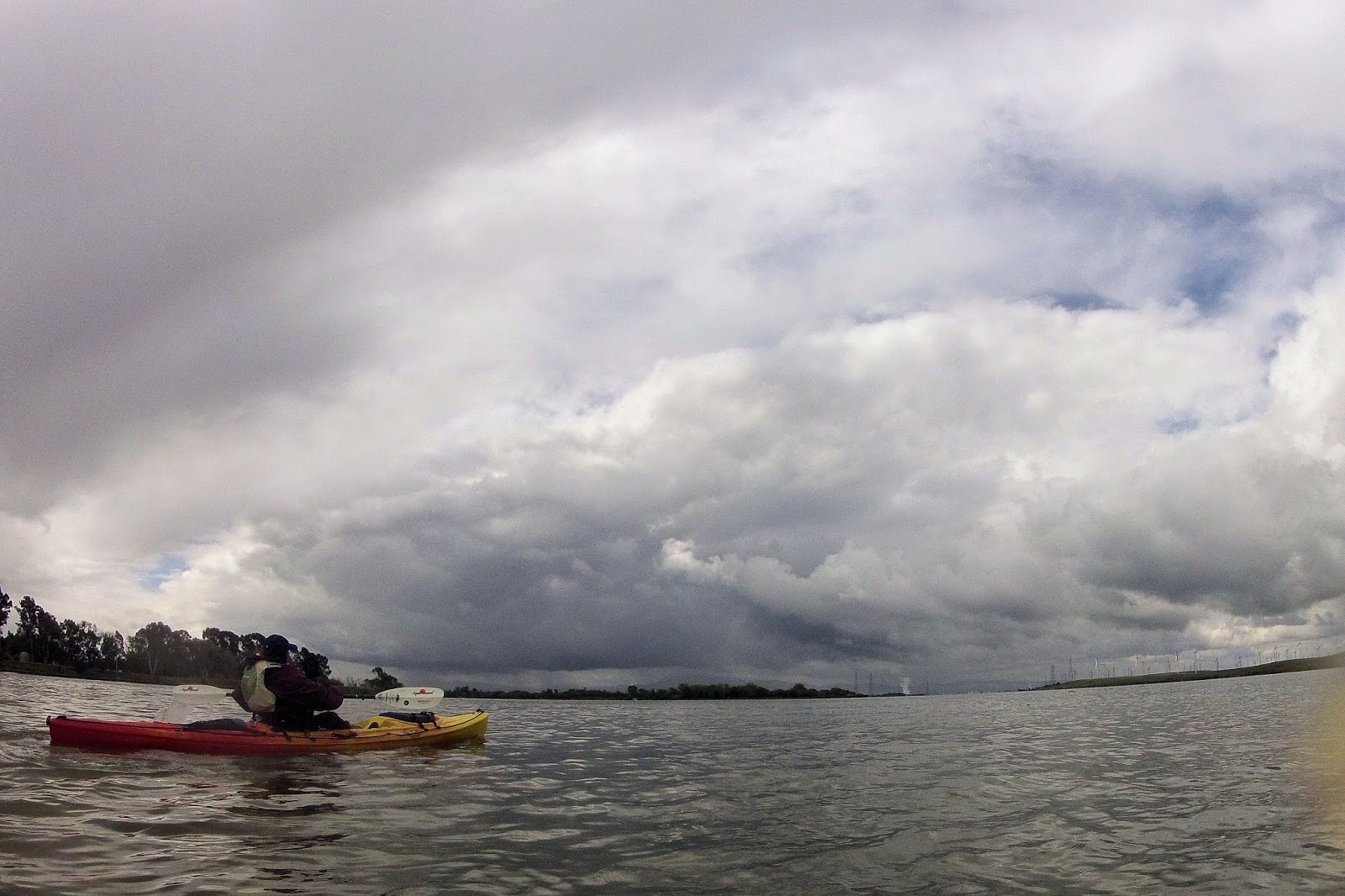 We still had to cross the San Joaquin River before we could call it a day and with less than 2 miles to go, our goal was in sight. We were both tired by this time but seeing our take out gave us new energy. Paddling Mayberry Cut was rough in the sense that we now had a pretty good current against us and I was beginning to worry that I had made a mistake with the tides. I feared that we missed the slack tide and we would have to paddle against the current for our final stretch. Thankfully, when we left Mayberry Cut and entered the San Joaquin, we still had some current to help us westward but the wind had picked up again and was hitting us head-on.  We crossed over to West Island and paddled close to shore until we reached its tip. We began to cross the rest of the river but we hit a sandbar and ended up having to drag our boats about 50 yards before we could re-enter them. 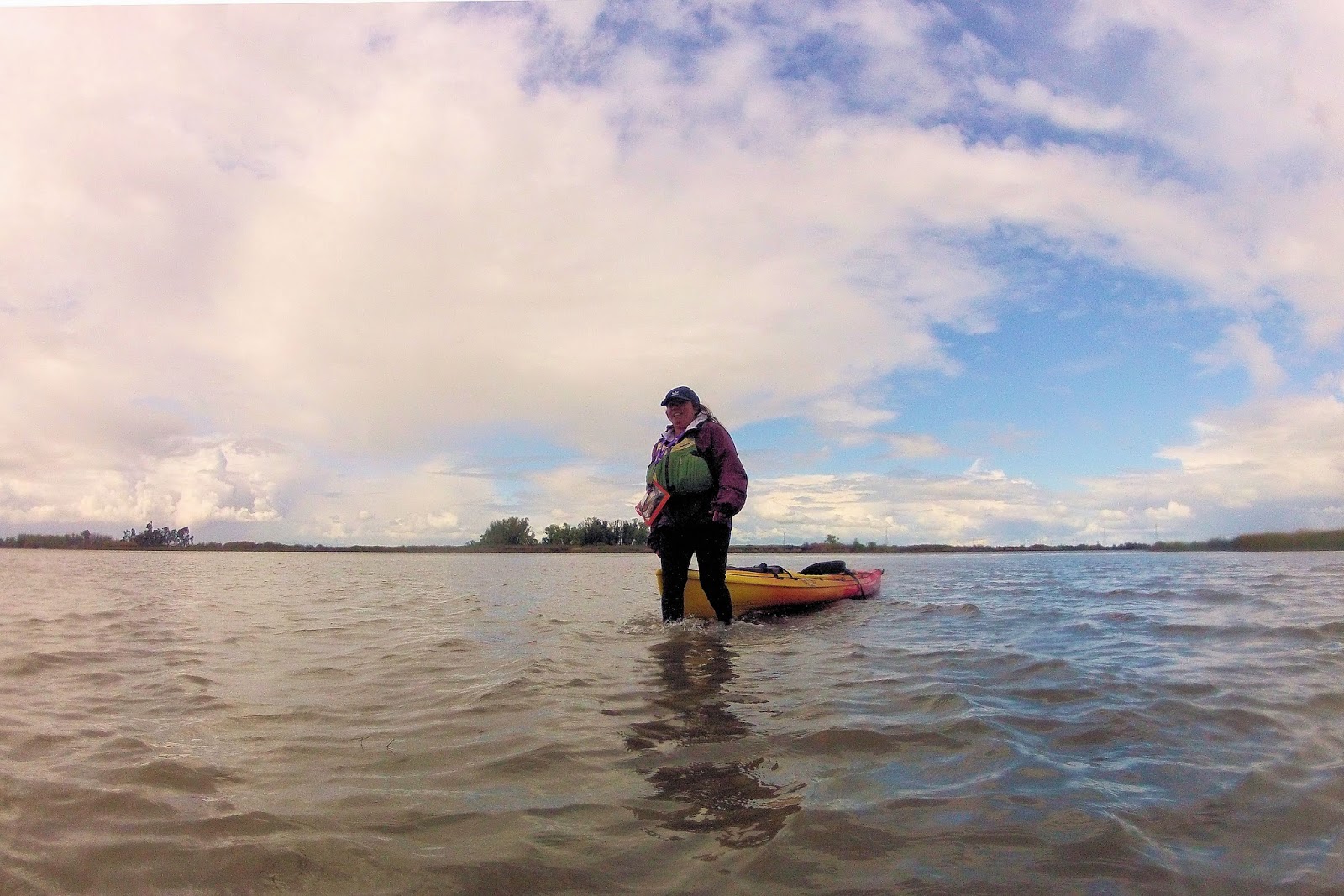 We finally reached the Antioch waterfront and made it safely to the marina but not before witnessing a crime taking place before our very eyes. We witnessed two men in a powerboat and a man in a truck unload and  throw 5 sturgeon, of which at least 2 were over 60 inches, into the back of the truck. The limit is one and they must be between 40 and 60 inches. It breaks my heart to see such blatant disregard for our natural resources. I'm sure this wasn't their first time as it looked like something they do often as the truck sped away and the boat motored off in a hurry. It makes me wonder how many others take fish illegally.

The adventure was a success and I look forward to paddling longer distances and participating in the California 100!

B & W Resort to Happy Harbor 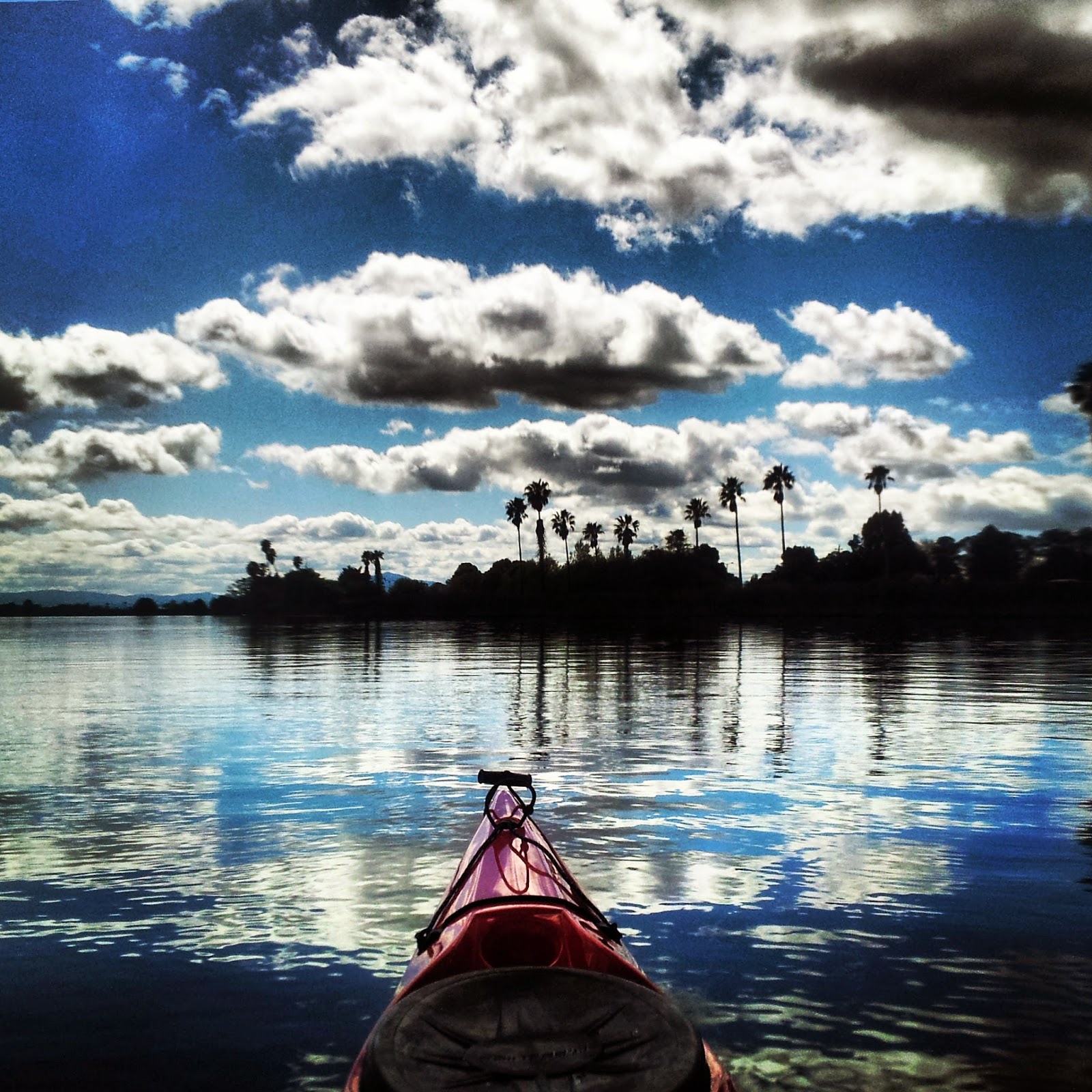 We had another amazing day on the Delta paddling from B & W Resort to Happy Harbor for our "Wednesday Wandering." When launching from B & W Resort if no one is at the ramp to take your fee you should go to the snack bar and pay. I would check with the store or management as to the cost to launch because it seems to vary. Plan on $4-$10. The resort is very friendly and has clean restrooms but is also very busy so be sure and launch quickly after bringing your kayak to the ramp. 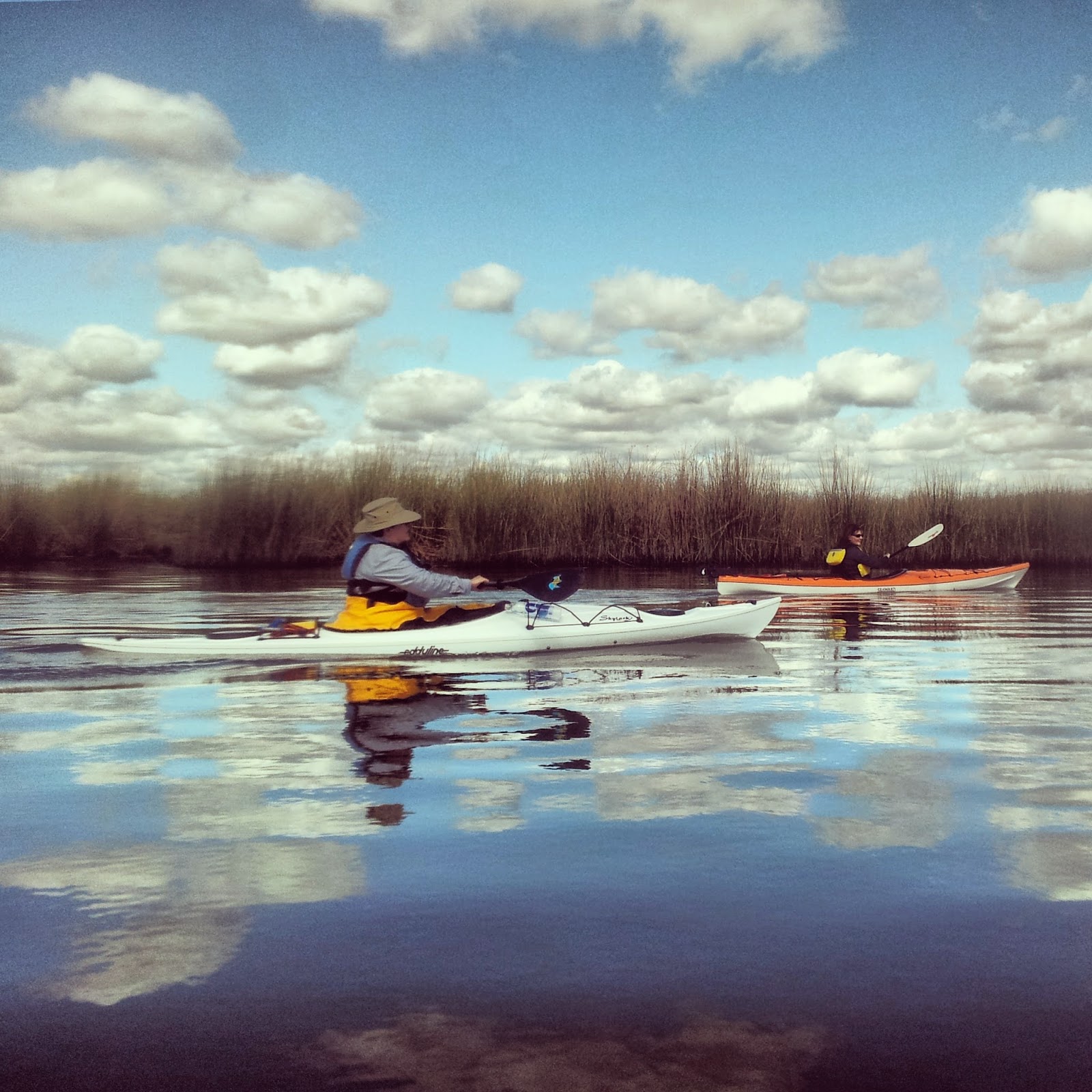 The temperature this morning was a little on the cool side but by the time we met at the launch it seemed to have warmed considerably. We launched a few minutes before 3:00 with low tide predicted for 2:46 at the Georgiana slough entrance.

We paddled the Mokelumne under puffy clouds with a gentle current helping us along. Our original plan was to paddle to Korths Pirates Lair and grab a bite to eat but they closed at 3:00 so we paddled west and onto the San Joaquin River towards Happy Harbor. 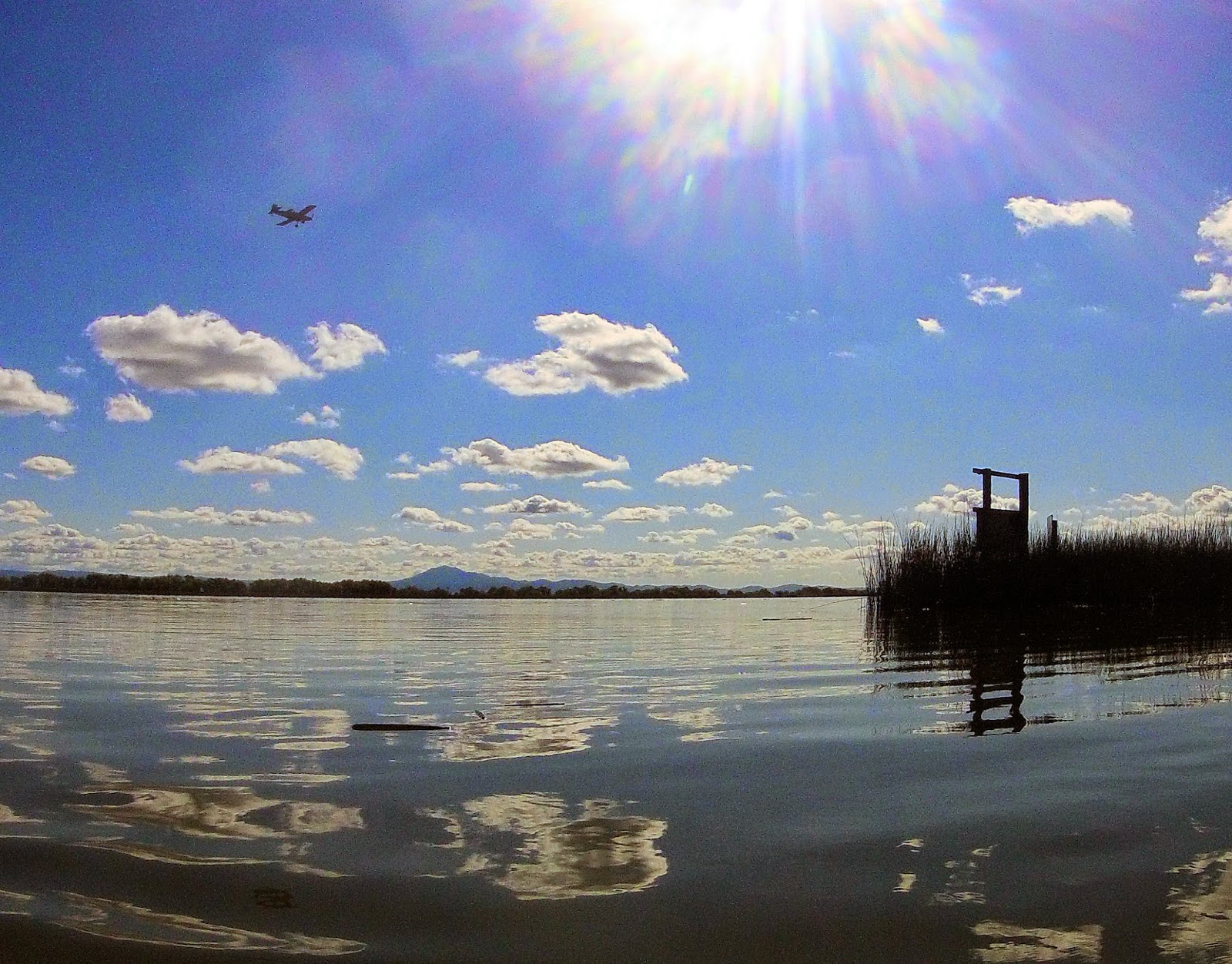 We didn't find a good place to land so we rafted up for a snack break before our return. There were lots of coots, cormorants and sparrows flying about but we spotted only one beaver or otter on our return. The water was like glass for the majority of the paddle and it was an easy 10 miles timed with the tides. On our way back to the launch, we were treated to a flyover from a crop dusting plane. We waved and he politely dipped his wings left and right to return our greeting. I actually captured it on my GoPro but he was much closer than it appears on the video. 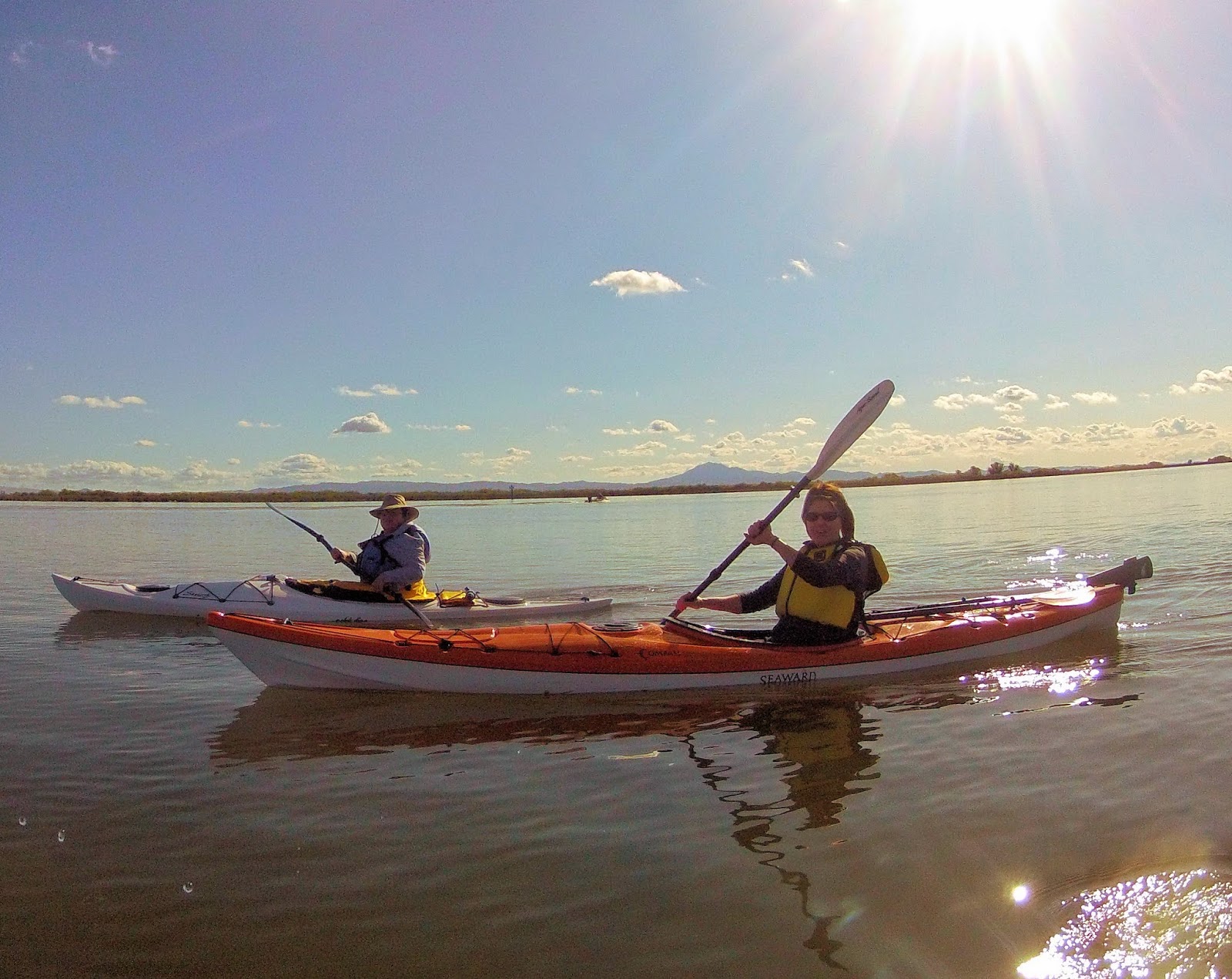 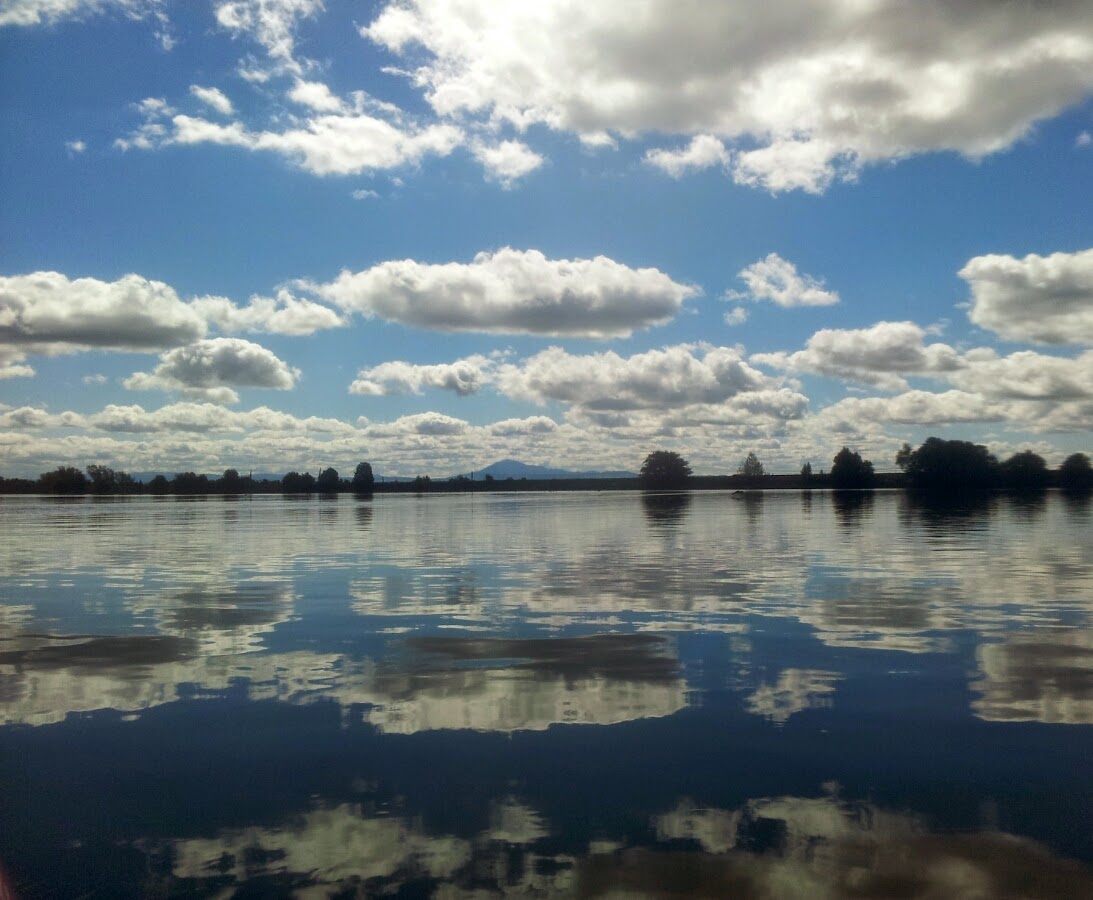 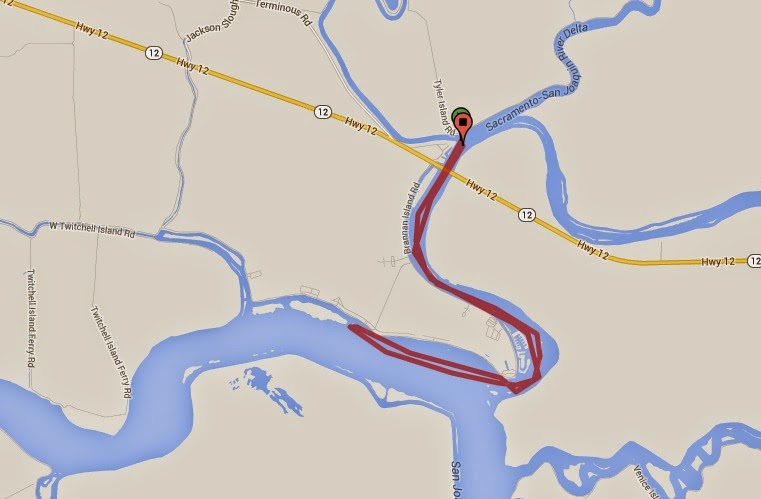 Great day!
Posted by Kathy Bunton at 10:11 PM No comments: