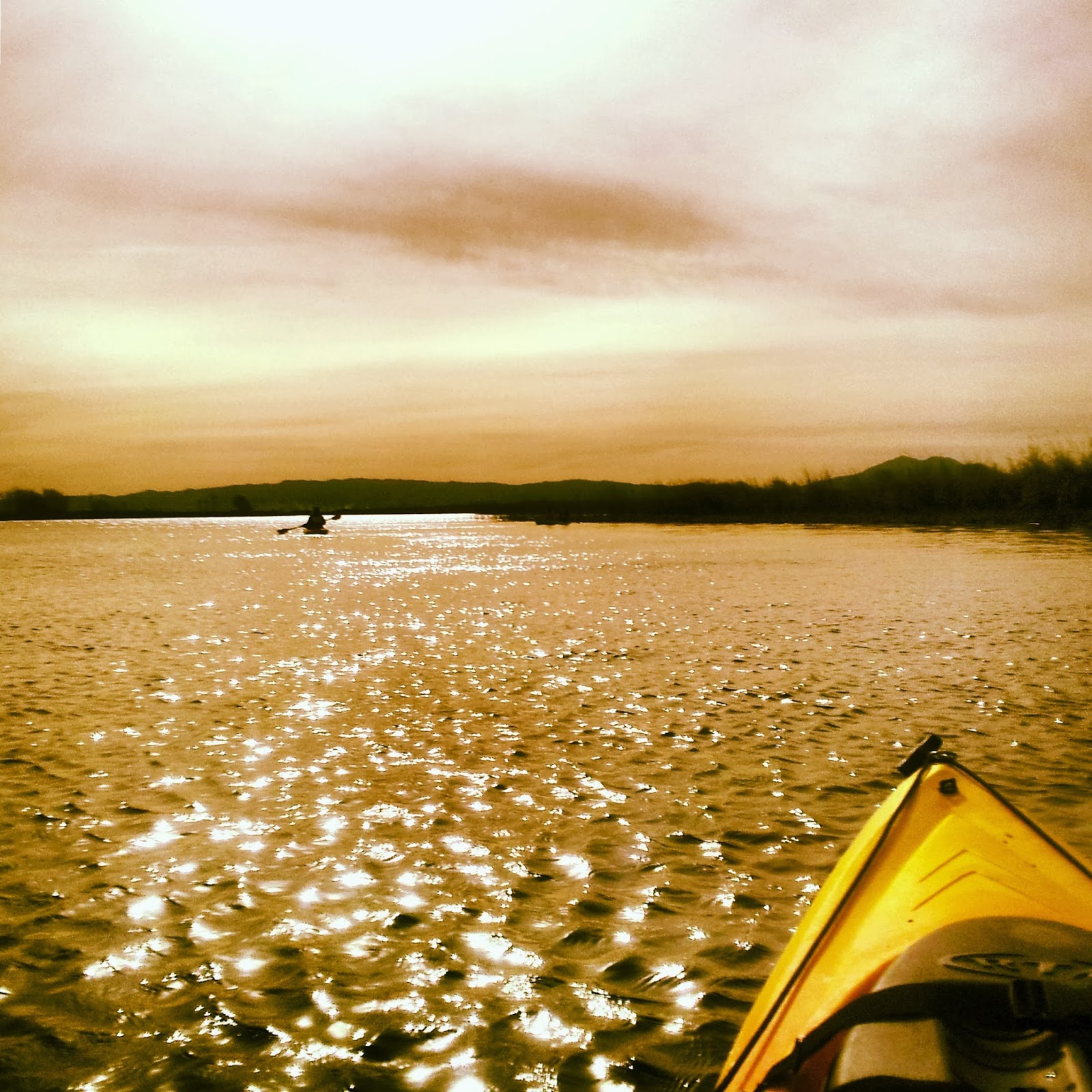 Seven paddlers joined me today to do some exploring around Little Mandeville Island. We launched from Holland Riverside Marina at 12:30 under hazy skies with low tide predicted for 2:15 at  -.83 ft.. The marina charges $5 to launch kayaks and you can use the envelope located next to the little store on the dock. When launching, the marina prefers you use the beach adjacent to the ramp. After unloading your kayak you can park down near the restrooms as the parking spaces near the covered berths are for residents. There are restrooms available and there will be a restaurant, Daryl's BBQ opening this summer. Kevin, the owner of the marina is working hard to get the place fixed up. 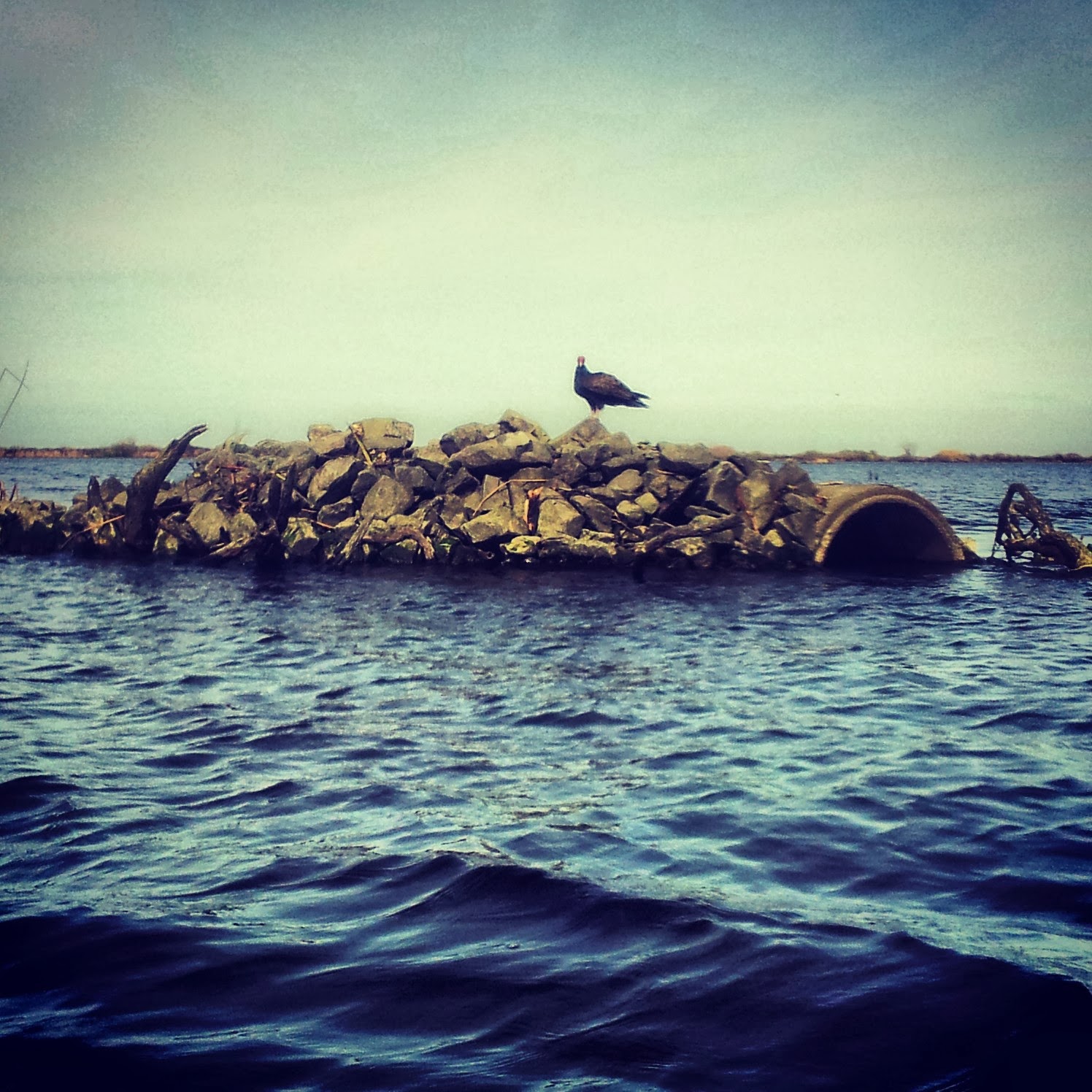 We headed north on Old River against a mild headwind and took our time keeping a look out for wildlife. As we came around one of the marsh islands we spotted a flock of White Pelicans. Besides the Sandhill Cranes, White Pelicans are my favorite birds that inhabit the delta. This flock was the biggest I have seen as there had to be at least 50 of them. Along with the pelicans we saw a couple of hawks, cormorants,  a few turkey vultures and hundreds of coots all floating in a line about a 1/4 mile long. 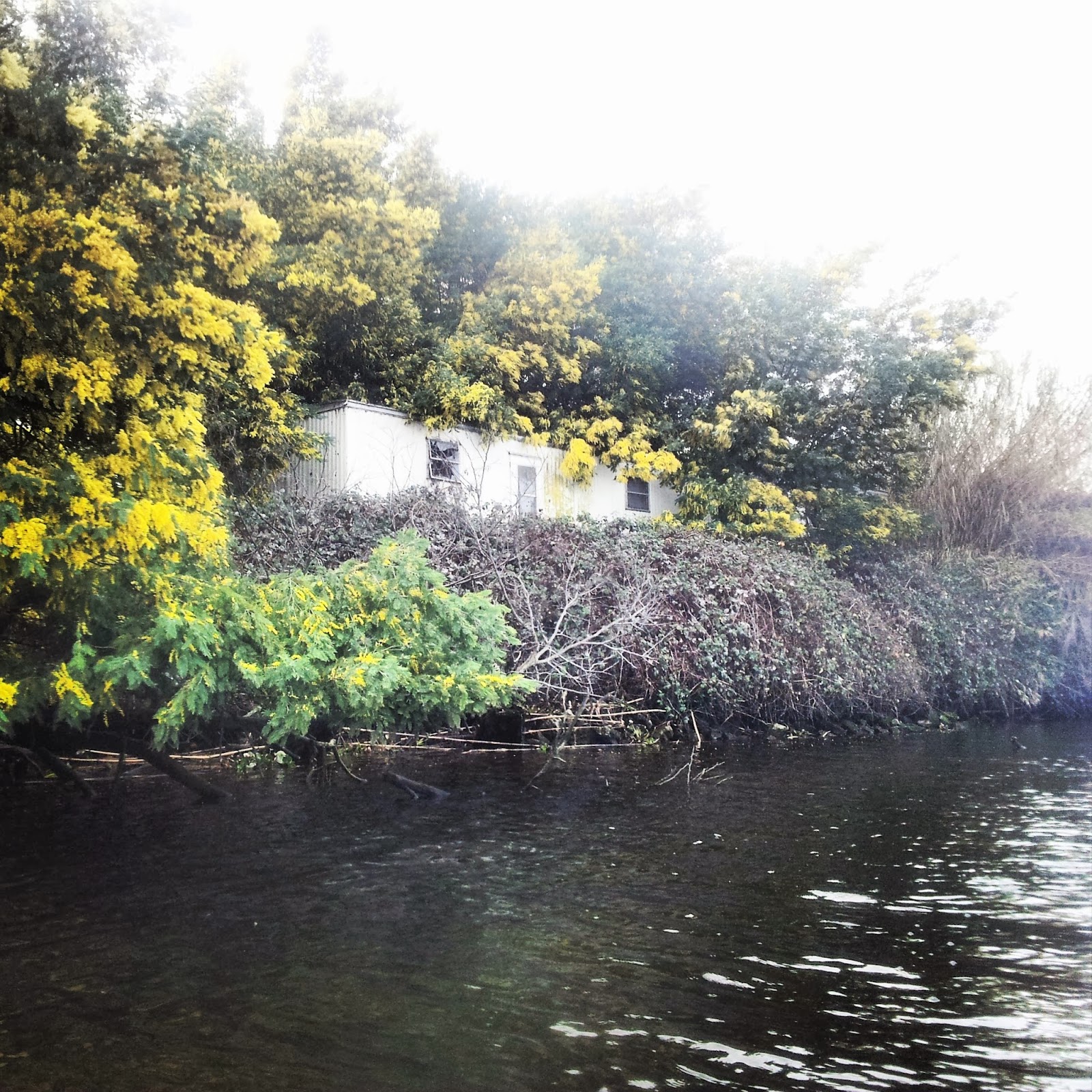 While paddling this area it's important to remember landmarks as it can be easy to get lost or disoriented while paddling around the multitudes of little islands. Most the the islands are tule or marsh and not suitable for landing. We did find a beach on the south side of Rhode Island that would make for a good stretch stop. After rounding Rhode Island we came upon the remnants of Little Mandeville Island. Little Mandeville was a 376 acre island that included a pheasant club and farm that flooded back in 1994 which was believed to be caused by a beaver. From what little information I could gather, the Department of Fish and Game was going to convert the island to a habitat for birds and mammals but it never came to fruition due to its flooding. The island is now more like a lake with lots of duck blinds dotting the waters. 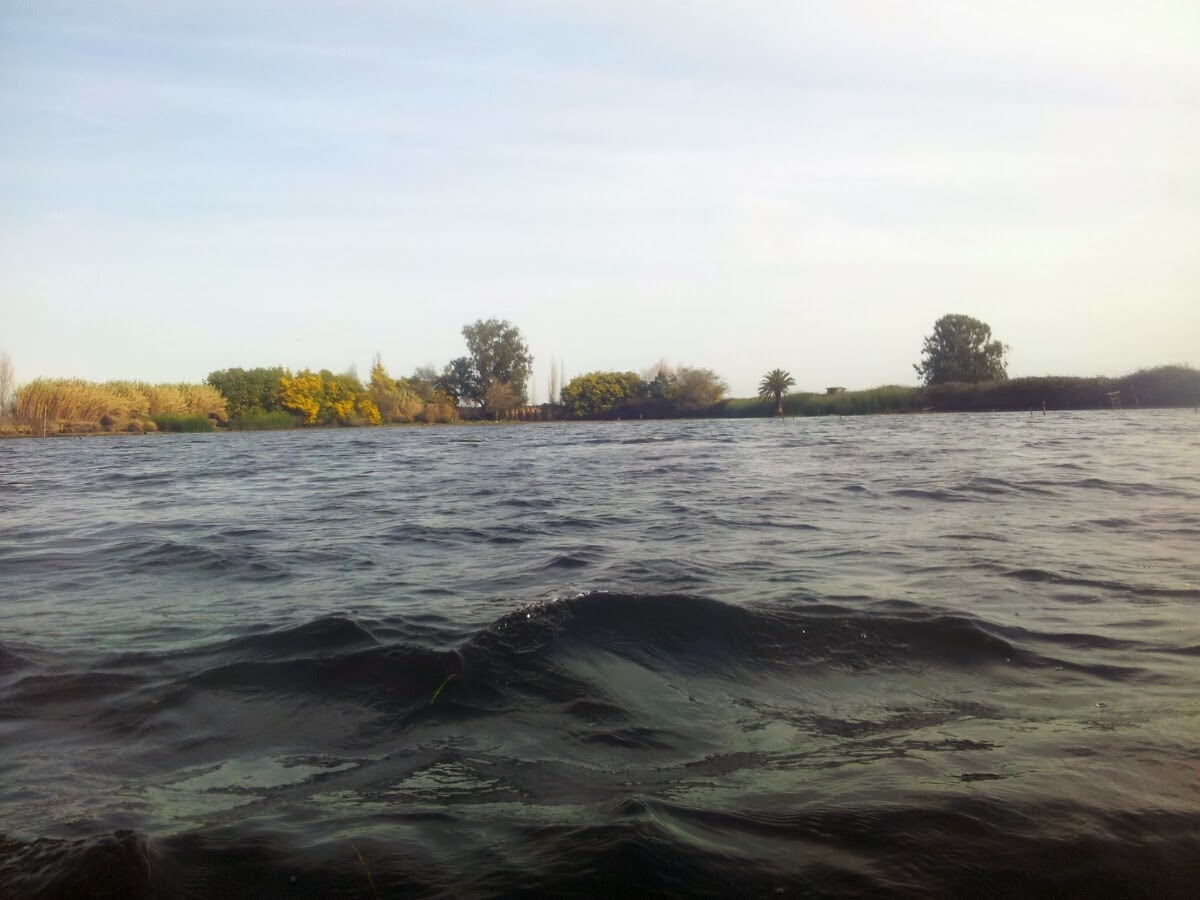 We found a spot to stretch our legs and have a snack just inside the island on what's left of a levy. After refueling we got back on the water and returned to the marina in about an hours time with the wind at our backs. It was a great day and it was wonderful meeting new friends to explore the Delta with! 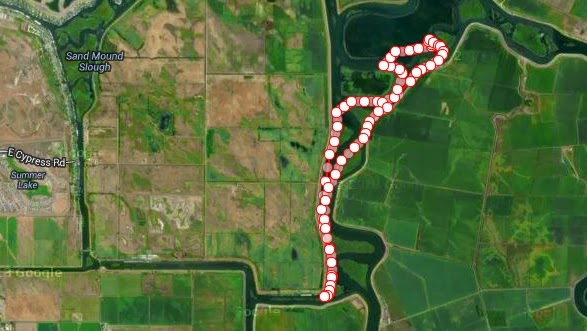 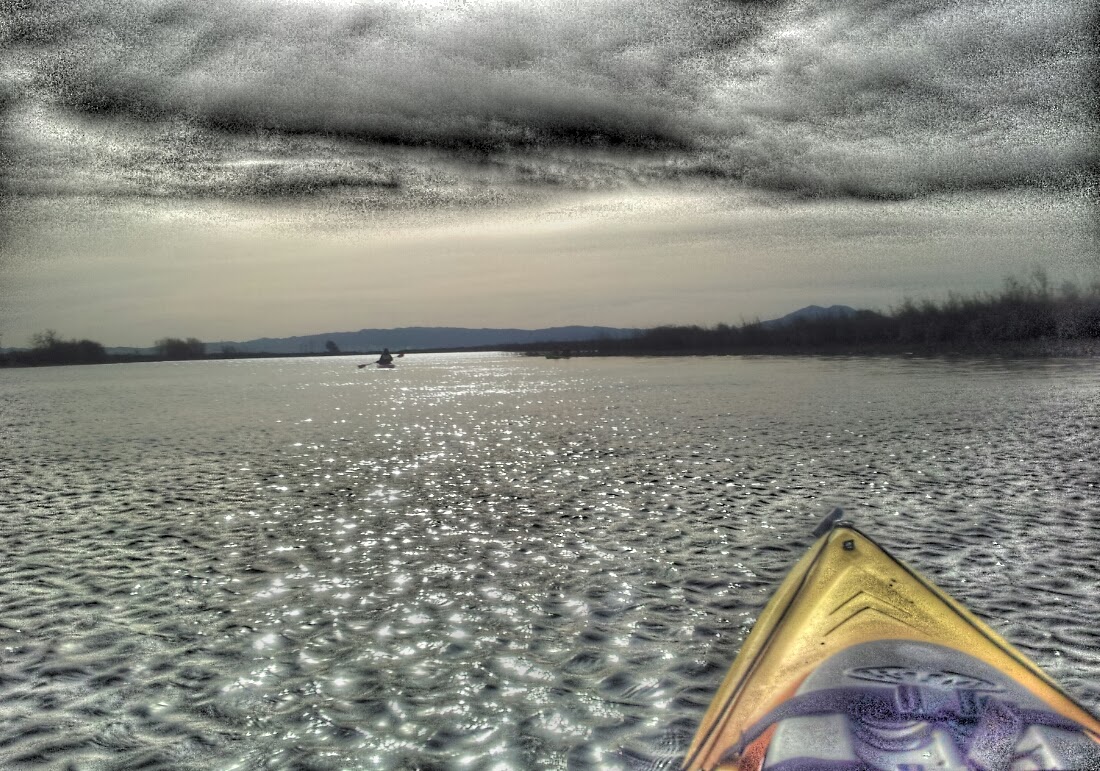 Posted by Kathy Bunton at 9:12 PM No comments: 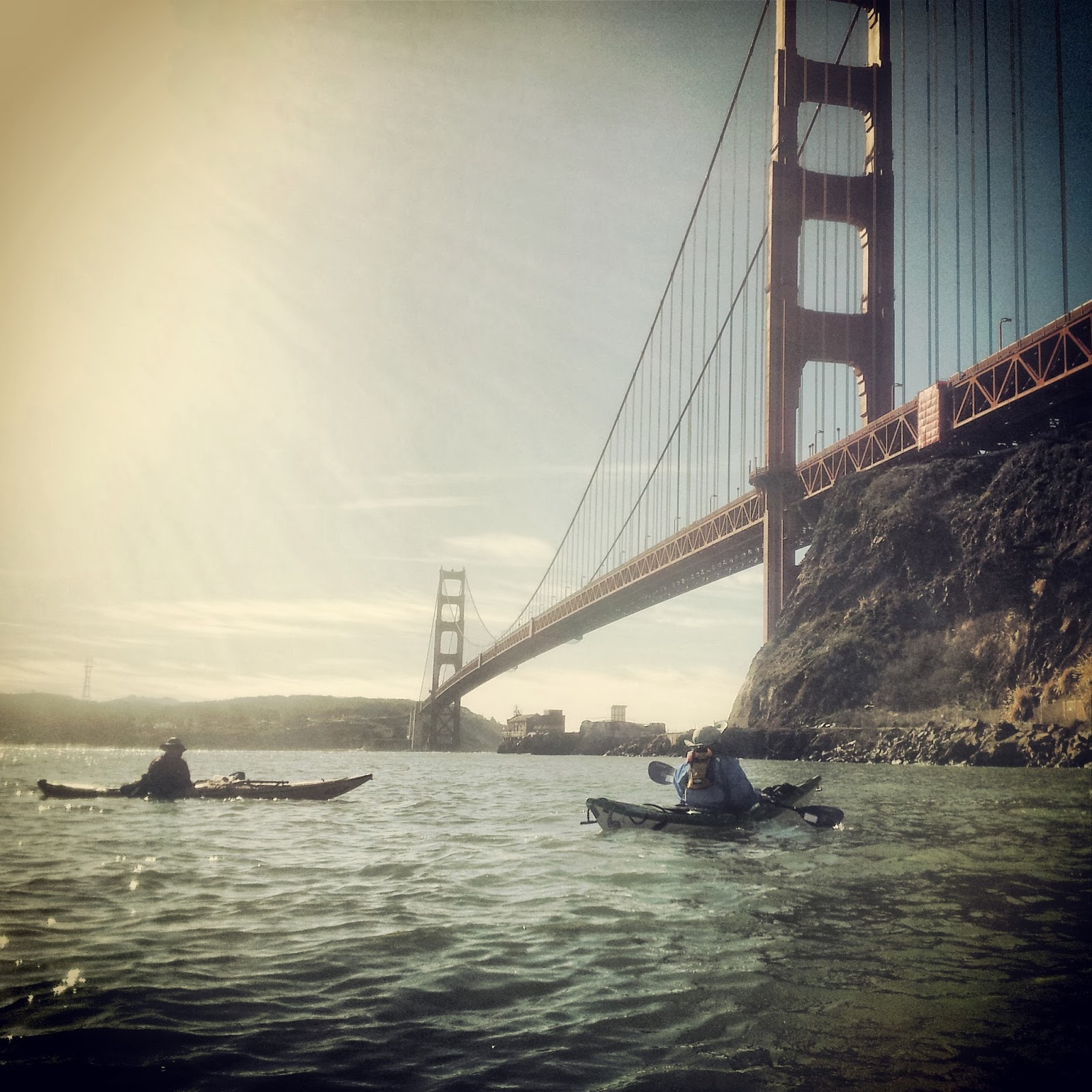 The Golden Gate Sea Kayak Symposium took place this past weekend "in one of the most spectacular and dynamic locations in the world - the Marin Headlands and San Francisco Bay." The symposium gathers some of the worlds' best instructors to share their skill and knowledge with enthusiastic and eager paddlers wanting to improve their own kayaking skills.

When I first heard of GGSKS a little over three years ago, I knew it was something I wanted to take part in. For various reasons I was unable to participate in the past but this year I made it a priority to take at least one class. I am so happy I signed up! I was especially excited to learn that Gordon Brown was teaching at this symposium. I purchased his book Sea Kayak a little over a year ago and recently purchased his set of instructional DVD's before I knew he was teaching at the symposium. So I thought it would be great to sign up for one of the classes he was teaching and I wasn't disappointed.

I registered for the Advanced Boat Control Master Class where we worked extensively on forward, sweep and bow rudder strokes. I took so much away from this class and have a lot to practice. It was great getting feedback on what I may have been doing incorrectly or what I could do better. I was finally able to perform a bow rudder without my wrists feeling like they were going to explode. Gordon and the assistant coaches Jeff and Bryant Burkhardt were very patient and encouraging. My fellow students, many of whom are BASKER's, were also kind and helpful and fun to paddle with. 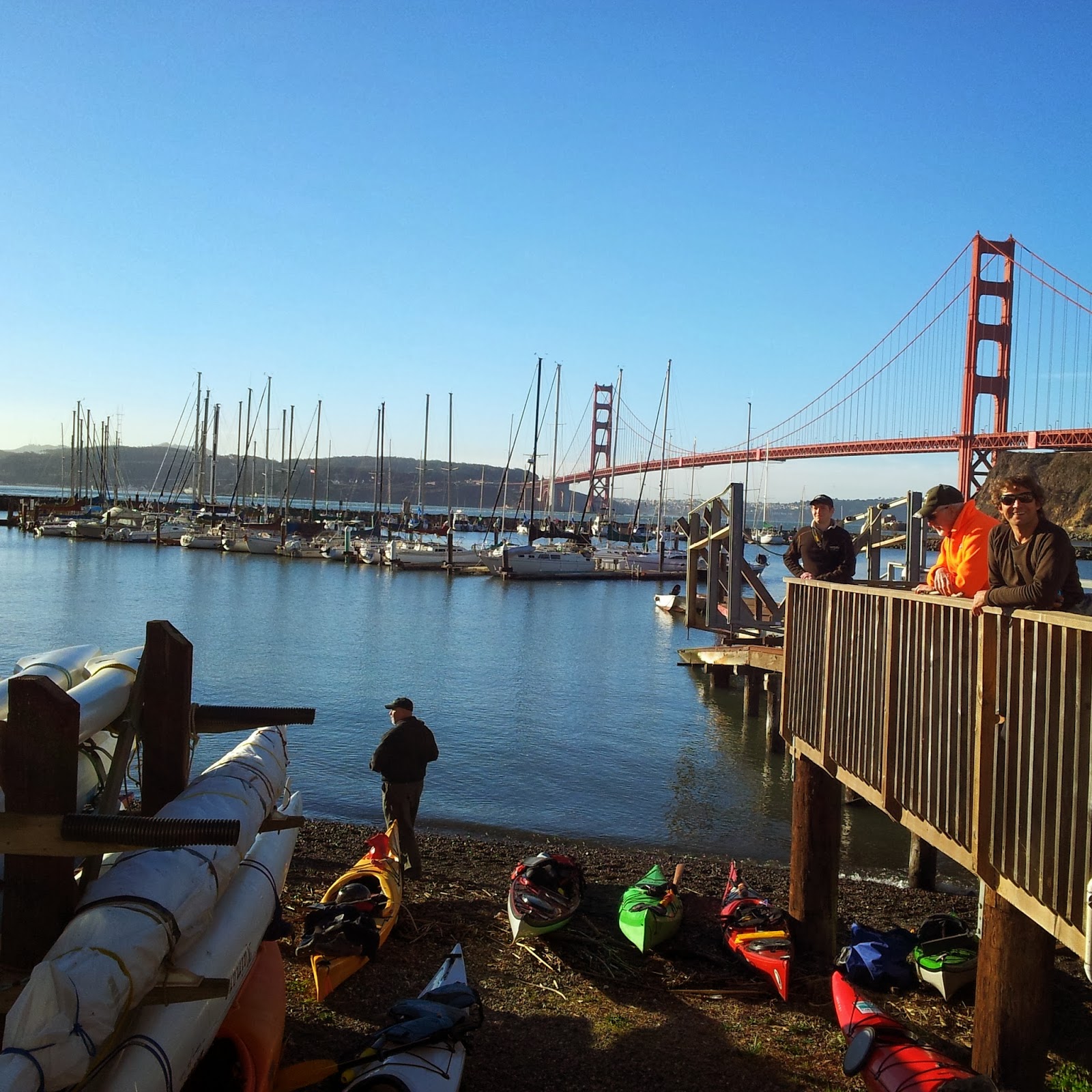 I arrived at Horseshoe Cove at 8:00 am and began getting my gear together. After donning my wetsuit and drytop I proceeded to the yacht club where the safety meeting had gotten underway. After the safety talk we broke up into our classes with our instructors and after brief introductions we warmed up with a "wicky wacky" song which not only got us loose but helped calm my nerves with a little humor. Bryant  then walked back with me to get my boat to the beach. Once settled in my boat we met up with our group on the water within Horsehoe Cove. Gordon explained to us that the class was all about what we wanted to get out of it and asked for input from the students. Basically everyone wanted to learn how to improve their strokes and soak up whatever wisdom we could gather from our instructors.

I won't go into details about what we learned but I found the class to be extremely beneficial. Gordon had hinted early that we would try to get out the gate depending on the current. When he mentioned that little tid- bit my heart began to race a little. One of my goals that I had set for myself was that someday I would paddle under the Golden Gate bridge. I had promised my husband and kids that I would wait until they were grown up because they feared I would not return. In fact, the night before, my youngest son assured me that if I went under the bridge I would surely be eaten by a great white shark.


So as we made our first attempt to pass under the bridge, these thoughts and more were racing through my head. The Golden Gate Bridge is such an icon and the waters that race below it have such notoriety that it nearly brought me to tears as I paddled against the choppy current. We were paddling against a 3-4 knot current in our first attempt and my fellow students made some progress while I seemed to be paddling for 15 minutes or so in the same spot when Jeff came along side me and reminded me to breathe. That helped change my thoughts and I proceeded to get out of the current and meet up with our group resting in an eddy.

When I reunited with our group Bryant reminded me to keep a loose grip on my paddle. This is something I tell all my clients when they paddle with me but because I was sure a shark was just waiting for me to capsize and have me for lunch, I held onto my paddle for dear life. Once my heart began to beat at a normal pace, we continued to work on sweep strokes until we could make another attempt to pass under the bridge. 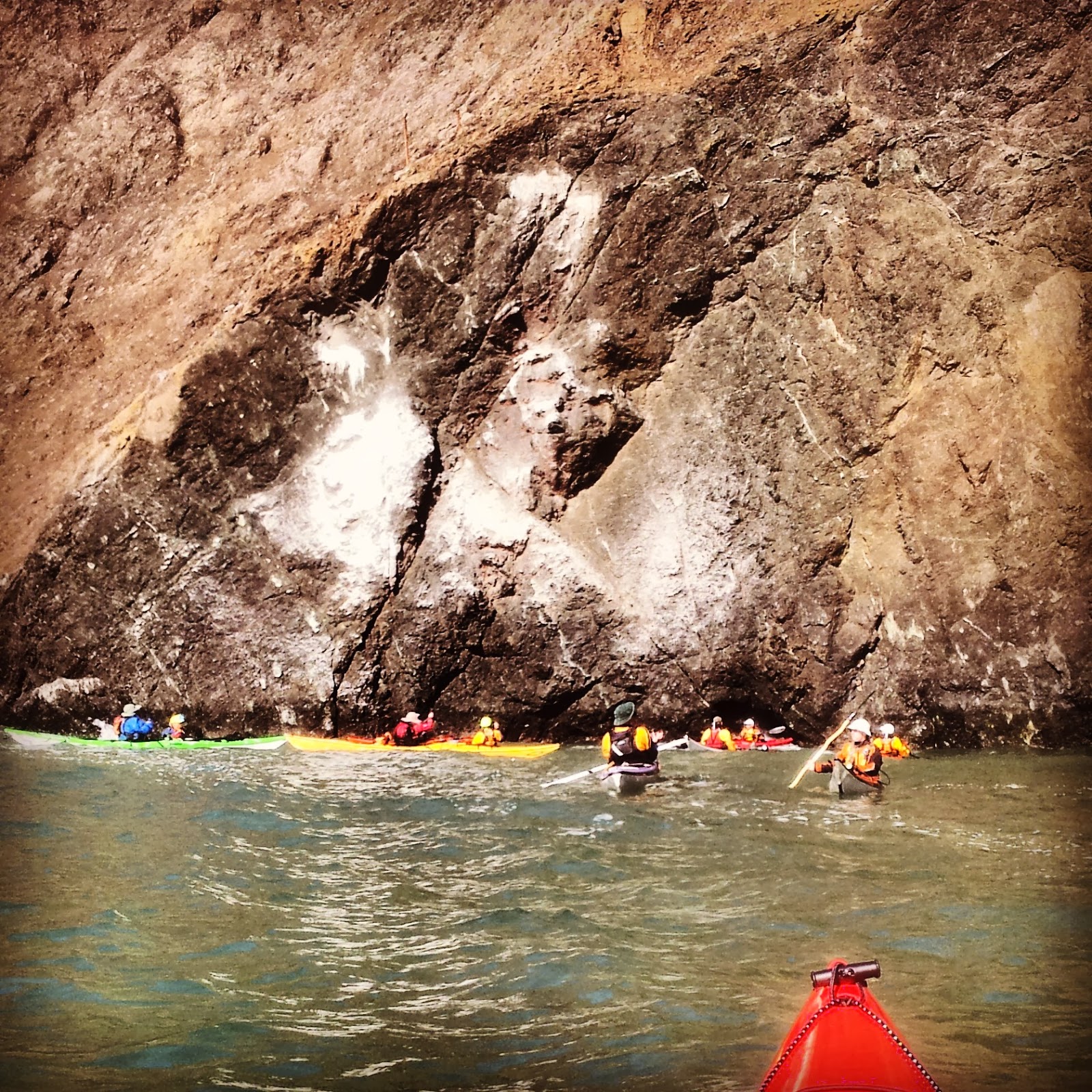 Our second attempt was successful and without incident. A few paddlers decided to paddle close to a blowhole just outside the gate and get sprayed as the water crashed against the rock wall. I stayed back and took in the fantastic view of the bridge and city in the background. Of course my GoPro battery died right before this so I didn't capture my passage under the bridge but was able to get a little life out of it to get a couple clips.


The second half of the day was no less thrilling. With the ebb running at 5 plus knots Gordon thought it would be good if we got some rough water exposure utilizing the strokes we'd been working on all day. He led us to Yellow Bluff and it appeared to be moving at a rapid pace. We proceeded to enter the rapids and attempt to retrieve tennis balls being thrown amongst us. It was quite fun and challenging with waves coming from all directions. We exited the rapids and returned to do it again when what seemed like an instant, a huge standing wave formed, the largest I have ever personally encountered (which may not be saying much but it was enormous). Gordon nonchalantly turned to us and said "we'll enter the rapid and turn around and surf some waves." I'm sure my lower jaw was resting on my sprayskirt after this pronouncement. In the blink of an eye Gordon was surfing that huge wave and making it look like a piece of cake. I decided to sit this one out and wait with a couple of others in our group for the fearless to return.

When the wave receded we regrouped and Gordon instructed us to ride the current back to the bridge and pull into the eddy just before the bridge and head back to Horseshoe Cove for debriefing. I entered the tide rip and was enjoying an exhilarating ride when I realized my cockpit was filling up with water because of a sprayskirt malfunction. Gordon noticed my plight and suggested I exit the rip and paddle calmer waters back to the cove.

During the symposium I paddled the Point 65N Whisky,(which is available for demo) and really put it to the test and it performed marvellously, even with 3 inches of water in the cockpit. ;)

Overall, I'm happy I challenged myself by getting outside my comfort zone. The event itself was top notch, well run and it was both a pleasure and a privilege to paddle with and learn from so many experienced and passionate paddlers. The only thing I would do differently is block out the entire weekend to take advantage of more classes and the festivities offered throughout the symposium.


Below are the currents predicted for Fridays classes outside Horseshoe Cove.