Waiting out the Storms 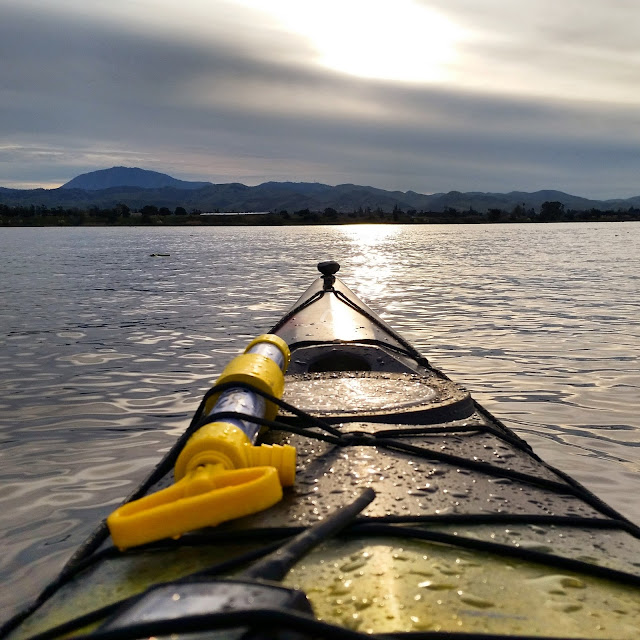 The forecast for the San Francisco Bay area predicts rain 11 out of the next 15 days. Many Northern California Rivers are expected to rise above flood stage. The Mokelumne has already risen above its' banks closing launch facilities between the Camanche Dam and Lodi Lake. The dam is currently releasing 5000 CFS into the Mokelumne and the Cosumnes River Preserve has water nearly reaching the parking lot. Nimbus dam had been releasing 35,000 CFS which is 10x the rate it normally releases but is planning on releasing 75,000 CFS beginning Monday. With these kind of flows it's best to stay off the water and stay safe! 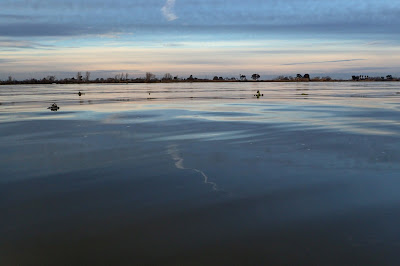 I was able to get out and paddle Friday on the San Joaquin River before the storms started to roll in. It was the "calm before the storm" and was absolutely beautiful. It was very chilly at 44 degrees at 2pm when I launched but wearing appropriate gear makes all the difference. I always dress for immersion and on Friday that meant 2 layers of thermal pants under my dry pants another two layers of synthetic shirts under my drytop, neoprene socks and booties, hat and balaclava. 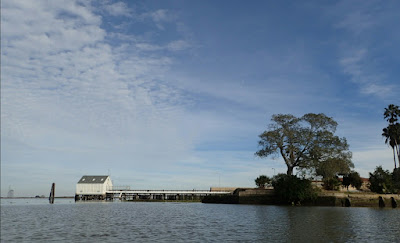 I launched from the Antioch Marina ramp at 2pm and paddled east against the 2 knot ebbing tide. It was slow going but I managed to make it to the eastern end of West Island with one rest stop near the Antioch Dunes. I paddled close to shore as much as possible to take advantage of slower current. I paddled for about an hour and a half before crossing the river to reach the shore of West Island. I knew the return home would be easy paddling and take less than half the time to get back. 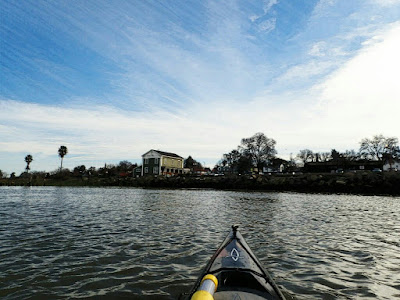 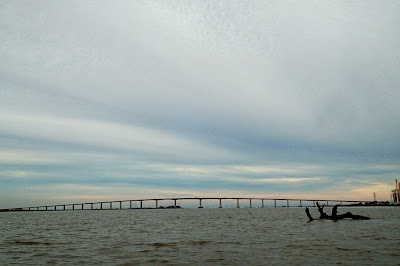 It really was an amazing afternoon. The light seemed to change by the minute, beginning with blue skies dotted with clouds and shifting to highlights of yellow and orange mixed with blues and grays. I wasn't alone while paddling because I had the company of a river otter, great blue heron, many cormorants and an emotional encounter with a beaver. I saw the beaver when I made it across the river close to West island. At first I thought it was just another beaver swimming along until I noticed he wasn't doing much swimming and seemed to be struggling to stay above water. As I got closer I noticed something poking out of his back, not through the fur but some sort of deformity. I think he may have been struck by a boat. He obviously was injured and couldn't move his tail or rear feet. I floated helplessly next to him wanting so much to just pick him up and put him in my kayak. Those big teeth of his kept me from doing so and I kept him company and prayed for God to relieve his suffering. He graciously answered my prayer and the beaver passed on before we reached the end of the island. I was saddened to see this beautiful creature die but I was also thankful for the encounter as it reminded me of how fragile our lives and our environment are and how important it is for us to be good stewards caring for our neighbors, neighborhoods and the critters that live among us. 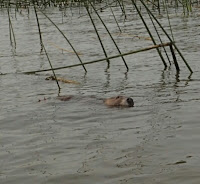 My paddle did end on a melancholy note but it was a unique experience I will always remember. 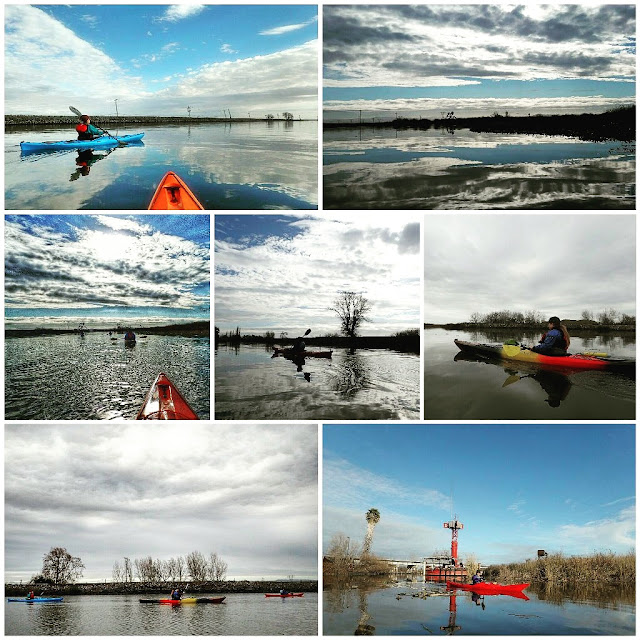 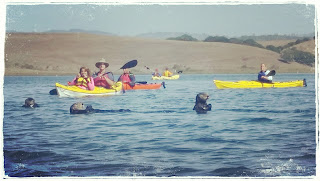 2016 was a wonderful year for paddling! We explored many tributaries, sloughs and islands within the Delta like various sections of the Mokelumne, Beaver slough, Georgianna, Sherman Lake, sections of the Sacramento and San Joaquin Rivers. Opportunities for paddling within the Delta are endless along with limitless destinations in the San Francisco Bay area. Trips to Angel Island, Richardson Bay, San Leandro Bay, Oakland Estuary, Brooks Island and the Carquinez Strait were just some of the paddles I enjoyed this past year. Highlights included paddling with bats on Lake Del Valle, observing baby sea otters with their mom's on Elkhorn Slough, watching dozens of river otters frolicking on the Sacramento River, viewing a bald eagle at Big Break and witnessing a sea lion consume salmon just feet from our kayaks.


A big thank you to all who joined me on the water in 2016, I truly appreciate your business and I'm super excited for 2017! We have lots of exciting new adventures planned including adding an introduction to sea kayaking class which will include self and assisted rescues, an adventure camp for youth and specialty tours that will include food from local delta farms. We're excited to work with the city of Antioch by providing classes, tours and rentals from the Antioch Marina. Don't forget to mark your calendar for September 16th, 2017 and join us for Coastal Clean up day where we'll pick up trash that can only be reached by kayak. 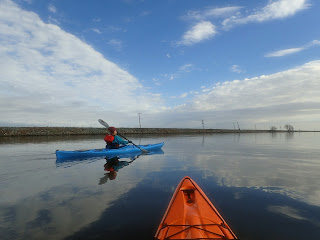 What better way to end 2016 than with a paddle on the Delta! We had a beautiful day on Old River paddling around many islands. We were surrounded by the sounds of hundreds of Tundra Swan, Sandhill Cranes and multitudes of snow geese as they  soared overhead. We were fortunate to catch a glimpse of 3 river otters foraging for food and other than a lone duck hunter and the sheriff, we had the river all to ourselves. It was an amazing day on the water with great company.