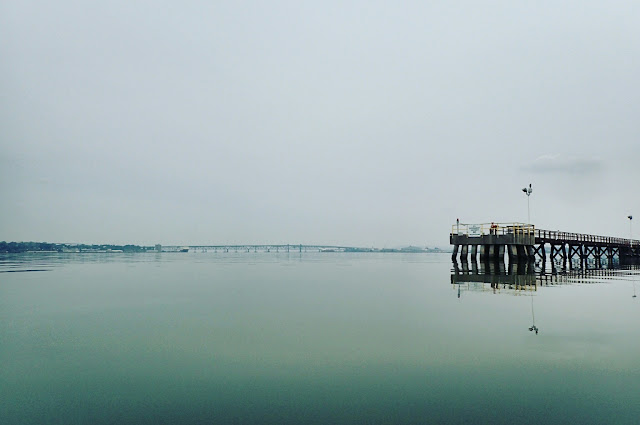 Earlier in the week I had the pleasure of paddling from Martinez with intentions of landing at Port Costa but conditions were so good we kept on paddling and ended up at Eckley Pier.

We launched from the Martinez Marina about 45 minutes after low tide and caught the remaining ebb for a ride to Port Costa. There's no charge to launch kayaks if you don't have a trailer but make sure to load gear away from ramp as not to block others from launching. Wind was forecast to be 4 knots or less from the west. 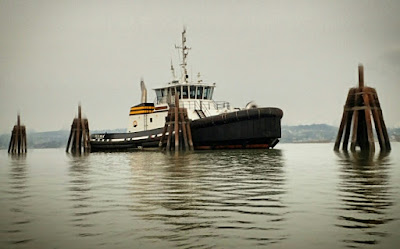 After launching we headed west on the Carquinez Strait and pointed our bows toward the Ozol pier which used to be a jet fuel storage and transfer station. The pier is highly visible being over 800 feet in length and 270 feet offshore. We made our way closer to shore and paddled under the pier. Just past the pier, we encountered a beautiful tugboat, the Delta Billie. She had her engines idling while waiting for her ship to come in.

We continued paddling close to shore as we made our way to Port Costa. The shipping channel is extremely close to shore so we were careful to stay out of the channel and keep our eyes open for approaching ships. We reached Port Costa after an hour of paddling which meant we were moving quickly averaging over 4 mph at a leisurely pace so we decided to continue and head for Eckley Pier. 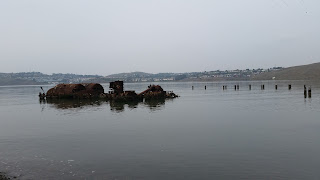 We reached Eckley Pier in no time and landed on a gravelly beach on the west side of the pier. Eckley pier is part of East Bay Parks Carquinez Strait Regional Shoreline and is a beautiful park with miles of hiking trails. We enjoyed a snack at the park and there are restrooms available with flush toilets on the other side of railroad tracks. According to Outdoorproject.com this was "the site of a small village, brick-making plant, and the famous Garden City Ferry, the area now features a park with an open grassy area, a half-dozen picnic tables and the remnants of an old brick structure."

We departed the park and paddled around a huge structure in the water that looked like some sort of kiln, presumably left over from the brick-making plant. We caught the flooding tide and paddled on glassy water taking time out to watch a seal swimming close to shore looking for an easy meal from fishermen on shore. We also witnessed a large fish jump clear out of the water going after something on the surface. 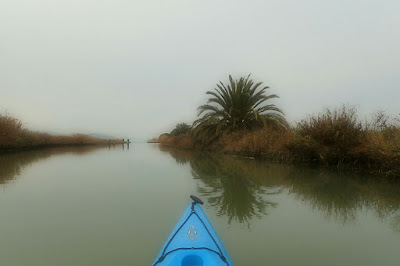 Before heading back into the marina, we took a detour up Alhambra creek. After a little exploring we noticed it was getting dark quickly so we returned to the marina in fading light. There is a fishing pier very close to the entrance of the marina so be watchful of fishing lines to avoid getting tangled. It was a lovely paddle and I could hardly believe the calm water conditions. I look forward to returning!

Posted by Kathy Bunton at 9:57 AM No comments: 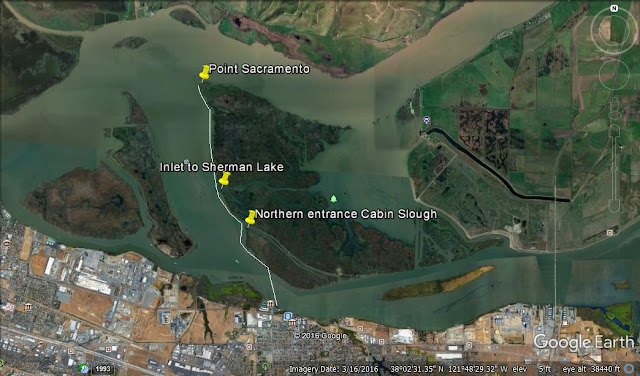 Trip #2 in our series on day trips from Antioch is a paddle for more experienced kayakers. It's a minimum of 3.5 miles one way to Point Sacramento which can be done in an hour if timed properly with tides but you'll want more time to explore on the way.

Things you want to consider before launching are tides, weather/wind and water temperature. Always dress for immersion, do not wear cotton and wear a PFD. Check wind forecast and if wind is forecast 10+ MPH reconsider launching. It doesn't take a lot of wind to create 3-4ft rollers on this section of the San Joaquin. Launch a minimum of an hour before low tide to get the most help from the current. There aren't any places to bail out or stop and stretch until you reach Point Sacramento.


After launching from the Antioch Marina, cross the San Joaquin and head northwest along the shoreline of Kimball Island. You'll be crossing the shipping channel so be sure there are no ships in sight. This area can be busy with other boat traffic so make sure to be alert and make yourself highly visible. Once reaching Kimball, stay within 15 feet of shoreline to stay out of shipping channel and follow until you reach Point Sacramento.


Your first possible detour is Cabin Slough. There's usually raptors hanging out in the trees at the entrance and there are a couple of openings that beckon exploration within a half mile. If you continue to head northwest you'll reach another large inlet that leads to Sherman Island. You could spend all day exploring a fraction of the passageways within Sherman Island. Make sure you have a GPS and be cautious at tides 1 ft or lower to avoid getting stuck in mud. It's easy to get lost in here so keep track with your GPS. 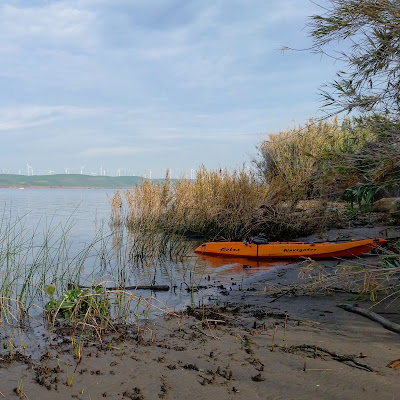 Approximately 1.25 miles northwest from the inlet, you'll reach Point Sacramento. There is a sandy beach although it can disappear with a high tide. Be cautious here as the current can be very strong. If you time your paddle with the tides and reach Point Sacramento at slack or just as the tide begins to flood, your paddle back to the Antioch Marina should be an easy one and you could potentially do very little actual paddling and just ride the tide home. Remember to keep an eye out for ships before crossing the river back to the marina.

Posted by Kathy Bunton at 1:26 PM No comments:

Save 10% on Gift Cards - Limited Time 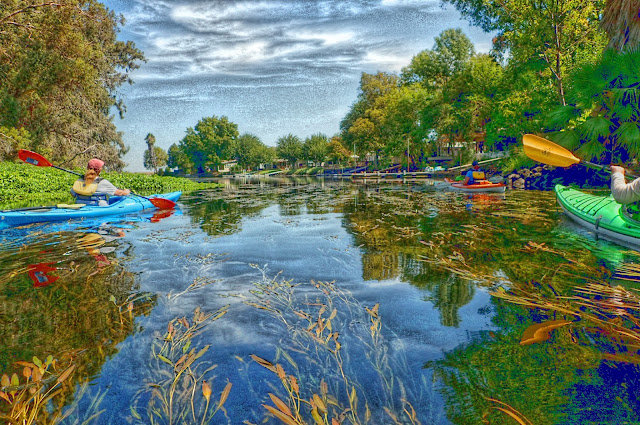 Get 10% off your purchase of gift cards now through December 14th! Gift cards do not expire and can be used towards any tour, class, kayak or paddleboard rental. Click HERE to purchase gift card and use save10 for promo code.

Check our calendar for upcoming tours and classes!

We appreciate your business and look forward to helping you explore the California Delta!

Posted by Kathy Bunton at 7:02 PM No comments: